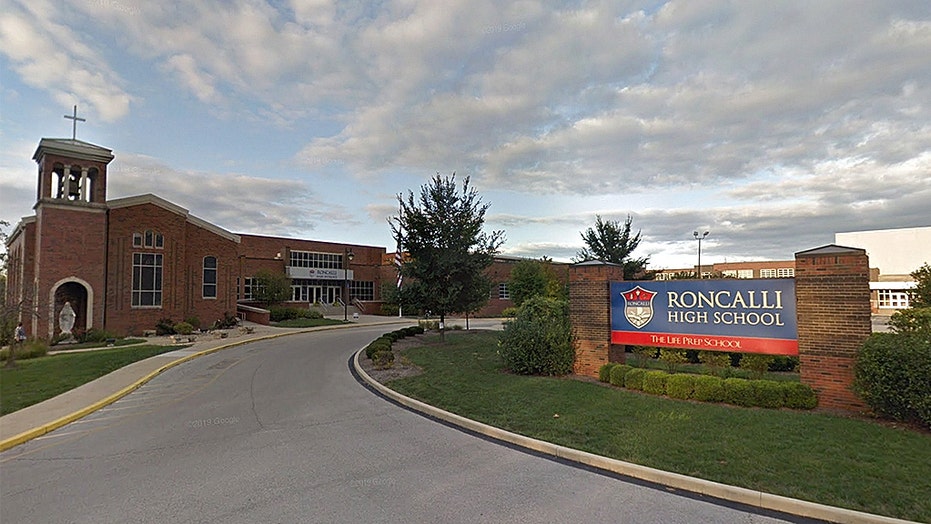 Four Indiana high school football players are under investigation for allegedly assaulting and bullying their 15-year-old team manager, who has Down syndrome, before the squad's homecoming game Sept. 27.

The athletes from Roncalli High School in Indianapolis are accused of forcing the boy to lick another student's nipple in the locker room, an alleged assault the mother says wasn't the first incident.

“My child is forever changed because of what they did to him,” said Lesli Woodruff, who added the incident was the second time in three weeks that her son has been harassed, according to FOX59.

The four athletes from Roncalli High School in Indianapolis are accused of forcing the boy to lick another student's nipple in the locker room before the game, which she says has changed her son "forever." (Google Maps)

On Sept 9. Woodruff says her son mentioned at dinner that "something disturbing" happened during football practice.

He told her a football player had snuck up behind her son and recorded a video of him using the bathroom -- with the goal of posting the video to Snapchat.

“We went in and we met with the Dean and he admitted to us that his number one priority was to get rid of the video. His job was to watch the video, but he didn’t watch the video as he was required to,” Woodruff told the outlet.

An investigation by the Dean of Students, Tim Crissman, found the video was never posted to Snapchat, but the boy who took the video showed it to Crissman and they deleted it together, according to IndyStar. The boy reportedly received a punishment of after-school detention.

A month later, Woodruff says she received an anonymous letter in the mail regarding another case of abuse involving her child.

"They were telling me this because they were afraid that nothing would happen," Woodruff said.

Woodruff says her son had dreamed of attending Roncalli High School for years, adding he idolized the team, which has won nine state championships.

"That's all he'd talk about. Going to Roncalli was something very important to him," she said. "He's always just had this love and wanted to be a Rebel. We thought it would be the perfect environment for him."

She said that Roncalli was chosen as a school so her child wouldn't have to be segregated into separate classes for his disability -- adding that until the incident, everything was perfect.

“We absolutely felt like he was welcomed into that school community with open arms,” Woodruff told IndyStar. “Until this happened, I didn’t have any reason to believe otherwise.”

The second incident, during which their was allegedly 11 people present, caused Woodruff to file a police report.

“Things have been pushed under the rug and kept quiet and people don’t think they have a voice and certainly when they did this to my son, they took away his voice,” Woodruff told FOX59.

The Archdiocese of Indianapolis released a statement regarding the alleged incident.

"We are aware of an incident that occurred between students. Roncalli High School staff learned of the alleged incident and reported it to the Department of Child Services. Roncalli and the Archdiocese of Indianapolis are cooperating with the Indianapolis Metropolitan Police Department during this ongoing investigation," it read.

The statement added: "While we will not discuss disciplinary consequences enforced in response to the actions of individual students, please know that any student responsible for bullying and/or inappropriate conduct toward another student has been and will be disciplined appropriately, as outlined in the school’s Parent-Student Handbook. Thus far, students have been suspended and one is no longer attending Roncalli. Following the outcome of the police investigation, further action may be taken."