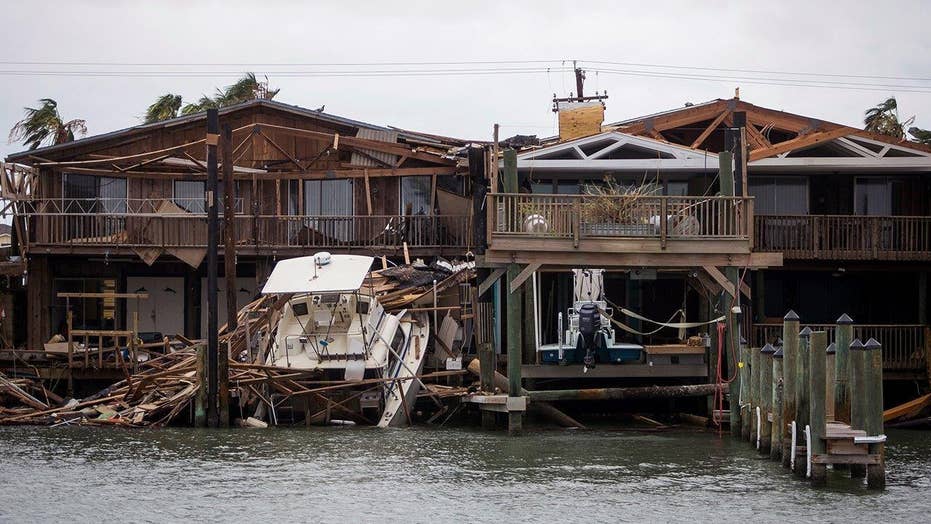 Many Harvey victims do not have flood insurance

The Houston that was battered by Hurricane Harvey is an economic powerhouse whose influence reaches far beyond its region, leading many to worry about when its economy be able to stand up again.

Houston produces the plastic used in everything from sports cars to baby bottles and is part of a low-lying coastal region that supplies nearly a third of U.S. oil-refining capacity. As the fourth-largest U.S. city, with 2.3 million people, it is also headquarters for 20 Fortune 500 companies.

"There's nothing being sold, nothing being manufactured and nothing being shipped in a city with a $500 billion economy," says Patrick Jankowski, an economist with the Greater Houston Partnership, which promotes regional economic development. "Nothing is happening in Houston except rescues and people watching people get rescued."

"Greater Houston is a major engine of the U.S. economy," IHS Markit says. Its port is the second-busiest in the United States. Its two airports handle 26 million passengers a year. And its world-class cancer center processes 13,000 cases a week, many of them booked by patients flying in from abroad.

If it were an independent country, Houston would boast the world's 23rd-biggest economy, just below Sweden and just above Poland.

Forecasters aren't yet sure exactly how high the economic damage will go, how far it will spread or how long it will last. The more than 50 inches of rain that flooded Houston left much of the city underwater and its manufacturing base all but immobilized.

Transportation — for residents, employees and businesses — is snarled. Houstonians are trapped in their homes or in shelters, unable to get around because the roads are flooded. The Port of Houston is closed, and flights are still limited at Houston's George Bush Intercontinental Airport.

Macroeconomic Advisers, a forecasting firm, calculates that economic damage from Hurricane Harvey could shave between 0.3 and 1.2 percentage points off the nation's economic growth in the July-September quarter. Before the storm, the economy had been expected to grow at an annual rate of about 3 percent from July through September.

"The nation is going to find out how important Houston is to the rest of the economy," Jankowski says "The dashboard in a Ford manufactured in Michigan or the plastic valve made in Indiana or the piece of costume jewelry in Rhode Island or a case for your computer in California — if it has plastic in it, it's highly likely the plastic originated in Houston."

Still, analysts note that the economic losses inflicted by Harvey are likely to be recouped once Houston's rebuilding begins. And some sectors of the area's economic base may have been less damaged that initially feared.

Robert Gilmer, director of the University of Houston's Institute for Regional Forecasting, notes, for example, that the area's refineries and petrochemical plants mostly escaped serious damage and are likely to be running again within weeks. He says authorities shut them down largely out of "abundance of caution. ... You realize that people just can't get to work or that getting them to work is dangerous."

The economic blow comes just as Houston was beginning to regain its footing after oil prices had tumbled into a freefall in mid-2014, bottoming just over $26 a barrel in January 2016, forcing cutbacks in the energy industry.

"Houston was just digging out and beginning to turn around," says Edward Friedman, an economist at Moody's Analytics. "Now it's going to be down again for several months."

Soon, though, insurance money and government aid will likely pour in, and building reconstruction and car purchases should help accelerate growth.

"Auto sales will go through the roof for a month or so" as Houstonians replace cars that were washed away or wrecked by the flooding, Gilmer predicts.

Harvey destroyed 1,000 homes in Texas and damaged an additional 50,000, leaving more than 30,000 people in shelters across the state. Roofers, electricians, carpenters and other construction workers will likely be busy building new houses and rewiring, repainting and ripping out and replacing moldy carpeting in old ones.

"There's going to be 18 months' worth of work here," Gilmer predicts. That would be helpful for the city, which has lost 8,300 construction jobs over the past year and has an above-average unemployment rate — 4.9 percent, vs. 4.3 percent nationwide.

Gilmer says he thinks the Houston economy will enjoy a "short-lived burst of activity," just as did when it hosted the 2004 Super Bowl and two 2005 World Series games and when it rebuilt after Hurricane Ike in 2008.

The economists at BBVA Research worry, though, that Harvey may leave long-term scars on the Houston economy. They write that "devastating weather events may force people to move out and deter both future investment and migration, thereby reducing economic potential."

New Orleans is a cautionary tale: Twelve years after Hurricane Katrina's destructive wallop, the Crescent City still has 7 percent fewer jobs than it had before.

But economist Jankowski, noting that Houston has endured oil busts and natural disasters before, said he was fairly confident in the city's ability to rebound.