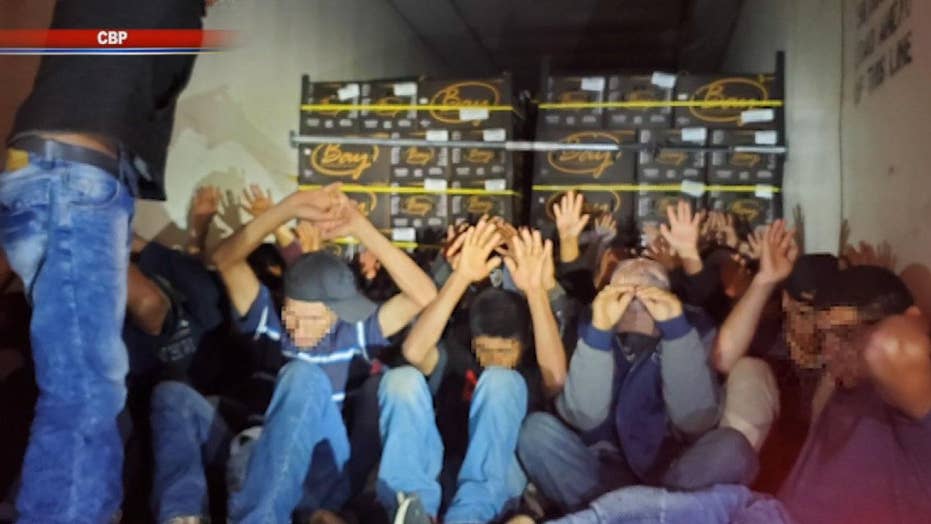 U.S. Customs and Border Protection agents reveal photos of men, women and one unaccompanied minor crammed inside a refrigerated truck at Arizona checkpoint.

Two men are facing federal human smuggling charges after dozens of illegal immigrants were discovered locked in refrigerated semitrailer Monday night at an immigration checkpoint in southern Arizona, according to officials.

U.S. Customs and Border Protection said in a news release that agents inspected the trailer after a trained dog alerted them. When agents opened up the trailer, they discovered 32 Mexican and Ecuadorian nationals, all in the country illegally, hidden in the produce cargo.

The immigrants discovered in the truck ranged in age from 16 to 53, and most were clad in long pants and short-sleeved T-shirts.

The trailer's interior was 47 degrees, "potentially endangering the illegal immigrants locked inside," according to CBP.

Curran told FOX10 the truck traveled up Interstate 19 until it reached the checkpoint where K-9's detected suspicious activity.

The trailer was 47 degrees at the time, and most were clad in long pants and short-sleeved t-shirts inside. (U.S. Customs and Border Protection)

"We refer vehicles to secondary where we get a better look and understanding of what is going on where we utilize this X-ray technology, which is a huge benefit," Curran said.

BRITISH FAMILY DETAINED AFTER MAKING WRONG TURN ON VACATION IN CANADA, CROSSING BORDER INTO US

The 31-year-old driver and 30-year-old passenger, who are U.S. citizens but were not named, were arrested and charged with felony human smuggling violations.

The group was discovered inside the trailer by using X-Rays, which showed dozens locked inside. (U.S. Customs and Border Protection)

The 32 people discovered in the trailer were being processed at the Nogales port of entry for immigration violations, according to CBP.

Homeland Security officials said they've intercepted several human smuggling attempts involving semitrucks in the Tucson Sector so far this year. The White House commented on the incident Tuesday, saying on Twitter "Smuggling humans in commercial vehicles is not only unlawful: It places the passengers in extreme danger."

"If there is an accident, these people are going to be violently thrown in the back of this trailer because there are no restraints or consideration for the people being smuggled," he said.