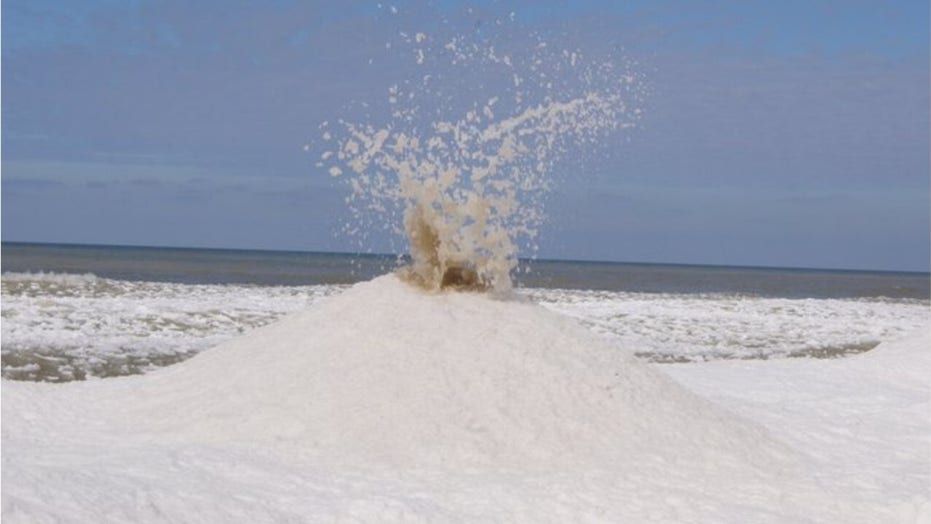 'Ice volcanoes' are common on Michigan beaches during the winter. Find out what this cool phenomenon is.

The National Weather Service in Grand Rapids said the sight was captured Sunday at Oval Beach in Saugatuck, Mich.

"You never know what you'll find at the lake until you go out there," the NWS tweeted. "Today it was volcanoes."

According to Michigan Tech, ice volcanoes are a common feature in the winter months along the northern shore of Lake Superior -- north of the volcanoes.

Ice volcanoes are cone-shaped mounds of ice formed as part of the leading edge of an ice shelf as they build out into a lake. Despite having "volcano" as part of the name, they do not erupt hot, molten magma.

"Ice volcanoes" can be seen erupted on Sunday along the shore of Lake Michigan. (National Weather Service Grand Rapids)

Researchers at Michigan Tech noted, "after the ice shelf has built out, waves continue to travel underneath the ice and are forced up through cracks and previously formed cones."

Cort Spholten, a meteorologist with the NWS Grand Rapids, told the Detroit Free Press that ice volcanoes tend to form on shorelines where waves strike "with some force."

"The waves...were strong enough so the water channels through, it squeezes water upwards and tosses the floating ice up," Spholten told the Free Press. "As it happens, over the course of hours or days, it forms a cone, and it resembles a volcano."

Researchers at Michigan Tech said that ice volcanic cones can range in size from less than 1 meter to greater than 8 meters high, with the largest cones typically near offshore sand bars and rock reefs.

"Ice volcanoes" tend to occur on locations on the shoreline where waves strike with force. (National Weather Service Grand Rapids)

Tom Niziol, the former chief meteorologist for the NWS in Buffalo and winter weather expert for the Weather Channel, commented on Twitter that the images from Michigan on Sunday were "some of the best ice volcano photos I have seen" and that ice volcanoes also have been previously seen on the east end of Lake Erie.

"They can be very dangerous to climb on however because they are hollow and built over that hole in the ice," he shared on Facebook. "Don't ever go venturing out onto them!!"

The ice volcanoes were not the only strange sight on the shores of Lake Michigan this weekend.

Thousands of ice balls formed and washed along the shore of Lake Michigan on Friday. (Holland State Park/Michigan Department of Natural Resources)

A rare phenomenon known as "ice balls" was spotted Friday washing up at Holland State Park, about 30 miles west of Grand Rapids. According to the Weather Service, ice balls form when temperatures are just below freezing along shallow beaches. A layer of floating slush is sculpted by waves into spheres.

"These balls of ice then wash up on the beach by the thousands and freeze solid," the Weather Service said.