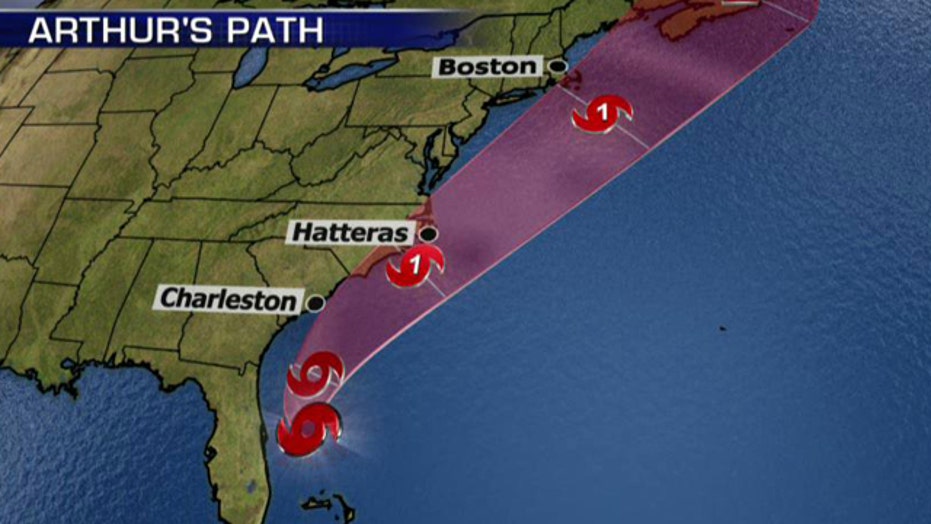 Dare County officials ordered a mandatory evacuation for residents and visitors on Hatteras Island shortly after the National Weather Service issued the hurricane warning for Surf City, N.C. north to Duck. A tropical storm watch was in effect for parts of Florida and South Carolina.

The storm's maximum sustained winds late Wednesday were near 70 mph. The U.S. National Hurricane Center said Arthur was expected to strengthen and become a hurricane by Thursday.

With the July Fourth weekend on the horizon, the Atlantic hurricane season's first named storm plodded off Florida's coast but wasn't yet spooking too many in the storm's potential path.

"I think everybody's keeping one eye on the weather and one eye on the events this weekend," said Joe Marinelli, president of Visit Savannah, the city's tourism bureau.

It was centered about 435 miles south-southwest of Cape Hatteras, North Carolina late Wednesday.

The system has sent a lot of moisture to South Florida already, the Miami Herald reported. On Monday, parts of Miami Beach received as much as 3.5 inches, while the Doral area also topped three inches and Miami International Airport received less than two inches.

Red flags warned of rough surf, and beachgoers were advised to get into the water only in areas with staffed lifeguard stands. But overall, Witcher said, "it's business as usual."

Red flags also flew Tuesday at Daytona Beach. By midday, a dozen swimmers had been aided by lifeguards when they got caught in a rip current. On any given day, 15 to 20 swimmers need help, said Tammy Marris, spokeswoman for the Volusia County Beach Patrol.

Near the storm, 19 ill crew members were evacuated from a South Korean cargo ship after they showed signs of food poisoning. The cargo ship JS Comet was anchored 3 miles off Cape Canaveral, and the Coast Guard reported that deteriorating weather conditions were one factor in the decision to evacuate.

In North Carolina's Outer Banks, officials said they would close Cape Lookout National Seashore at 5 p.m. Wednesday and reopen when it's safe.

The motel Shutters on the Banks was completely booked for the holiday weekend, general manager John Zeller said, despite forecasts for potentially heavy rain, gusty winds and isolated tornadoes late Thursday and Friday.

"We have received some cancellations but not too many," he said. "Basically we are telling people to kind of wait and see what happens."

The motel has a 72-hour advance notice on cancellations, but Zeller said it will be waived if the storm tracks toward the area or warnings are issued.

In Folly Beach, South Carolina, dozens of people fished from the pier under sunny skies Tuesday. Others surfed on gentle swells, sunbathed and looked for shells.

In Savannah, rooms in the downtown historic district were expected to be at least 80 percent full for the holiday weekend, when crowds pack the beach on neighboring Tybee Island.

Amy Gaster said her Tybee Island vacation rental company had more than 200 beach homes and condos booked for the weekend, likely to be the busiest of the year. If forecasts start to show a serious threat, Gaster said her staff was prepared to send alerts to guests' cellphones.

But as long as Arthur stays offshore, she said her biggest concerns are rip currents and possible thundershowers on Thursday, when thousands are expected to pack the Georgia coast's largest public beach for fireworks.

"Hopefully Mother Nature is going to cooperate with us this year," Gaster said.

Forecasters with the National Oceanic and Atmospheric Administration have predicted a slow hurricane season for 2014 with eight to 13 tropical storms, the Miami Herald reported. They say three to six could grow into hurricanes and two may become major storms packing winds over 111 mph. On average, 12 named storms form, with six turning into hurricanes and three strengthening to major storms.

Click here to read more from the Miami Herald.