Hurricane Laura: National Hurricane Center director warns of areas that are ‘not survivable’ when hit

Ken Graham, Director of the National Hurricane Center, warns of the potentially devastating impact Hurricane Laura could have on those along the Gulf Coast and urges residents in danger zones to evacuate before it’s too late.

An intensifying Hurricane Laura grew stronger by the hour Wednesday over the Gulf of Mexico as forecasters said the system strengthened into an "extremely dangerous" Category 4 storm, spawning a storm surge that's already swamped parts of the Gulf Coast.

The U.S. National Hurricane Center (NHC) in Miami said Wednesday after that Laura, now a major hurricane, has exploded into a Category 4 storm, threatening to bring life-threatening storm surge, extreme winds, and flash flooding over eastern Texas and Louisiana. It is expected to make landfall overnight, then undergo a "rapid weakening" over land.

As of 5 p.m. EDT, the storm was located less than 200 miles south-southeast of Lake Charles, La., moving northwest at 15 mph with maximum sustained winds of 145 mph. 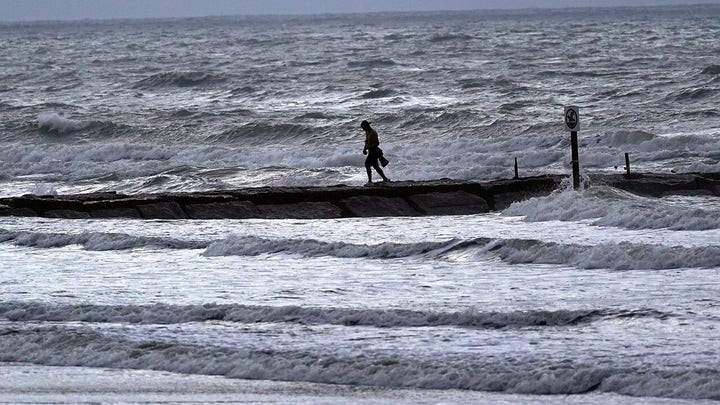 "Little time remains to protect life and property," the NHC said in its latest advisory.

Laura is now a dangerous Category 4 hurricane that continues to intensify in the Gulf of Mexico and bring impacts to coastal areas as it edges closer.

A strengthening Hurricane Laura can be seen over the Gulf of Mexico on Wednesday, Aug. 26, 2020.

Impacts and hazards from the storm are already widespread – not just where the center of the storm makes landfall.

HURRICANE LAURA FORCES EVACUATIONS OF OVER HALF A MILLION IN TEXAS, LOUISIANA AHEAD OF LANDFALL

A life-threatening and "unsurvivable" storm surge of 7 to 20 feet will inundate the coast just east of the trajectory of the center of the storm. A storm surge warning is in effect from Freeport, Texas to the mouth of the Mississippi River.

According to the NHC, the worst of the storm surge will be along the immediate coast near and to the right of the landfall location, where the surge will be accompanied by "large and destructive waves."

"Unsurvivable storm surge with large and destructive waves will cause catastrophic damage from Sea Rim State Park, Texas, to Intracoastal City, Louisiana, including Calcasieu and Sabine Lakes," forecasters said. "This storm surge could penetrate up to 30 miles inland from the immediate coastline in southwestern Louisiana and far southeastern Texas."

Even with hours before landfall, the Lafourche Parish Sheriff’s Office said that LA 1 was closed south of Leon Theriot Lock in Golden Meadow due to rising storm surge in the area.

Video from the sheriff's office showed water rising over the highway as winds gusted in the background.

A National Weather Service meteorologist in Lake Charles, Louisiana — in the bullseye of Laura’s projected path — delivered an urgent warning on Facebook Live for people living south of Interstate 10 in southwest Louisiana and southeast Texas. 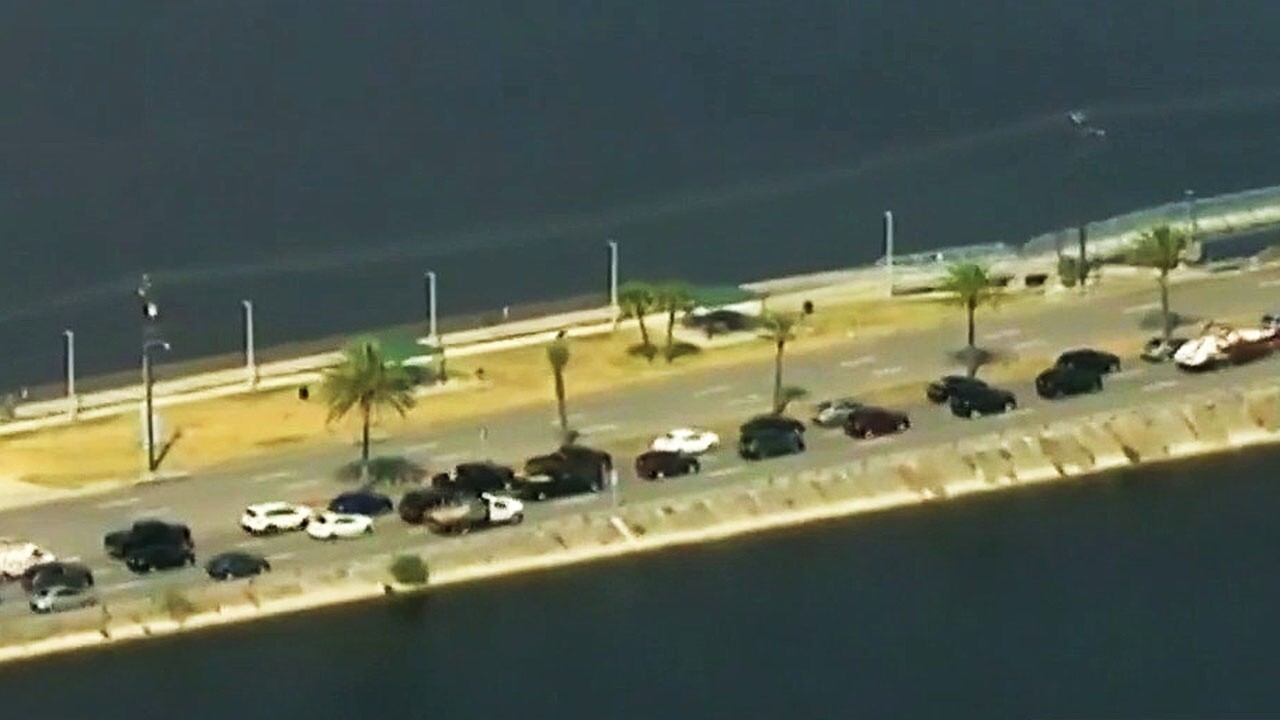 Mandatory evacuation orders issued for Galveston, Texas ahead of hurricane

“Your life will be in immediate and grave danger beginning this evening if you do not evacuate,” Donald Jones said.

Forecasters said the Calcasieu River in Lake Charles may crest at 15.6 feet, surpassing the 13-foot record.

Laura has undergone a remarkable intensification, growing nearly 70 percent in power in just 24 hours “and there are no signs it will stop soon," the NHC said in a briefing early Wednesday.

President Trump urged those in Texas, Louisiana, and Arkansas to listen to their local officials as the storm heads toward the Gulf Coast and then moves inland.

"Hurricane Laura is a very dangerous and rapidly intensifying hurricane," the president tweeted.

Category 4 storms bring "catastrophic damage," with well-built framed homes at risk of losing most of the roof structure and exterior walls.

"Most trees will be snapped or uprooted and power poles downed. Fallen trees and power poles will isolate residential areas," the NHC states on an overview of damage from similar-sized storms. "Power outages will last weeks to possibly months. Most of the area will be uninhabitable for weeks or months."

PHOTOS: LAURA NOW FORECAST TO BE A CATASTROPHIC CATEGORY 4 HURRICANE

National Guard units in both Texas and Louisiana were also preparing Wednesday to aid first responders by land, air and water, authorities said. They are equipped with hundreds of high-water vehicles, dozens of boats and aircraft as well as massive stockpiles of drinking water and military rations.

“Louisiana National Guard has more than 3,000 Guardsmen ready to provide support to civilian authorities and has 921,000 liters of water and 528,000 MREs (meals ready to eat) to support citizens, if needed,” said Maj. Noel Collins.

Army and Air Force installations have also started moving personnel and equipment due to the storms.

The Air Force’s 53rd Weather Reconnaissance Squadron Hurricane Hunters, known for flying into storms to collect vital data, relocated their operations from Keesler Air Force Base in Mississippi to the Atlantic Aviation Charleston International Airport in South Carolina ahead of the storm. Aircraft from Eglin, Keesler and New Orleans had also been moved in advance. Additional aircraft from Joint Base Ellington Field and Barksdale Air Force Base were beginning to move out Wednesday.

The Army removed more than 4,500 soldiers from Fort Polk’s training areas to more secure buildings in the main post and was transferring its aviation assets to Fort Bragg in North Carolina, according to Lt. Col. Mary Ricks, an Army spokesperson. The recruiting station in Lake Charles, near the Texas-Louisiana border where Laura is expected to land, was also evacuated of all recruiters and their families.

Hurricane-force winds for several hours will cause damage to homes, businesses, and trees.  Power outages are also expected.

A hurricane warning is in effect from San Luis Pass, Texas to Intracoastal City in Louisiana.

Flooding will also be widespread from the hurricane. Anywhere between 5 to 10 inches of rain is expected, with isolated totals of 12-15 inches which will cause dangerous conditions along the coast and well inland.

Landfalling tropical systems can spawn tornadoes, and that will be expected over parts of the Lower Mississippi Valley from Wednesday night into Thursday morning.

The tornado threat through late Wednesday due to Hurricane Laura. (Fox News)

The storm has forced the evacuation of more than half a million people along the Gulf Coast.

Evacuees, from right to left, Tommie McNeil, Elisabeth Pelham, Nota Norris, and a woman who did not want to be identified, wait to board a bus as they evacuate, Tuesday, Aug. 25, 2020, in Galveston, Texas. (AP Photo/David J. Phillip)

More than 385,000 residents were told to flee the Texas cities of Beaumont, Galveston, and Port Arthur, and another 200,000 were ordered to leave low-lying Calcasieu Parish in southwestern Louisiana, where forecasters said as much as 13 feet of storm surge topped by waves could submerge whole communities.

"If you decide to stay, you’re staying on your own,” Port Arthur Mayor Thurman Bartie said.

Louisiana Gov. John Bel Edwards said Laura is shaping up to look a lot like Hurricane Rita did 15 years ago when it ravaged southwest Louisiana.

Municipal workers fill sandbags for the elderly and those with disabilities ahead of Hurricane Laura in Crowley, La., Tuesday, Aug. 25, 2020. (AP Photo/Gerald Herbert)

“We’re going to have significant flooding in places that don’t normally see it,” he said.

Fearing that people would not evacuate in time, Edwards said those in southwest Louisiana need to be where they intend to ride out Laura by noon Wednesday, when the state will start feeling the storm's effects.

Officials urged people to stay with relatives or in hotel rooms to avoid spreading coronavirus. Buses were stocked with protective equipment and disinfectant, and they would carry fewer passengers to keep people apart, Texas officials said.

Laura passed Cuba after killing nearly two dozen people on the island of Hispaniola, including 20 in Haiti and three in the Dominican Republic, where it knocked out power and caused intense flooding.

The deaths reportedly included a 10-year-old girl whose home was hit by a tree and a mother and young son crushed by a collapsing wall.

Laura's arrival comes just days before the Aug. 29 anniversary of Hurricane Katrina, which breached the levees in New Orleans, flattened much of the Mississippi coast, and killed as many as 1,800 people in 2005. Less than a month later, Hurricane Rita struck southwest Louisiana as a Category 3 storm.