As Hurricane Ian battered southwest Florida and turned streets into churning rivers on Wednesday, firefighters and good Samaritans jumped into action to rescue drivers trapped in the surging floodwaters.

In Naples, a city in Collier County, firefighters sloshed through waist-deep water to rescue a woman trapped inside her car.

In video shared by the Naples Fire-Rescue Department, a firefighter can be seen smashing a window in the car before leading the woman through the flooded road to safety.

"Please let this be a lesson to stay off the roads when flooding is possible," the department wrote in a post on Facebook.

LIVE UPDATES: IAN DOWNGRADED TO TROPICAL STORM, FLORIDA NOT OUT OF DANGER

Meanwhile, in nearby Bonita Springs, a city in Lee County, good Samaritans were seen on video carrying an elderly man to safety through swift floodwaters after the man became trapped inside his car. 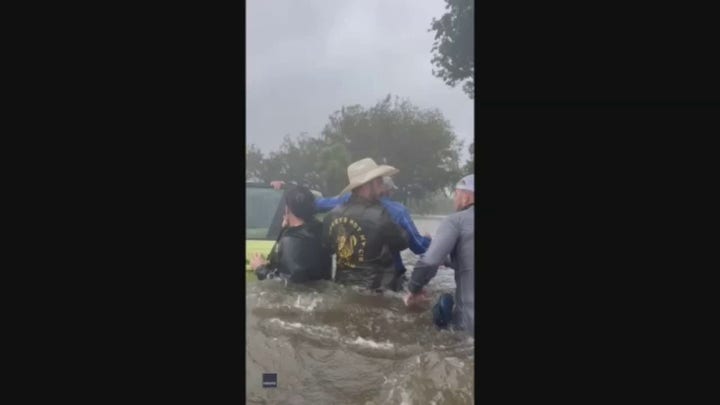 "We saw an elderly man struggling in his car, and we knew he needed help," Benny, one of the rescuers, told Storyful.

"The guys all maintained to grab the door and pry it open," he continued. "He was a bit in shock, so he didn’t want to let go, so we assured him we were there to help him. The guys carefully picked him up out of the car and brought him to shore, away from the current."

A group of Good Samaritans in Bonita Springs, Florida, carried an elderly man to safety after flooding from Hurricane Ian trapped the man inside his car on Wednesday. (@colliercountycowboys_ via Storyful)

Hurricane Ian, one of the strongest hurricanes to ever hit the U.S., has knocked out power to at least 2.5 million people and left catastrophic flooding in its wake.

WHERE IS IAN HEADED NEXT? DANGEROUS STORM'S IMPACTS WILL BE WIDESPREAD

Law enforcement officials in nearby Fort Myers received calls from people trapped in flooded homes or from worried relatives. Pleas were also posted on social media sites, some with videos showing debris-covered water sloshing toward the eaves of their homes.

Emergency crews sawed through toppled trees to reach people in flooded homes, but with no electricity and virtually no cell service, it was impossible for many people to call for help from the hardest-hit coastal areas where the surge came in.