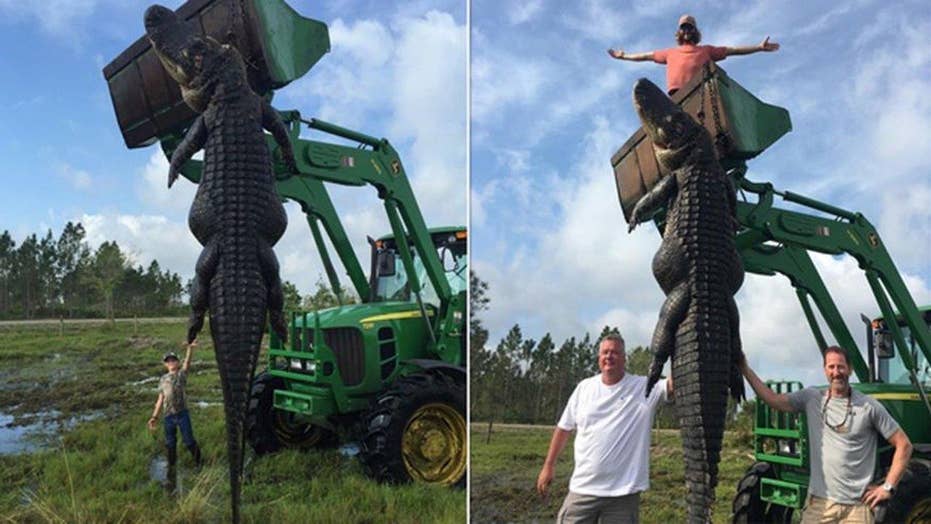 Men donating the meat to charity

A pair of Florida hunters bagged a 15-foot, 800-pound alligator Saturday and photos of the massive specimen have gone viral.

Lee Lightsey, the owner of Outwest Farms in Okeechobee, and hunting guide Blake Godwin discovered the alligator in one their cattle ponds while on a guided hunt. They believe the gator had been feasting on the farm's cattle.

"We ... discovered the remains what we determined to be cattle in the water. We determined that he was in fact attacking our livestock as they came to drink," Godwin told Fox13.

The guide said Lightsey shot the gator as it surfaced about 20 feet in front of them. Godwin said the animal was so big that the pair had to use a farm tractor to pull it out of the water.

"It is hard to believe that something this big exists in the wild," Godwin said. "Hunting is a way of life for us and we are very proud of it."

Outwest Farms has been guiding hunts for alligators, wild boar, and turkey for 18 years and Lightsey says on his website he's been hunting all his life. According to Godwin, the largest alligator they had taken before Saturday's hunt was just over 14 feet long.

The pair plan to donate the gator's meat to charity and have the alligator taxidermied for display at their hunting shows and expos.