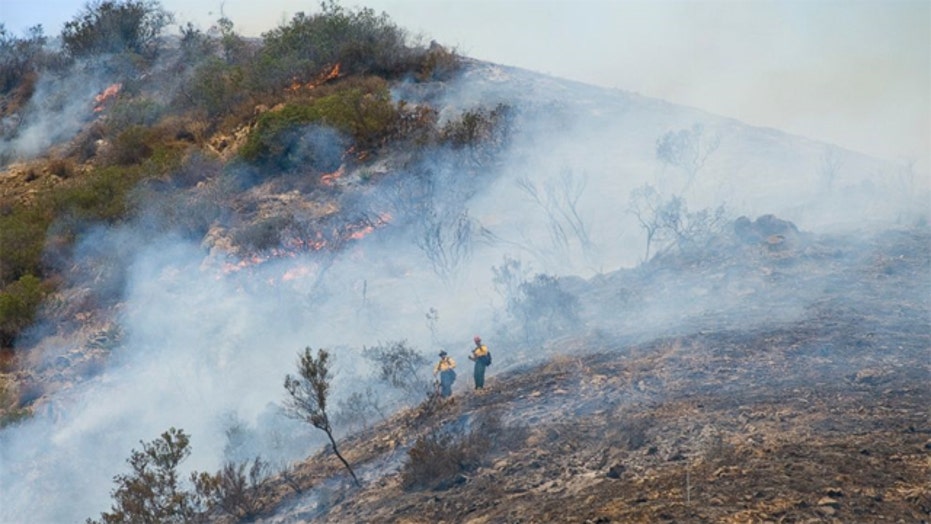 Hundreds of residents forced to flee

OAKHURST, Calif. – Two raging wildfires in California forced hundreds of people to evacuate their homes, including one near a lakeside resort town that burned nearly two dozen structures, many of them homes.

The blaze, sparked Sunday afternoon near a foothill community south of the entrance to Yosemite National Park in central California, prompted authorities to evacuate about 1,000 residents out of about 400 homes, Madera County Sheriff's spokeswoman Erica Stuart said.

The California Department of Forestry and Fire Protection said flames damaged or destroyed 21 structures. The Fresno Bee reports one neighborhood was hit especially hard, with several homes turned to ash and smoldering embers.

"This is gut-wrenching," CalFire Battalion Chief Chris Christopherson told the newspaper. "It makes you sick."

Flames were already bearing down as some people fled.

"My wife and I looked back and saw our backyard was burning," 72-year-old Joe Cunningham told the Bee. "So we didn't take much time. She drove one car, I drove the other car, and we just left."

It wasn't immediately clear exactly how many of the burned structures were homes.

The fire started off a road outside of Oakhurst, near Yosemite National Park, and made a run to Bass Lake. Stoked by winds, it quickly charred at least 320 acres, CalFire spokesman Daniel Berlant said.

The lakeside area is a popular destination throughout the year. There were no reports of the blaze, which is 20 percent contained, affecting the park.

The destructive fire led Gov. Jerry Brown to secure a grant from the Federal Emergency Management Agency to cover 75 percent of the cost of fighting the fire, state officials said.

Further north, a wildfire about 60 miles east of Sacramento forced the evacuation of 133 homes. El Dorado County sheriff's officials said residents of an additional 406 homes were being told to prepare to flee.

Berlant said the blaze started in a remote area Saturday but exploded on Sunday when it reached a canyon full of thick, dry brush. It grew by about 900 acres overnight to 3,900 acres, or a little more than 6 square miles. It was 10 percent contained.

The residents were evacuated after the fire broke out Friday. The U.S. Forest Service downgraded the fire's size from 2 1/2 square miles to 1 1/2 square miles due to better mapping of the blaze.

Six firefighters have suffered minor injuries, many of them from heat exhaustion as the region baked under triple-digit temperatures.

A heat wave was expected to last through Tuesday in Southern California, and a smoke advisory was in effect for parts of Riverside and Orange counties.