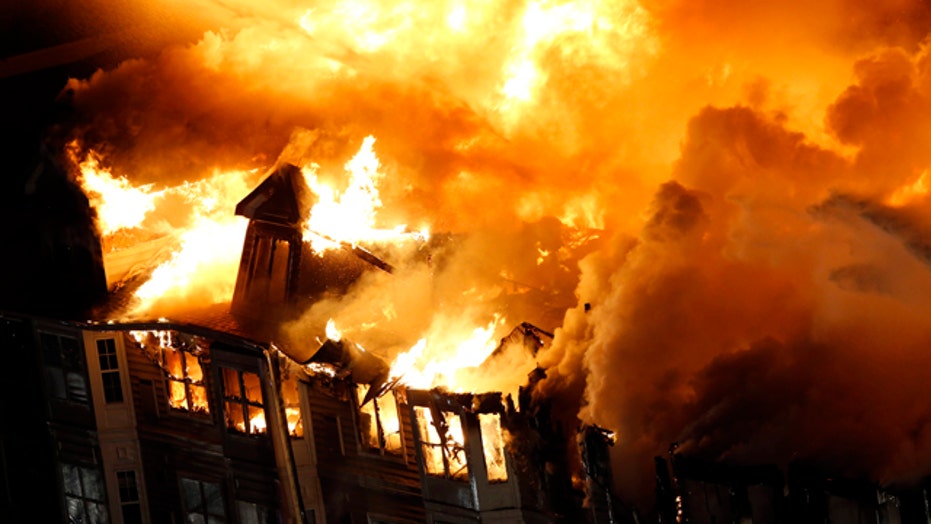 Hundreds of tenants of a New Jersey apartment complex are without a place to live after a huge fire engulfed the four-story building Wednesday.

Firefighters battling the blaze were hampered by winds and frigid temperatures while trying to extinguish the fire. Residents were ordered to evacuate and were led to a nearby school.

The fire broke out around 4:30 p.m. at The Avalon at Edgewater in the city of Edgewater, nearly 10 miles north of New York City. Flames from the complex were seen across the Hudson River in New York. There were no initial reports of injuries in the blaze. Officials said everyone was able to get out safely.

"I don't know what to expect. Now, I have nowhere to go. And I need a toothbrush," Sterling told the New York Daily News after finding a hotel room.

Officials have not determined the cause of the fire.

Late Wednesday night, Edgewater Mayor Michael McPartland declared a local state of emergency. He said school would be closed Thursday and access to roads would be restricted until further notice

Hours after the fire started, the entire building was engulfed in flames, The (Bergen) Record reported. Hamza Abdul told the newspaper he was at work when a colleague called to tell him about the fire so he rushed home.

He told the newspaper he planned to stay at a friend's house.

More than 14 years ago, a fire started at the same location where a five-story condominium complex was under construction and destroyed nine homes and damaged several others. The Aug. 30, 2000, fire forced the evacuation of dozens of nearby residents, including patients at a nearby nursing home. The cause was never determined, although investigators ruled out arson.

In a civil lawsuit, a jury found that negligence by the developer of the Avalon River Mews contributed to the 2000 blaze. AvalonBay Communities, a Virginia-based developer, was managing the construction of the $75 million complex at the site of the former Alcoa factory.