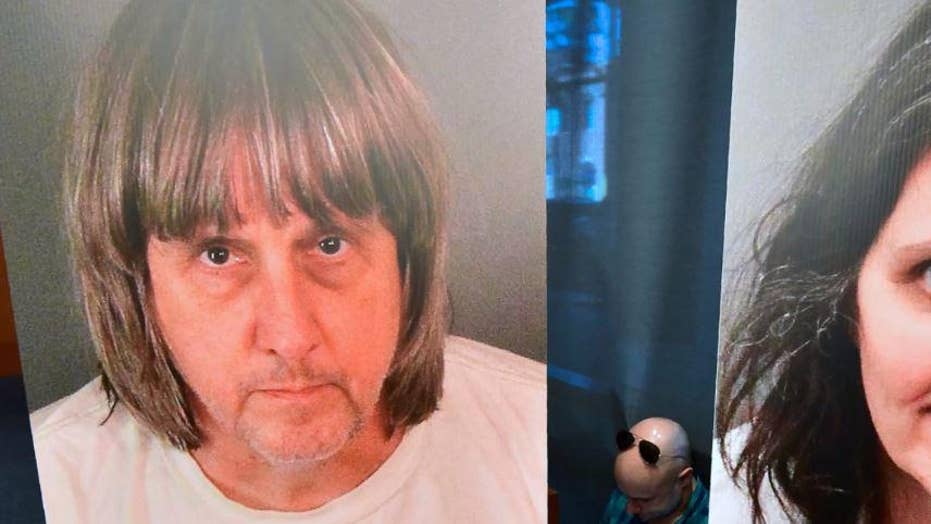 California ‘House of Horrors’ Parents David and Louise Turpin face life in prison with the possibility of parole after 25 years after pleading guilty to abuse. A chilling audio tape has been released of the 911 call made by a 17-year-old girl escaping her parents’ abuse.

The children suffered in silence, their cries and pleas unheard and their injuries unseen beyond the walls of their homes, which the adults responsible for them had turned into torture chambers.

There was the Wisconsin father recently accused of turning a blind eye while his oldest sons sexually abused the younger siblings for years; the California couple who starved and shackled 12 of their children, feeding them once a day and allowing them to shower once a year; a Michigan mother who held her children captive at home, beat them and killed two of them months apart, keeping their bodies in freezers for years.

What they and scores of other children with similar fates have in common is that their abusers kept their crimes against them secret by keeping them out of school – where bruises, wounds or other signs of mistreatment likely would have drawn someone’s attention. The abusers kept authorities at bay by claiming that their children were being homeschooled.

Homeschooling in much of the nation tends to be loosely regulated. Nearly a dozen states have no real regulatory system in place, including no requirement that parents who decide to homeschool their children even inform anyone.

Most of the roughly 2 million children estimated to be homeschooled in the United States are properly educated and cared for by their parents or guardians, experts on the subject say.

CALIFORNIA 'HOUSE OF HORRORS' PARENTS SENTENCED TO LIFE IN PRISON

But homeschooling unwittingly also provides a convenient and legal cover for families where children are living in squalor or are being neglected and abused.

The Coalition of Responsible Home Education, a national nonprofit, told Fox News that it has tracked nearly 400 cases that have drawn public attention – often through news outlets – since the year 2000. The cases tracked had children whose parents reported them as homeschooled but who were fatally abused or had survived severe abuse and neglect.

Because of the lack of oversight in much of the country, experts say, the scope of abuse and neglect among children who are listed as homeschooled is unknown.

After the 2017 death of an autistic teenager, Matthew Tirado, who suffered starvation, dehydration and injuries -- weighing 84 pounds when he died at the age of 17 -- the Connecticut Office of the Child Advocate analyzed data of families that had records of child abuse and cross-checked them with homeschool data. The agency found that more than one-third of the children who were taken out of schools purportedly to be homeschooled were from homes that had been investigated by child protection officials.

“There’s no actual accountability,” said Rachel Coleman, executive director of the Coalition for Responsible Home Education (CRHE), which advocates for homeschool reform, in an interview with Fox News. “There's no requirement to show evidence the child's being educated.”

“Most states allow you to homeschool even if you have a child abuse conviction, or repeated visits to the house because of calls” to authorities of suspected child abuse or neglect, Coleman said, “which should be red flags.”

Mitchelle Blair is led out of the courtroom by Wayne County Sheriff deputies after an outburst during a custody hearing before Wayne County Circuit Judge Edward Joseph Thursday, June 4, 2015 in Detroit. She was arrested March 24 after court deputies carrying out an eviction at her apartment found the bodies of her children, Stoni Blair, 13, and Stephen Berry, 9, in a deep freezer.  (Clarence Tabb Jr./Detroit News via AP)

Coleman pointed to the case of Mitchelle Blair, a Detroit mother who abused some of her children for years, torturing and killing two of them in 2012 and 2013 and keeping their bodies hidden in freezers until they were discovered in 2015 during an attempt to evict her. Blair was allowed to keep her children out of school for homeschooling even after Michigan Children's Protective Services investigators opened a case into abuse at the home in 2002 and 2005 and found complaints they had received "were substantiated," according to USA Today.

The same year that Blair's son, Stephen, age 9, died, a Michigan news outlet ran a story on concerns about the lack of homeschooling oversight. Jerry Jansma, a truant officer in Kalamazoo County, said: "The homeschool law is abused up and down, left and right. I despise that law, because the families I deal with use it as a loophole. You'll have a parent who is clearly neglectful and we can't get a resolution, and they'll say 'I've decided to homeschool my child,' and there's nothing I can do about it."

Coleman said to Fox News of the Blair children: “They were missing for two years. The mother said they were being homeschooled. They used ‘homeschooling’ to hide the death of the children.”

“Imagine if the Turpins had at least an annual check,” Coleman said, referring to the California parents, David and Louise Turpin, who last week were sentenced to 25 years to life in prison. “There’s no way they could have been seen by a doctor or a certified teacher and skated that long.”

CRHE calls for states to conduct periodic wellness and academic assessments to ensure that children are progressing and that any special needs are met. Many states allow parents to create their own curriculum -- without a requirement that it be evaluated and approved -- and, for those regions that do ask for some evidence of academic activity in the home, many accept a portfolio of the child's work. Even then, Coleman said, sometimes the evaluator of whether the portfolio meets basic education standards can be the parents themselves.

“We’d like to have medical records required of families who homeschool and have standardized tests or portfolios reviewed by teachers, or doctors, or counselors, social workers, or clergy, each year,” Coleman said. “Then we can notice if there’s something egregious.”

There have been numerous efforts around the country to pass laws that tighten homeschooling oversight – particularly after a fatality or revelation of years of abuse make headlines. Pennsylvania, for instance, had one of the nation's tightest homeschooling oversight policies until 2014. Homeschooling families had to register each year, prove that no adult in the home had a criminal record, and submit their lesson plans and child's work for review and approval by school district officials.

But those efforts, including Pennsylvania's, have stalled or faced outright defeat in large part because of fierce opposition by homeschooling groups, in particular the Home School Legal Defense Association, which was founded in 1983.

"States are frequently changing their child abuse and neglect regulations and we rarely oppose them, especially when they apply to everyone equally," Woodruff said. "Parents who homeschool should not be singled out for special treatment. Homeschooling is not a risk factor for abuse or neglect."

Many homeschool organizations and advocates that firmly oppose tighter oversight say that they do not want bureaucrats intruding.

“They make it sound like a rampant and excessive practice,” said Paul Rose, who is president of the Oklahoma Christian Home Educators’ Consociation, about abuse and neglect cases. “They make it sound like we should all be investigated, like we should have laws passed to allow the government to really intrude into our home and family lives under the suspicion that we’re all child abusers.”

Brian Keene, second from left, is accused of knowing his sons Josiah, 20, Elijah, 27, and James, 29 (left to right) were allegedly sexually assaulting their younger siblings and doing nothing about it.  (Milwaukee County Jail)

Those who support more oversight say that while no system is foolproof and no systems exists that could prevent all child abuse or fatalities, removing a child from school removes an important layer in identifying red flags signaling neglect or violence at home.

Sarah Eagan, a Connecticut child advocate, said that weak regulations allowed Tirado -- apparently fed up with reports to child protection investigators about her abusing her children -- to withdraw her son from school a year before he died by merely filing a notice saying she was going to homeschool him.

“The lack of regulation in Connecticut for homeschooling leaves an unclear framework for parents, districts, and, where there are concerns of abuse or neglect, for DCF to follow,” said Eagan's report on abuse and homeschool.

"This report does not seek to examine, criticize or challenge the merits of homeschooling nor is OCA challenging the right of parents to make individual choices that support the best interests and educational well-being of their children," Eagan's report said. "OCA’s investigation was solely focused on understanding the 3 processes by which children are withdrawn from school, whether there are children who are withdrawn from school who have a history of having been abused or neglected or whose family has a history of reported abuse/neglect concerns, and whether the state has a regulatory framework in place that permits a safety net for withdrawn children who may be removed from school and denied an education."

Eagan's remarks angered many homeschool families in the state.

Many groups that oppose an expansion of regulations say that to disproportionately put the focus of abuses and tragedies such as those experienced by the Tirado and Blair children on the homeschooling system ignores the failures of local and state agencies that had investigated the families and failed to take appropriate and timely action.

Pam Lucashu, the legislative liaison for The Education Association of Christian Homeschoolers of Connecticut (TEACH CT), said that an important point in the Tirado case is that the teen had been  "a public school student, known to [the state Department of Children and Families] for 12 years."

"The DCF's authority does not end at the schoolhouse door when there is probable cause to believe that abuse or neglect is occurring," Lucashu said. "DCF...tasked with removing him from a dangerous situation, failed to act...Regulation of the entire homeschooling community will not prevent abuse or neglect by those determined to commit it. It will only unfairly penalize and remove the liberty of those who legitimately homeschool."

Rose, who opposes tighter oversight, said he recognizes the tragedy of the inhumane conditions and deaths suffered by children in abusive homes.

"But they're making a big deal out of one or two families" who make the headlines, he said of homeschool-reform activists. "Homeschooling is [not] the cause, and regulating is not the way to control those families."

"We have families that fall down just like every other community," Rose said. "Mostly what I see in homeschooling are strong healthy families and well-adjusted children. We have to decide, if you have one person out of 100,000 -- sometimes the answer is you should do nothing. You can't take away the freedom of millions for one person" who abused the system.

Coleman responds that, as she sees it, there is no real choice.

"When homeschoolers think of oversight, they think about it in terms of their families. They say 'I know my kids are fine, I don’t have to do that oversight thing,'" Coleman said. "I say you may know your kids are fine, but you don’t know that the other kids are fine. They just don't consider that better oversight could be a lifesaver for a child."