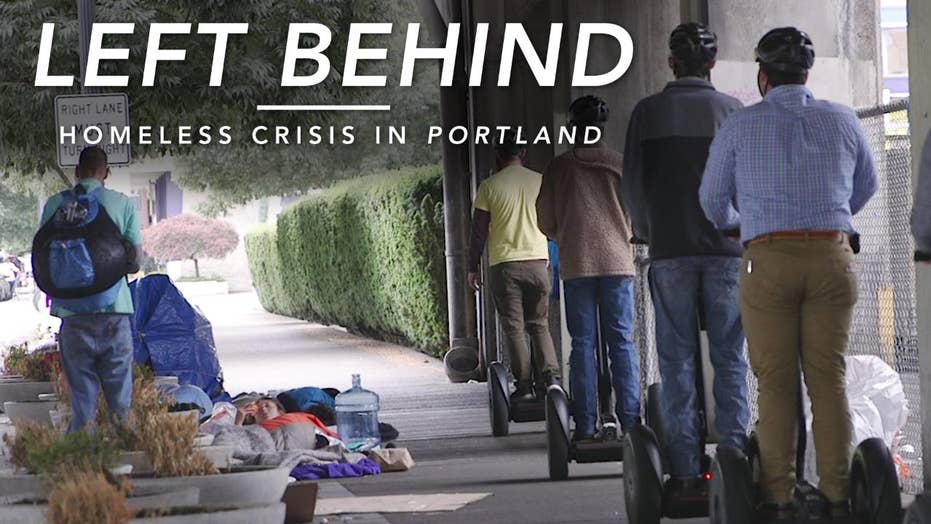 In the summer of 2019, Fox News embarked on an ambitious project to chronicle the toll progressive policies has had on the homeless crisis in four west coast cities: Seattle, San Francisco, Los Angeles and Portland, Ore.

A homeless woman who was sleeping in front of a garage at an apartment complex in Oregon's largest city died on Friday after she was accidentally run over by a driver, according to police.

The Portland Police Bureau said in a news release the incident happened around 6:25 a.m. at an apartment building in the 2700 block of Southeast 92nd Avenue when officers were called to a report of a vehicle running over a person in a driveway.

Police said that Stinson was homeless and had laid down to sleep in front of the garage door of the apartment building.

The driver of the car told officers that his car had been backed into the garage and that when he came out of his car to go to work he pulled forward out of the garage and "felt a bump."

On any given night, thousands of people can be found sleeping on the streets of Portland. (Fox News)

"He stopped but did not see what he had struck. He continued (to) pull out and felt another bump," police said. "That's when he realized that he had run over someone. He immediately called 911 for help."

Stinson was transported to an area hospital with injuries that were not believed to be life-threatening, but later that morning police said officers learned Stinson's condition had "taken a turn for the worse." The 47-year-old died "a short time later" at the hospital from her injuries.

Portland police said that at this time, no charges or citations have been issued. The PPB's Traffic Division's Major Crash Team is now investigating the incident.

Portland, with a metropolitan area of about 2.4 million people, has joined West Coast cities such as Los Angeles and San Francisco in struggling with a growing homeless crisis that ranks among the worst in the country.

The Ninth Circuit Court of Appeals allows the homeless to sleep in public spaces when shelters are full; Dan Springer reports from Seattle.

Safety resource website Security.org released a study in October that showed Oregon has the fourth-highest number of homeless people in the nation when adjusted for population. The study found Oregon has about 350 homeless people per 100,000 people, nearly double the national average of 168 per 100,000.  The study also found that Oregon's homeless rate has increased by nearly 14.10 percent since 2014.