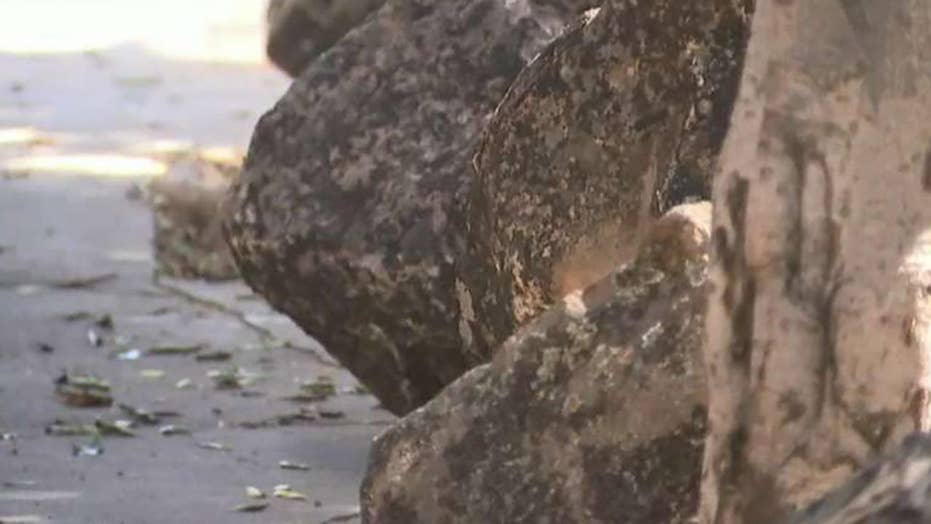 Homeless advocates say the sidewalk rocks are a cruel response; neighbors say the boulders have helped.

A residential side street in San Francisco now resembles a scene out of the rocky West after a group of neighbors banded together to place about two dozen boulders along the sidewalk to try and deter homeless people from camping out amid the city's ongoing crisis.

Neighbors along Clinton Park in the city's Mission Dolores neighborhood said the rocks are meant to keep drug users from having a space to shoot up as they camp out overnight.

"They'll shoot up and stay overnight," neighbor David Smith-Tan told KTVU. "A bunch of my neighbors, we all chipped in a few hundred dollars and I guess this is what they came up with."

San Francisco has long struggled with problems of human waste and needles on the streets of the Tenderloin district, where many addicts and homeless people are typically found. The city has set up public toilets and last year announced the creation of a special six-person "poop patrol" team to clean up the human waste.

Similar landscaping measures have been implemented in other parts of the city. The California Department of Transportation has put rocks in an open space off Bayshore Boulevard to deter encampments, while the Eureka Valley-Harvey Milk Branch of the San Francisco Public Library – in the same neighborhood – has made design choices that are perceived as anti-homeless, according to KTVU.

A group of neighbors in San Francisco has had two dozen boulders placed along a residential road to deter people from camping out. (KTVU)

While the city's homelessness crisis has centered mostly around the Tenderloin district, other neighborhoods across San Francisco have also seen an alarming increase of homeless people in recent years.

Earlier this year, a preliminary count showed a 17 percent increase in the homeless population in the city from 2017. However, in that count San Francisco opted to use the federal definition of homelessness. If it had used the same measurement it has in years past, the numbers would show an increase from 7,400 to 9,784 – or 30 percent – in 2019.

About a month ago, out of frustration of city officials not doing enough, neighbors along Clinton Park decided to address the sidewalk problem.

"Since the rocks, it has helped," neighbor Ernesto Jerez told KTVU. "It's something. We've got to do something. I feel like there is nothing being done."

But homeless advocates call the boulders a cruel response and not a solution to the massive problem.

"There's actually a name for it. It's called anti-homeless architecture," Jennifer Friedenbach, executive director of the Coalition On Homelessness, told KTVU.

A San Francisco Public Works department spokeswoman told KTVU the city had no part in putting the boulders here, and since they aren't blocking the sidewalk, there are no plans to remove them.

San Francisco's homelessness crisis prompted President Trump to threaten last week to slap the city with Environmental Protection Agency violation notices, for allowing a tremendous amount of waste, including needles, to go through storm drains into the ocean.

In a statement, Mayor London Breed called Trump's remarks "ridiculous" and said storm drain debris is filtered out at city wastewater treatment plants so that none flows "into the bay or ocean."

Some San Francisco officials claim tech companies are causing housing prices to soar, forcing those who can't afford it out on the street; reaction from Kennedy, host of 'Kennedy' on Fox Business Network.

Breed added that the city is fighting homelessness by adding 1,000 beds to shelters and wants to pass a $600 million bond to build affordable housing and increase services for people with addiction and mental illness.

Homeless advocates on Monday said the immediate problem is that they are currently dealing with a lack of shelters.

"We have 1,200 people on the wait list for shelter. That's for tonight," Friedenbach told KTVU. "People have nowhere to go."