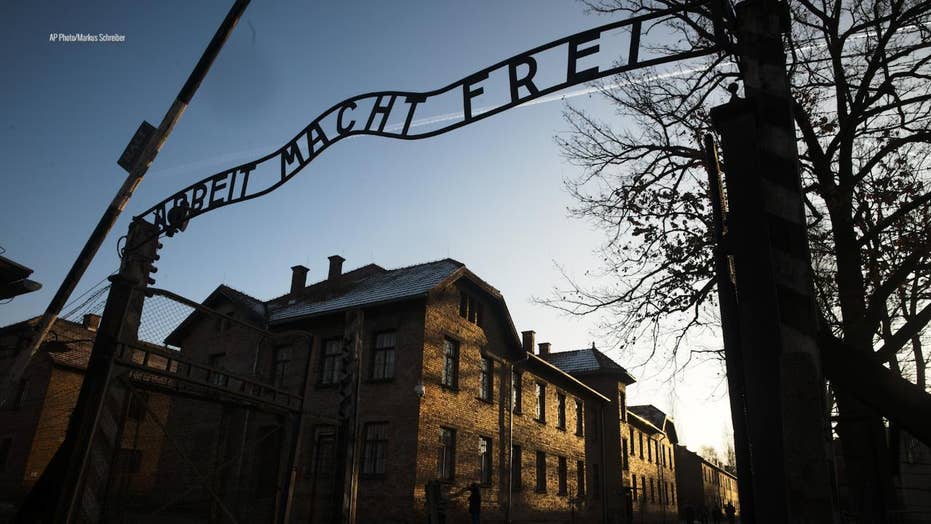 Struggling to contain the tears at times, Irene Buchman recalled the last time she saw her parents and brothers – at Auschwitz-Birkenau, the infamous Nazi death camp.

“It’s hard to describe everything in detail because it’s heartbreaking for me, what they did to my parents and what they did to all of us,” the petite 95-year-old New Jersey woman told Fox News.

Buchman, who is Jewish, was born in Bilke, Czechoslovakia, now part of Ukraine. She was a teenager when the Nazis invaded and forever changed her life.

“It was a normal family life – my father and my mother, nice decent people,” she said, decades of grief still evident in her raspy voice. “And so were the Jewish people.”

When the Nazis began segregating Jews from the general population, Buchman and her family were taken to the Beregovo ghetto in German-occupied Ukraine.

“We were told to pack our belongings as much as we can and go to Beregovo,” Buchman recalled. “We were there six weeks waiting until we were taken to [Auschwitz].”

Her father and two brothers were immediately separated from the family while Buchman, her younger sister Olga and their mother were sent to the barracks. They were forced to remove their clothes. Their hair was cut. They were given striped uniforms.

A group of child survivors behind a barbed-wire fence at the Nazi concentration camp at Auschwitz-Birkenau, on the day of the camp’s liberation by the Red Army, 27th January 1945. The photo was taken by Red Army photographer Captain Alexander Vorontsov.

“One brother was kept to work and one (the youngest) went with my father to be burned to ashes,” she recalled, her face flushed with emotion. She didn’t see her father and brothers again.

In the barracks, Buchman said they were forced to sleep in a group of at least 13 girls on an elevated wooden platform, with nothing but a thin sheet. They were fed watery soup and stale bread.

Two weeks into their detention, the female inmates were lined up outside the barracks for a selection by the SS – or Schutzstaffel, Adolf Hitler’s brutal paramilitary force.  Buchman's mother – who was about 40 years old at the time – was placed into a separate line.

Buchman recalled a woman urgently telling her she needed to get her mother out of that line. Despite the dire warning, Irene's mother, who was with her sister-in-law, decided to follow the orders.

She told Buchman to protect her younger sister Olga.  It was a promise the daughter was determined to keep – and did.

“She said ‘Take care of Olga.’ Until this day, I take care of her,” Buchman said.

The main entrance at the former Nazi death camp of Auschwitz in Oswiecim, Poland, with the inscription, 'Arbeit Macht Frei', which translates into English as '"Work will set you Free." (AP Photo/Markus Schreiber)

Several weeks after Buchman's mother was killed, the Jewish prisoners were again forced to march in a single file line in front of SS soldiers and Dr. Josef Mengele, known as the "Angel of Death."

Olga was selected to stand inside a tight circle of kapo women – prisoners assigned by the SS guards to supervise forced labor or carry out administrative tasks.

Buchman was told to return to the barracks, but something about the way the kapos locked arms made her fear the worst.

A view inside a prisoner barracks in the former Nazi death camp of Auschwitz Birkenau or Auschwitz II in Oswiecim, Poland. (AP Photo/Markus Schreiber)

“I broke the ring and I took out my sister,” Buchman recalled. “Then we ran to the barracks, and we were knocking on the door, and some people didn’t want to let us in. (An SS guard) was scratching my neck, but I had cousins there and they opened the door.

“I saved my sister,” she said.

Some short time later, Buchman and her sister were transferred to a slave labor camp where they worked at a munitions factory.

In fall 1944, as the Russian army was fighting its way west through German-occupied Poland, Heinrich Himmler, the main architect of the Holocaust, ordered the SS to destroy the evidence of the atrocities by destroying the gas chambers and crematoria in Auschwitz.

On Jan. 27, 1945, the Soviet Red Army liberated the Auschwitz death camp in German-occupied Poland. Auschwitz was the largest of the Germans' extermination and death camps and has become a symbol of the terror of the Holocaust. (AP Photo/Markus Schreiber)

By mid-January 1945, as Germany faced certain defeat, thousands of Auschwitz prisoners were evacuated on foot in death marches.  Fewer than 9,000 remained in the camp, deemed too sick to move.

On Jan. 27, 1945, the Red Army arrived in Auschwitz and found thousands of sick and starving survivors. They also found the piles of bodies.  The camp had been the site of 1.1 million murders.

RESCUED BY THE BRITS

It wouldn’t be until April 1945 that the sisters were rescued by the British.

Holocaust survivors stand behind a barbed-wire fence after the liberation of Nazi German death camp Auschwitz-Birkenau in 1945 in Nazi-occupied Poland, in this handout picture obtained by Reuters on January 19, 2020. Courtesy of Yad Vashem Archives/Handout via REUTERS

They had been taken by train to Lubeck – a town in northern Germany off the coast of the Baltic Sea. There, the SS debated their fate.

When the British bombed the train tracks, the sisters - and the rest of the prisoners - made their escape. They were found days later by British soldiers.

HOLOCAUST SURVIVOR, 104, HAS 'EMOTIONAL' BIRTHDAY CELEBRATION AT THE WESTERN WALL WITH 400 DESCENDENTS

Buchman and her sister remained in Lubeck for several weeks while they recuperated. Eventually, they went to Budapest, Hungary, where they had an uncle who had survived the war.

They later began living at a displaced person camp, where they applied to come to the United States as refugees.

In 1949, they arrived in America. After a brief stint in Atlanta learning English, the survivors settled in New York City.  Buchman got a job as a seamstress and eventually earned a degree from the Fashion Institute of Technology.

Irene Buchman and her sister Olga Berkowitz Jaeger soon after they were liberated. (Courtsey Carol Buchman-Krutiansky)

In 1958, Irene met Manny Buchman, also a Holocaust survivor, while on a blind date in Israel. They married soon afterward and began living in New York. They had two daughters, Carol Buchman-Krutiansky and Diane Strobel.

Though it remains painful to recount, Buchman said it's important for her – and other Holocaust survivors – to share their stories so that younger generations learn what happened to millions of European Jews at the hands of the Nazis.

A memorial rose is left on the electric fence of the Auschwitz II-Birkenau extermination camp. (Photo by Christopher Furlong/Getty Images)

“People should know what (inhumanity) existed in that era. Jews were persecuted and were put to death,” she said. “I don’t know how the world allowed Hitler to do what he created. It was very, very inhuman and the world was standing (by) and didn’t say a word, which was shameful and unacceptable.

“Until this day, I can never forget it," she said. "My parents had to die innocently just because Hitler wanted to kill all the Jews."