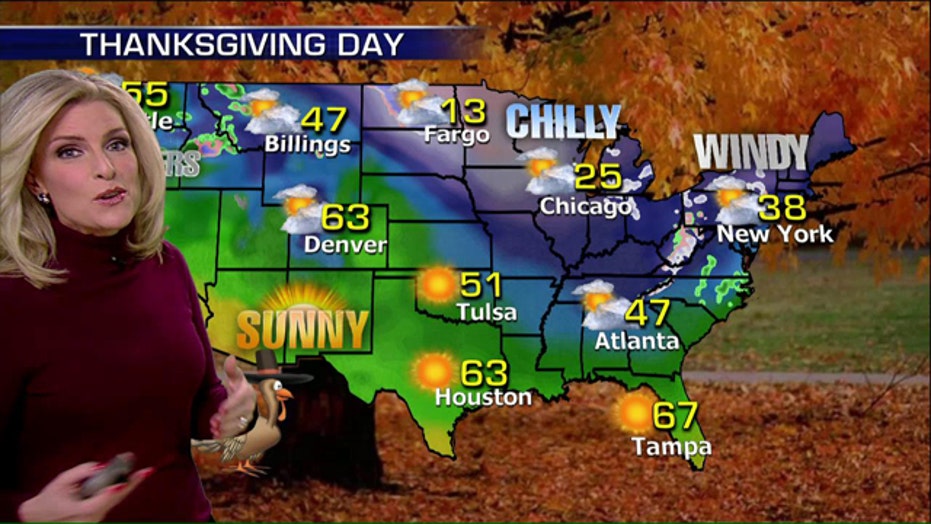 Wintry mix ahead of holiday

Just in time for the busiest travel day of the year, a sloppy salvo of rain and snow slammed into the Northeast on Wednesday as millions of Americans began the big Thanksgiving getaway, grounding hundreds of flights and turning highways hazardous along the congested Washington-to-Boston corridor.

By early evening, more than 700 flights had been canceled, the bulk of them in the Northeast, during what is typically one of the busiest travel periods of the year. Thousands of flight delays were also expected as the snow from the nor'easter piled up.

Some travelers tried to change their plans and catch earlier flights to beat the storm, and major airlines waived their re-booking fees. But most planes were already filled.

Numerous traffic accidents were reported across the Northeast, where by midafternoon the line between rain and snow ran roughly along Interstate 95, the chief route between Washington and Boston.

Pat Green and her husband drove from Saugerties, New York, to the Albany airport for the first leg of their trip to San Francisco. She said the drive on the New York State Thruway was "a little hairy," but they made it, and their flight was on schedule so far.

"It was snowing so hard you couldn't see the car ahead of you," she said. "We slowed down so we were fine. We also give ourselves a lot of extra time."

Major Northeast cities were likely to see moderate to heavy rain most of the day, though New York could see 1 to 4 inches of snow, and its northern suburbs 6 to 8 inches, the National Weather Service said. Higher elevations west of the I-95 corridor could see as much as 6 to 12 inches.

Dan Albert hoped to beat the snow as he, his wife and 15-year-old daughter refueled their SUV Wednesday morning along I-81 in Hagerstown, Maryland, about halfway between their Greensboro, North Carolina, home and their Thanksgiving destination in Mahwah, New Jersey.

"Traffic was fine last night, no problems at all, but today's going to be a real booger," Albert said. But he added: "Got to see the folks. We only get to see them once a year. Got to muscle through it, right?"

At a rest stop on the New Jersey Turnpike, tired families grabbed large cups of coffee and breakfasts of pizza and fried chicken before heading back to the slushy road.

Abdullah Masud, a lawyer who lives in Kuwait, was heading from Boston to Washington with a cousin.

"We were originally planning on leaving Wednesday morning, but when we heard about the snowstorm we changed our mind and left Tuesday night. But I don't think it made that much of a difference," he said, noting the heavy traffic.

By early afternoon, airlines had canceled more than 10 percent of their flights at Philadelphia, Newark Liberty and LaGuardia airports.

The wintry weather was not confined to the Northeast. An Alberta clipper left many highways in North and South Dakota slick, and a winter storm warning was issued for parts of Minnesota.

An estimated 41.3 million travelers are expected to hit the nation's highways between Wednesday and Sunday, a 4.3 percent increase over last year, according to AAA.