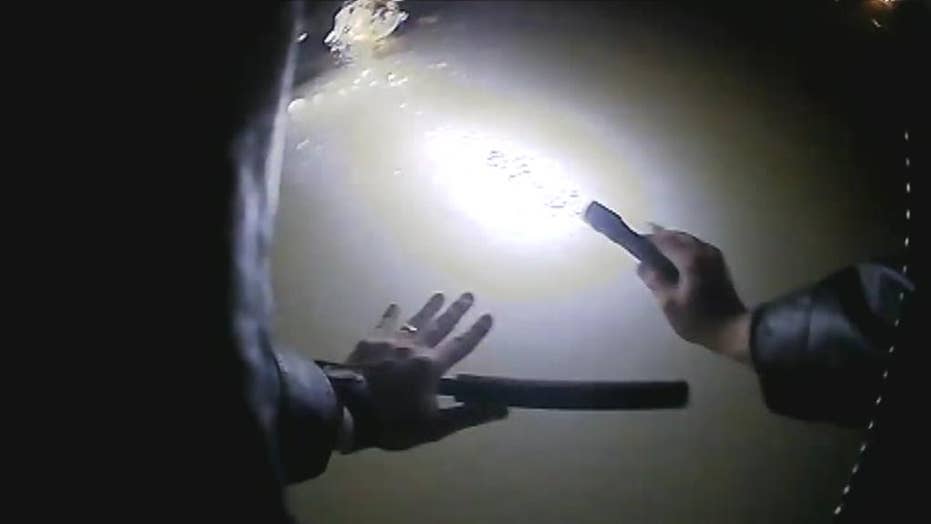 A brave police officer risked his life responding to reports of a stranded dog in the frozen Erie Canal.

Sgt. Travis Gray of the Ogden, New York, police inched out to where the dog was trapped in the ice and rescued the imperiled animal, pulling it to safety.

"I walked up on the canal path that runs along it and could see the dog down in the water. I called for the fire department but could tell this dog didn't have too much left in it, so I decided to see if I could grab it," said Gray.

He had his body camera turned on and recorded the harrowing experience showing the Shepherd-Rottweiler mix up to its neck in frigid waters. Animal control officials told Fox News that the dog was presumably in the choppy waters for about 15-20 minutes before Gray responded.

Gray told Fox News the dog could have been in the waters even longer saying, "It had broken at least 100 yards of ice to try and get out."

Hunching down on hands and knees in the darkness, Gray used a flashlight to locate the pooch and crawled out to him on the fragile ice. The entire harrowing rescue, which took place about 2 a.m. on Monday, lasted less than two minutes.

The pet could be heard wheezing and groaning in the video, as Gray said reassuringly, “Hold on buddy, hold on.”

Describing the dog's condition, Gray expressed his worry about the pup: "The way it was howling, it's ears were covered in ice. I just decided to do it, I couldn't wait."

The risky retrieval was shared on the police department’s social media pages.

Ogden Animal Control Officer John Eeckhout told Fox News, "EMTs were treating the dog, wrapped it up in multiple blankets. It's doing very well, but was very cold and weak when pulled out of the water, lethargic, like a big iceball."

A neighbor called 911 after hearing the dog’s cries.

Local fire and EMS officials took the dog in their care, treating it for hypothermia. The pup was taken to Ogden Animal Control and reunited with its owners the following day, after they left a voicemail with the pound reporting it missing.