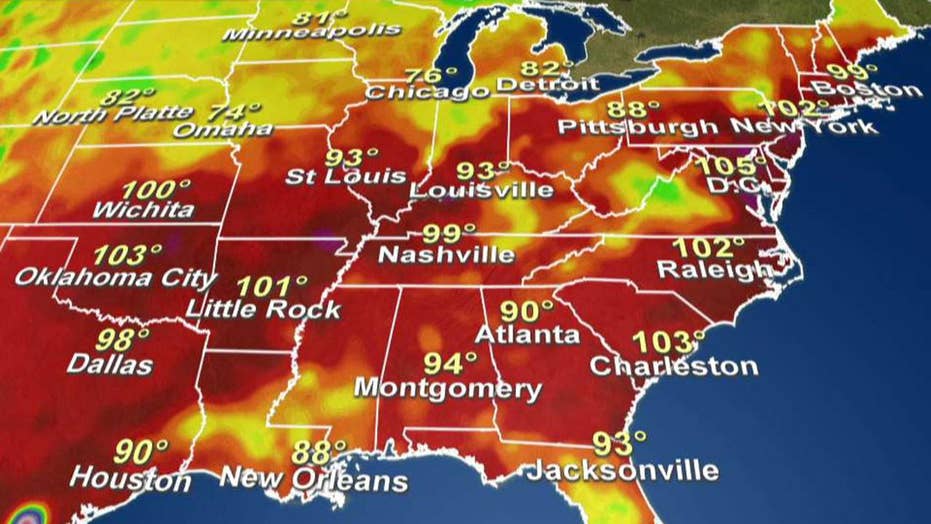 As the heat wave gripped much of the country on Sunday, power outages reported in multiple states left hundreds of thousands of customers in the dark.

Crews were working to restore power after heavy storms over two days knocked out power for more than 800,000 Michigan homes and businesses.

Two utilities said it could take until Wednesday to restore power for everyone.

Detroit-based DTE Energy said Sunday afternoon that roughly 600,000 customers were affected because of storms in southeast Michigan Friday and Saturday.

Officials said it's the largest storm to hit the region in years.

Their estimate on outages grew throughout the day as crews worked. The weather downed more than 2,000 lines.

The utility said it had restored power to 250,000 customers and was expected to restore all power by Wednesday.

Jackson-based Consumers Energy said roughly 220,000 customers overall were affected. The utility said it hoped to restore power to everyone by Tuesday.

The utility said the storms downed more than 2,600 wires.

Finnegan playing at the dog beach at Quiet Waters Park in Annapolis, Md., on Saturday. The National Weather Service said "a dangerous heat wave" was expected to break record highs in some places, particularly for nighttime. (AP Photo/Susan Walsh)

From the Carolinas to Maine, daytime highs reached the upper 90s Sunday. Coupled with high humidity, temperatures felt as hot as 110 degrees Fahrenheit in places.

“Sunday has been canceled,” the NYPD jokingly tweeted. “Stay indoors, nothing to see here. Really, we got this.”

In New York City, where all eyes were on the power grid even before the hot weather following a Manhattan blackout last weekend, electricity company Con Ed reported roughly 12,000 scattered outages early Sunday evening, the vast majority in the boroughs of Brooklyn and Queens.

Inmates across the city were affected by these power outages: 3,700 inmates were without power at Brooklyn Detention Complex, and Otis Bantum Correctional Center on Rikers Island.

Con Ed asked customers in certain neighborhoods in southeast Brooklyn “to conserve energy while company crews work to repair equipment problems.” The utility also said it reduced voltage by 8 percent in those areas to maintain service as repairs were made.

The city also directed office buildings to set thermostats no lower than 78 degrees through Sunday to reduce strain on its electrical grid. A day earlier, a commemoration of the 1969 moon landing planned for Times Square and an outdoor festival featuring soccer star Megan Rapinoe and musician John Legend were nixed because of the heat.

Fox News’ Jacqui Heinrich and The Associated Press contributed to this report.