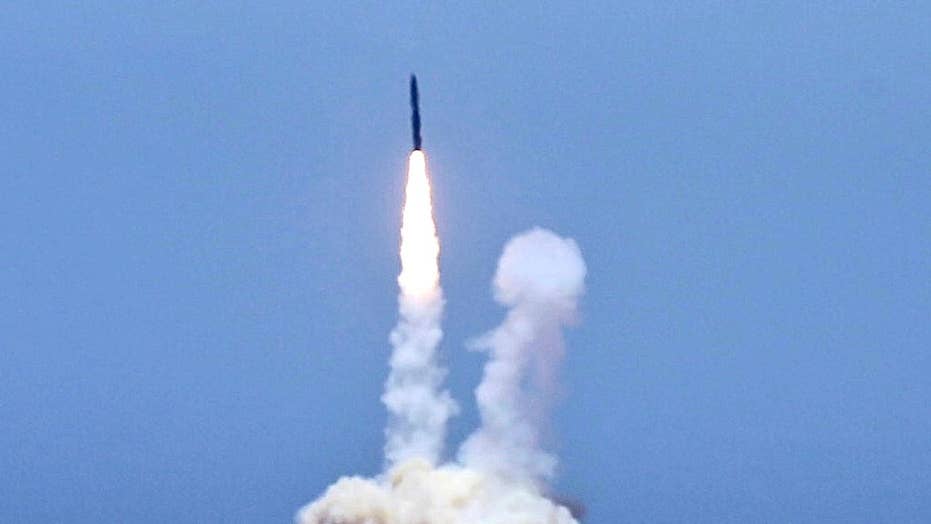 Pentagon hopes to build on success of missile defense test

An odd-looking, colossal contraption located near Pearl Harbor has been generating praise ever since it successfully intercepted a test-fired missile, and helped demonstrate the U.S. can handle whatever North Korea tries to send its way.

In the days since America's Missile Defense Agency (MDA) took out the missile fired at the West Coast from a Pacific Ocean island, people outside of Oahu are getting a peek at what looks like a giant white golf ball atop a football field-sized nine-story oil rig platform near Pearl Harbor. Officially called the Sea-based X-band radar, or SBX, the $2.2 billion, 50,000-ton radar is a key part of the nation’s defense against North Korea - or any other hostile nation with an intercontinental ballistic missile.

Though the radar system has been criticized in media reports for being costly and ineffective, it performed flawlessly during the May 30 live missile test, the first test of its kind, during which the MDA’s ground-based defense system successfully intercepted an ICBM.

“SBX performed exactly as designed during this test,” said Chris Johnson, the MDA’s director of public affairs. “The radar identified the target missile, developed a projected track, discriminated lethal from nonlethal objects, and provided that data to the command and control system, which is exactly how it would perform during an actual scenario.”

The SBX, a key component of missile defense in the Pacific region, hasn’t always garnered so much praise.

The multibillion dollar project was deemed a “flop” by the LA Times in a 2015 special report.

“Although it can powerfully magnify distant objects, its field of vision is so narrow that it would be of little use against what experts consider the likeliest attack: a stream of missiles interspersed with decoys,” the LA Times report claimed.

The LA Times said the project “not only wasted taxpayer money, but left a hole in the nation’s defenses.”

While not addressing the specific criticisms, Johnson said a number of improvements have been made to SBX.

“Since 2015, the platform itself has received hull, mechanical and electrical modifications to extend its service life -- like any other ship -- and SBX is available to support a wide range of operations,” Johnson said.

The LA Times also claimed the SBX spends most of its time “mothballed” in Pearl Harbor.

While Johnson said his agency does not comment on the SBX’s deployment schedule, U.S. Rep. Mike Rogers, R-Ala., chairman of the House Subcommittee on Strategic Forces and senior member of the House Armed Services Committee, said the SBX is in high demand by the U.S. military and is particularly important to defend Hawaii, which could be hit within 20 minutes of a North Korean missile launch.

“There is no serious argument that we don’t need SBX to assist in the ballistic missile defense of Hawaii,” Rogers said.

While the SBX has some drawbacks, mainly operational costs and vulnerability to attack, said Michaela Dodge, a policy analyst for defense and strategic policy at the Heritage Foundation’s Allison Center for Foreign Policy Studies, the radar “is an incredible capability” that gives the U.S. defensive flexibility.

“The sea-based SBX serves an important mission, providing U.S. interceptors more granular data than available from some other types of sensors we use,” said Dodge, who specializes in missile defense, nuclear weapons modernization and arms control. “It also has a signaling value both for deterrence of adversaries and assurance of allies.”

Constructed on a self-propelled, ocean-going, semi-submersible platform with two hulls, the vessel is stable in high winds and turbulent sea conditions, the MDA said.

Developed by Raytheon in partnership with Boeing, the SBX also has been extensively tested in sea trials in the Gulf of Mexico and the Pacific Ocean.

“The radar’s ability to be positioned wherever it is most needed to support missile defense testing and defensive operations has proven to be an excellent capability, and it will provide a highly capable sensor for target tracking and discrimination for many years to come,” Johnson said.

During the successful May 30 test, Johnson said an ICBM was launched from an atoll in the Marshall Islands, while a ground-based interceptor was sent from Vandenberg Air Force Base in California to intercept and destroy the target “in a direct collision.”

"This system is vitally important to the defense of our homeland, and this test demonstrates that we have a capable, credible deterrent against a very real threat,” MDA Director Vice Adm. Jim Syring said in a statement. “I am incredibly proud of the warfighters who executed this test and who operate this system every day."