Lava flow from Hawaii's Kilauea volcano has crossed onto the property of a geothermal plant, raising concerns that wells at the plant could be ruptured.

A new lava flow spewing from a fissure caused by Hawaii’s Kilauea volcano crossed onto the geothermal plant property and continued its slow advance as officials worry that the molten rock could block more escape routes, trapping residents in several nearby neighborhoods on the Big Island.

Lava flow from fissure 21 crossed onto the Puna Geothermal Venture, known as PGV, and continued advancing east on the property, USGS reported. The flow continued its “slow advance eastward” early Sunday morning, but “has not moved significantly closed to Kapoho Road.”

Residents have been concerned about the lava rupturing wells at the plant, causing deadly hydrogen sulfide and other gases to be emitted, Reuters reported. Authorities already shut down the plant and removed 60,000 gallons of flammable liquid at the start of the volcanic activity. The wells were also deactivated.

At least 82 structures, including dozens of homes, have been destroyed since the volcano began erupting three weeks ago. About 2,000 people have fled their homes as lava encroached on neighborhoods.

Kilauea volcano has been erupting for about three weeks. (Reuters)

Authorities are concerned about lava cutting off escape routes on the Big Island. Highway 137 was shut down after lava flows crossed the road and entered the ocean, creating a deadly plume of gas called laze. Highway 130 is now the only way in and out of towns such as Kalapana, Kaimu, Kehena and Opihikao, Hawaii News Now reported.

The highway, however, also poses a risk of shutting down. Officials covered the road with heat-resistant plates after large cracks began appearing.

"Even though the steel plates have slightly heated in the areas of Highway 130, the steel plates are heat resistant and are still safe," Tim Sakahara, spokesman for Hawaii Transportation Department, said. "No problems have been reported or associated with the plates." 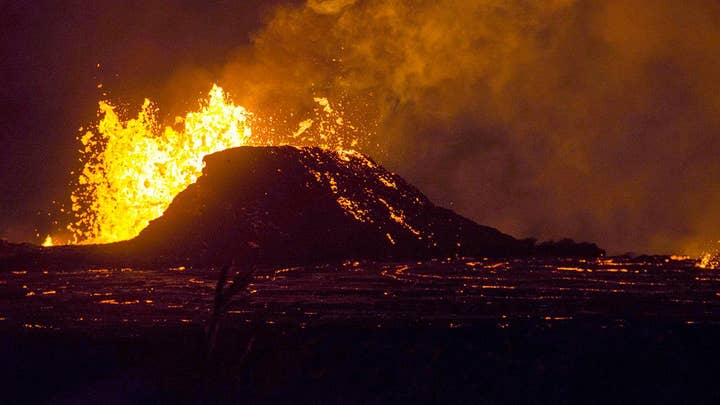 If the lava flows cut off the highways, officials may resort to air evacuations to get residents trapped in the area out.

"Our tasking is essentially to take 400 people within four hours from the furthest most LZ [landing zone] south up to Hilo to be evacuated," Marine Maj. David Bachta said.