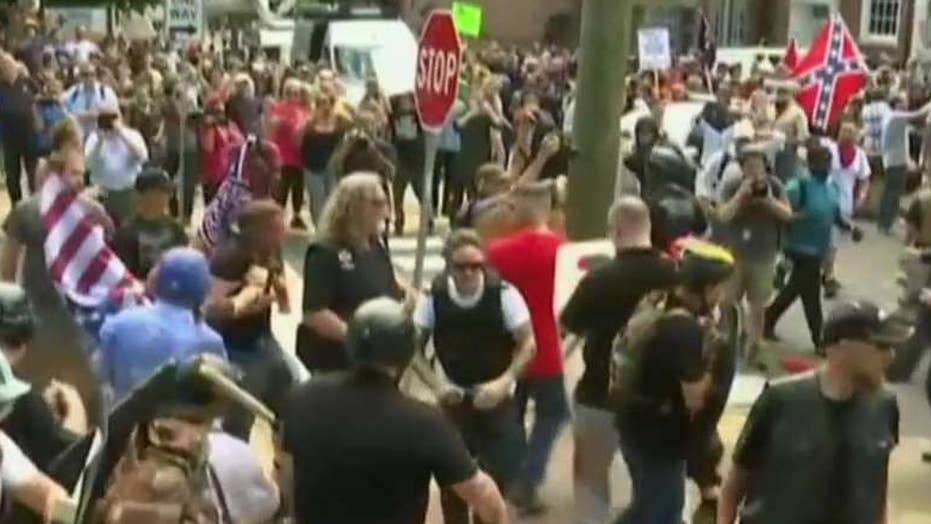 Just two days after a white nationalist rally in Virginia turned deadly, a 17-year-old vandal in Boston allegedly hurled a rock through one of the panels at the New England Holocaust Memorial – shattering the glass and raising concerns of more violent hate crimes in the wake of the chaos in Charlottesville.

Both officials in Boston and civil rights advocates said that an investigation needs to be completed, but this is the second time this summer that a glass panel at the memorial has been vandalized and comes as minority groups are reporting a sharp uptick in hate crimes across the country.

The Anti-Defamation League noted that anti-Semitic incidents in the U.S. jumped 86 percent in the first quarter of 2017 compared to same period last year. Other minority groups, from the Latinos and Asians to Muslims and the LGBT community, have also reported a spike in hate crimes directed at them over the last year and a half.

“The threat is not over,” Jonathan A. Greenblatt, the CEO of the Anti-Defamation League said in a statement. “The hate groups are feeling emboldened and are already organizing a number of other rallies.”

While the reasons that hate crimes are on the rise is debatable, what is not is that white nationalist and white supremacist groups have recently become more encouraged and more public in their views.

“They are in a stronger position than they have been in decades,” Steven Hahn, a Pulitzer Prize winning historian at New York University, told Fox News. “The feel energized by Charlottesville and by the presidential election last year. I think we are in for an extended period of incidents like we saw in Virginia.”

Hahn noted that while endemic racism and hate crimes are nothing new in the United States, the growth in far right groups like Vanguard America, Identity Evropa and the League of the South really started to pick up steam following the election of Barack Obama in 2008.

Obama’s presidency paired with the emergence the “Black Lives Matter” movement, the increasing diversification of the country and a decline in blue collar careers left some white Americans feeling marginalized and became prime fodder for the white nationalist movement, he said. The number of hate groups as designated by the Southern Poverty Law Center topped 1,000 for the first time ever in 2011 and while that number of groups dropped to 912 last year that likely understates the growing level of white nationalists in the country.

“It’s like in the 1920s with the Ku Klux Klan,” Hahn said. “What was striking was not that number of KKK members but the number of people who were allies of the group. Today the number of white nationalists don’t actually reveal the range of people who also sympathize with them.”

Experts and civil rights advocates contend that the campaign and subsequent election of Donald Trump only further vitalized these groups as the president’s call for stricter immigration controls and a ban on Muslim’s entering the country resonated with white nationalists.

Corey Saylor, the director of the department to monitor and combat Islamophobia at CAIR, said that while the U.S. Muslim community saw spikes in hate crimes following the terror attacks in Paris and San Bernardino, his organization has noticed an unprecedented spike in incidents since the start of 2017. CAIR recently reported a 91 percent jump in hate crimes directed at Muslims for the second quarter of 2017 compared to the same period in 2016.

“In the time we have taken statistics, this is largest jump we have ever seen,” Saylor said. “Trump creates an atmosphere of anger and people feel emboldened to go out to commit these crimes without repercussions.”

Trump did condemn white supremacist groups – declaring “racism is evil” – but only after two days of public equivocation and internal White House debate that infuriated many citizens and lawmakers on both sides of the aisle.

The heads of the black, Hispanic, Asian and progressive caucuses are calling in a letter for the firings of White House staff aides Steve Bannon, Stephen Miller and Sebastian Gorka. The letter asserts their continuing presence in the White House is emboldening a resurgent white supremacist movement in America.

Despite the widespread condemnation of white nationalist groups, however, experts contend that their influence and the subsequent hate crimes will never disappear in the U.S.

“At this particular moment in the U.S., the white nationalist right see the green light and see the election in 2016 as a sign that they are on the rise,” Hahn said. “People who think this is going to fade away have no sense of American history.”