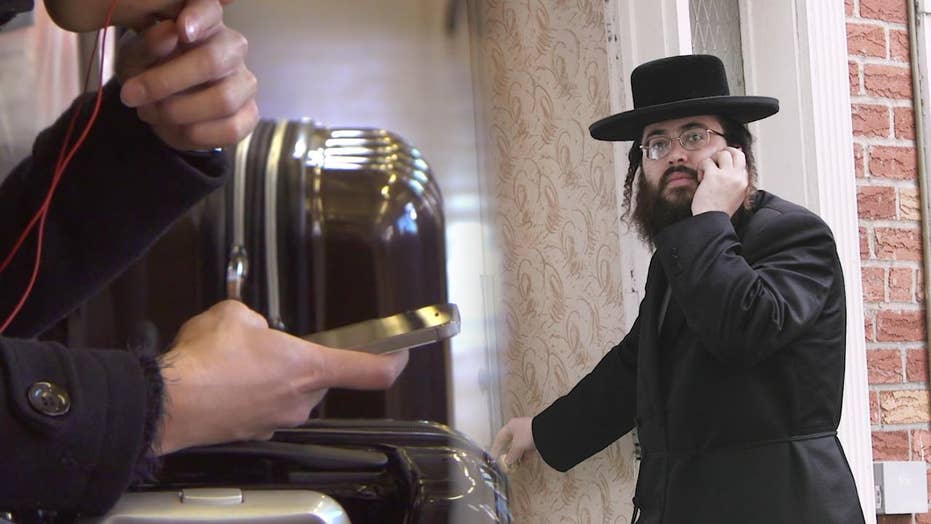 Part 2: Many Hasidic Jewish communities in New York and neighboring New Jersey forbid the use of smartphones, social media and technology. Why? The answer may come from a watershed moment in the Hasidic culture, where ultra-Orthodox Jewish leaders held a summit in Citi Field to condemn technology.

This is the second of a three-part series on insular enclaves of ultra-Orthodox Jews, the struggles they face and the controversies that follow them.

The father of five was summoned to a meeting with leaders of his ultra-orthodox Hasidic Jewish sect in Kiryas Joel, N.Y., a village of some 22,000 about 50 miles north of New York City.

The Satmar Hasidic leaders, a council known as the Vaad -- wanted him to understand they knew he was on the internet, even though he was posting messages under a fictitious name.

The point: No matter what he did, the Vaad was on top of it. The father got a warning familiar to many in Hasidic communities: If you do not abide by the rules governing nearly every facet of your life, your children will be denied enrollment in our private Jewish schools (yeshivas).

Within this deeply religious community, families send children to yeshivas, where they are taught traditional religious texts. Yeshiva expulsion – virtual excommunication - would bring intense shame to a Hasidic family.

“It’s the Vaad. They don't let you have smartphones, computers, laptops, DVD players," said the man, a Kiryas Joel resident who spoke to Fox News on the condition of anonymity for fear of reprisals. "I wasn't even saying anything bad on social media. I was asking a question. But you are not to question anything" concerning Hasidism.

In many Hasidic enclaves, such as this one in Brooklyn, signs warning about smartphones and the Internet are common. (Benjamin Nazario)

Many Hasidic communities, though not all, are highly insular, determined to shut out as much of the outside world and its perceived deviancy as possible. Education at yeshivas emphasizes the Torah and other religious teachings, particularly for boys, who are being prepared for possible futures as rabbis. This faith-centric instruction doesn't leave vast amounts of time for math and English.

For the rabbis, who can wield enormous influence over the smallest details of followers' lives -- including such intimate matters as the use of contraceptives, which is nearly always prohibited -- technology is a threat: It enables personal connections and access to views and information from non-Hasidic sources.

Five years ago, a rabbinical group, Ichud Hakehillos Letohar Hamachane, sponsored a seminal event for ultra-Orthodox Jewish men at Citi Field stadium in New York that drew tens of thousands of people. Speakers emphasized the “filth” and “evil” of the internet.

The spokesman for the event, Rabbi Eytan Kobre, told reporters at the time that the internet and smartphones posed “the most difficult spiritual challenge” for Orthodox Jews, not just those who are Hasidic. 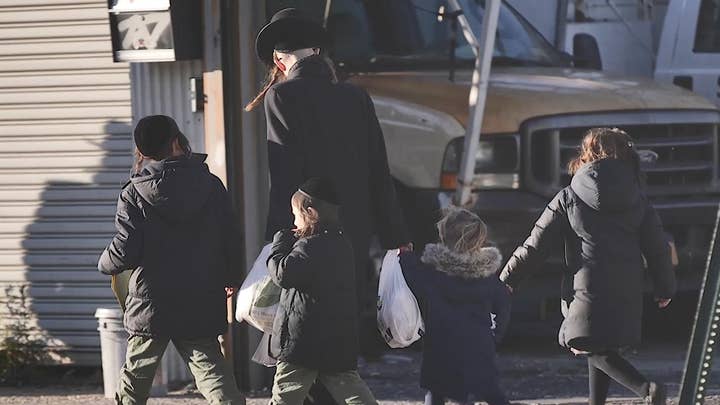 Kobre, who is not Hasidic, told Fox News in a recent interview that quite simply, to Orthodox Jews, there is no need to surf the Internet or explore a marketplace of ideas, because the truth is right there in the Torah.

Kobre said that technology is “doing damage to relationships, privacy, human dignity, the ability to succeed in school and at work.”

Ultra-Orthodox Hasidic sects typically see technology and electronics as doorways to destructive behavior and forbid their practitioners from having such things as television, smartphones, and computers. (AP)

“The environment of the digital age is far more conducive to addiction than anything humans have experienced in their history,” said Kobre, who writes about the issue for Mishpacha magazine, a leading publications for Orthodox Jews worldwide.

As a result, many Hasidic communities have developed rules specifically banning the possession of electronic devices, making exceptions only under special circumstances – like, say, needing these tools in order to run a business. Even then, use is tightly restricted and closely monitored.

Take smartphones, for instance: These handhelds are allowed for men as long as they are inspected by rabbis and registered by what some call, with sarcasm that is considered a major act of insubordination, the "technology police" or "thought police."

Women are allowed to have “basic” or flip phones, but not smartphones.

"It's like we're in North Korea or China," said the Kiryas Joel resident, who has a second phone that Vaad enforcers do not know about.

On at least one occasion, in 2015, rabbis from Kiryas Joel sent parents a contract to sign, declaring that their phones “are in accordance to the rules of the community and yeshiva,” and adding, “We also confirm that we do not possess in our home another cellphone/smartphone, except for the ones mentioned above.”

Another nearly-all Hasidic town, New Square, N.Y., makes parents vow to obey bans on technology in writing when they register their children for school.

Hasidic communities' tech limitations are not just in small towns like Kiryas Joel and New Square that are situated far from big cities, though.

In Brooklyn, for instance, posters blamed "mothers with smartphones" for teens who have strayed from Hasidic life.

Of the more than a dozen Hasidic rabbis and yeshiva officials Fox News reached out to for comment, none responded. One man,  working at a front booth at a small building in Kiryas Joel where smartphones and other gadgets are checked for compliance with the restrictions, took a message from a Fox News team that made a personal visit. But there was no subsequent call or email message.

Orthodox leaders outside the Hasidic enclaves have defended the consequences that schools impose.

“They consider technology to be an area of danger which requires limits and standards,” Kobre, the rabbi, said of the school leaders. “If we just limit the availability of technology for students, and say, ‘You can’t have a smartphone but your folks can have them,’ what are we really saying? Do as we say, not as we do? It would be educationally inappropriate. It would backfire.

"We have to have the appropriate home environment, otherwise we’re setting ourselves up for failure and hypocrisy.”

He rejected any suggestion that enforcing standards --whether they be about dress codes or having a television set or the internet -- are oppressive. Critics, he said, seem to want "educational anarchy."

Another rabbi who is Orthodox but not Hasidic said avoiding temptations that lurk on the internet is best accomplished by not wading into the technology pool at all.

“It’s not easy for us, it’s a sacrifice,” said the rabbi, who spoke on condition of anonymity. “We’re holding on tight; we have to have the moral courage" to steer clear of tech.

“Whatever I don’t want to do, I’m going to leave out of my arm’s reach, I’m going to remove the temptation,” he said. “As far as our community leaders, they feel an enormous responsibility to use the wisdom that they have, and which guided Orthodox Jews for thousands of years, to see through this infatuation with this untested medium.”

Nuftuli Moster, who grew up as one of 17 children in a Hasidic home in Brooklyn and now advocates for more secular studies in Hasidic schools, said the perceived overreach by community leaders stuns even him.

"I myself am taken aback," Moster said, adding that he gets calls from parents who have received letters, delivered to them by their children, informing them that having internet access on their computer, or a telephone without the filter, puts the youngsters' yeshiva enrollment at risk.

"They force you to use their filtering system. They make it challenging for parents, they have a grip on them when it comes to the children and schools. Parents say the [leaders] sent them a letter that said they don't have a filter on their phone.”

Moster, who founded Young Advocates for Fair Education (YAFFED) six years ago to push for more secular studies in yeshivas, said: "It's ridiculous how far they go with it. They know how to manipulate people and force them to do what they want."

Technology’s numerous and alternative sources of information threaten the nearly absolute power that rabbis and the Vaad are accustomed to having, experts say.

“The internet poses an unprecedented challenge,” said Samuel Heilman, chairman of Jewish studies at Queens College in New York and author of "Who Will Lead Us? The Story of Five Hasidic Dynasties in America.”

“But this is violated all the time,"  he added. "It’s like the three staircases in the Jewish play ‘Fiddler on the Roof,’ where one staircase was just for show but went nowhere.”

Heilman said that many Hasidic people have a rabbi-approved phone "for show," but also an unfiltered one they regularly use. He also said he has often seen Hasidic men in public libraries going on the internet or reading books that are forbidden by their religious leaders.

“When I walked in, they quickly look at me to make sure I am not someone spying on them.”

For Kobre, an ordinary ride a few days ago on a New York City train summed up the perils of technology.

The rabbi stood in the crush of humanity on the packed train and looked around him.

“Every single person, without exception, whether they were sitting down or standing, was looking down at their devices,” Kobre recalled. “For me it was a scene out of a horror movie, a zombie movie. What could they possibly be looking at that is more important than their own thoughts, about their families, their life goals?”