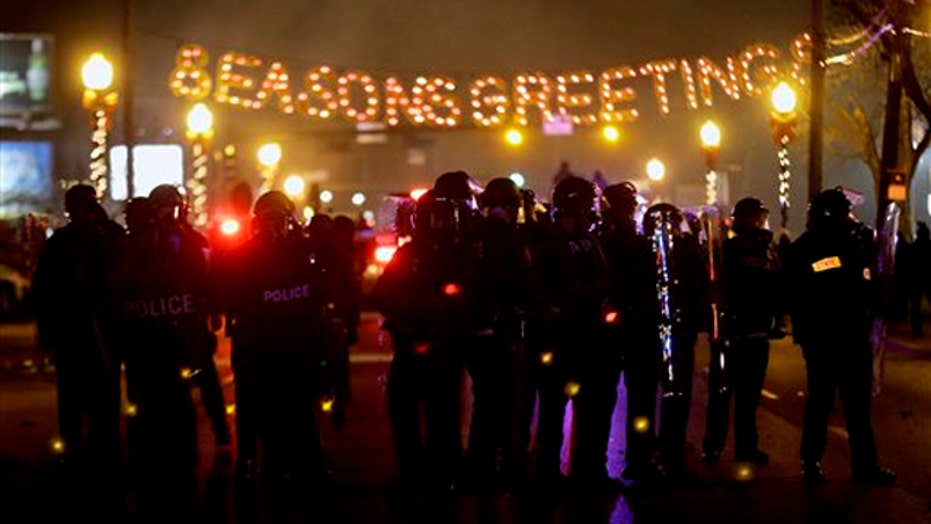 Violence erupted in the St. Louis area overnight, leading to more than 80 arrests, as protesters fired more than 100 gunshots and burned and looted as many as 25 buildings and vandalized police cars in Ferguson, Mo., after a grand jury did not indict a white police officer who shot and killed an 18-year-old black man in August, authorities said Tuesday morning.

"We have no loss of life, but I am disappointed the night turned out this way," St. Louis Police Chief Jon Belmar said.

Belmar said he heard more than 150 shots ring off in the night.

"What I've seen tonight is probably worse than the worst night we had in August," Belmar said.

St. Louis County prosecuting attorney Bob McCulloch announced the decision not to indict Police Officer Darren Wilson on Monday evening. A grand jury of nine whites and three blacks had been meeting weekly since Aug. 20 to consider evidence in the fatal shooting of Michael Brown, 18. The panel met for 70 hours and heard from 60 witnesses.

McCulloch stressed that the grand jurors were "the only people who heard every witness ... and every piece of evidence." He said many witnesses presented conflicting statements that ultimately were inconsistent with the physical evidence.

"These grand jurors poured their hearts and soul into this process," he said.

"We are profoundly disappointed that the killer of our child will not face the consequence of his actions," the family said. "While we understand that many others share our pain, we ask that you channel your frustration in ways that will make a positive change. We need to work together to fix the system that allowed this to happen."

Brown's mother, Lesley McSpadden, was sitting atop a vehicle when the decision was announced, and burst into tears and began screaming before being whisked away by supporters.

President Obama addressed the nation less than an hour after the decision was announced, pleading with protesters to remain peaceful.

"I join Michael's parents to ask anyone who protests this decision to do so peacefully," Obama said. "Let me repeat Michael's father's words: 'Hurting others and destroying property is not the answer. I do not want my son's death to be in vain.'"

But soon after McCulloch's statement, a crowd gathered in Ferguson and erupted in anger, throwing debris at police and knocking down a barricade after McCulloch's announcement. Several gunshots were heard on the streets.

The crowd converged on a barricade where police in riot gear stood along the street. They pushed the barricade down and began pelting police with items, including a bullhorn. Officers in armored vehicles lobbed canisters of irritants that made people's eyes and lungs burn, dispersing crowds after a police car was vandalized, business windows shattered and gunshots rang in the streets.

Protesters hugged a barricade and taunted police, sometimes with expletives. Some chanted "murderer." Gunshots were heard down the street and somebody threw a water bottle that bounced off a police shield.

Some in the crowd reportedly tried to stop others from taking part in vandalism and other violent reactions.

Early Tuesday, the FAA activated a temporary flight restriction over Ferguson for safety reasons. Only police aircraft would be allowed to fly over the area, the FAA said in a statement.

Wilson, 28, shot and killed Brown on a Ferguson, Mo. street following a scuffle on Aug. 9 as the teenager and a friend walked back from a convenience store. Brown's body lay in the street for four hours in the summer heat, and neighbors later lashed out at authorities, saying they mistreated the body.

According to testimony released by McCulloch's office Monday night, Wilson said Brown hit him in the face after a confrontation. Wilson drew his gun in fear that Brown would knock him out. Wilson said Brown nearly dared him to shoot Brown.

Wilson said he managed to pull the trigger, and the gun "clicked" twice without firing before a shot went through the window. Wilson said Brown stepped back and then looked at him with the "most intense, aggressive face."

"The only way I can describe it, it looks like a demon, that's how angry he looked. He comes back towards me again with his hands up."

Brown took off running and Wilson followed him. Wilson said Brown eventually stopped and approached him. Wilson yelled to Brown to get on the ground. Wilson alleges Brown kept coming toward him and put his hand under his waistband of his pants.

Wilson said Brown was looking like he was going to tackle him. Wilson then fired shots toward Brown's head, killing him.

The grand jury testimony includes the accounts of many witnesses whose names are not listed in the transcripts.

One testified that he was working in a nearby building and saw Brown leaning through the police vehicle window and "some sort of confrontation was taking place." He said a shot rang out and Brown fled as the officer chased him with his gun drawn. The witness said Brown stopped and turned but never raised his hands. He said Brown "ran towards the officer full charge." The officer then fired several shots, but Brown kept rushing toward him, the witness said.

The shooting triggered riots and looting in and around the Ferguson area, and police responded to protesters with armored vehicles and tear gas. Protests continued for weeks -- often peacefully, but sometimes turning violent, with demonstrators throwing rocks and Molotov cocktails and police firing smoke canisters, tear gas and rubber bullets.

At times, the debate surrounding the shooting has focused as much on authorities' response -- which also featured officers equipped with military-style gear, including armored vehicles, body armor and assault rifles -- as the shooting itself.