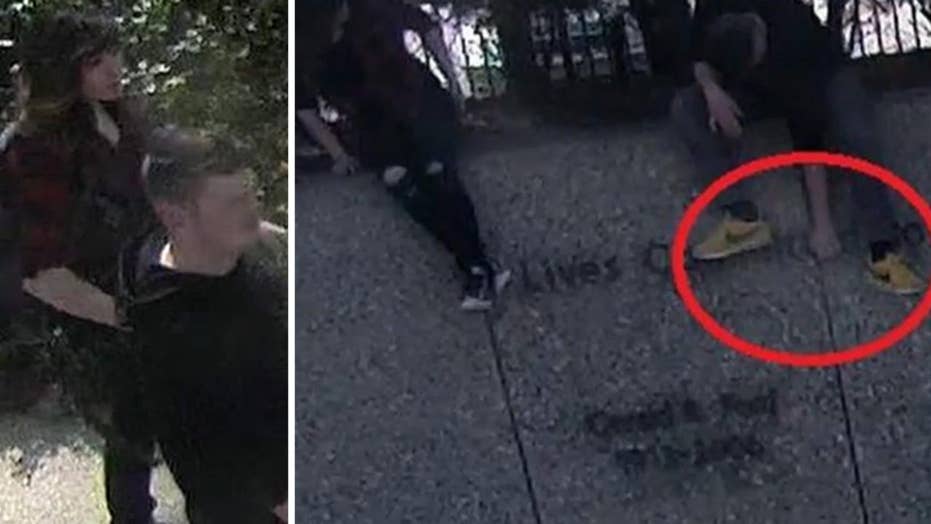 A manhunt is underway for a male and female skateboarder accused of 'extreme vandalism' at the gravesite of the former president and first lady at the Gerald R. Ford Presidential Library and Museum in Michigan.

The Grand Rapids Police Department said on Facebook the incident happened around 4 p.m. on March 27 on the property of the Gerald R. Ford Presidential Library and Museum in Grand Rapids.

In surveillance footage released by police, a man and a woman can be seen arriving on the property on skateboards.

After kicking the skateboards toward the site, the couple can be seen sitting on a wall while appearing to pry away the letters.

A man and woman who can be seen trying to pry off a letter at the gravesite of former President Gerald Ford and First Lady Betty Ford at the Gerald R. Ford Presidential Library and Museum in Grand Rapids, Michigan. (Grand Rapids Police Department)

The two suspects eventually took the letter "E" from the word "committed" off the wall of the burial site, where the phrase “Lives Committed to God, Country and Love” is inscribed along with the names of the Fords and the years they were born and died.

Museum officials told FOX17 they had to spend $400 to replace the stolen letter.

FLORIDA AUTHORITIES SEEKING DRIVER WHO ALLEGEDLY STOPPED FOR PERSON CROSSING, THEN HIT THEM WITH CAR

Museum officials said they hope the two suspects are soon found, and view the act as extreme vandalism. They are also looking into other legal action against the pair, FOX17 reported.