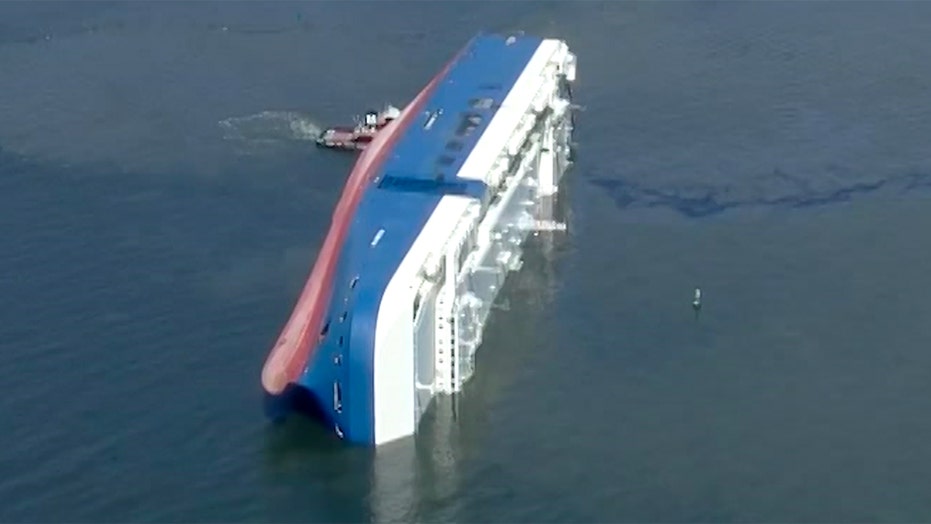 Crew members working around the clock to remove Golden Ray

The ship sits in the St. Simons Sound, one of the nation's busiest ports. Hundreds of crew members are working around the clock to remove the ship and progress is underway.

SAVANNAH - The MV Golden Ray cargo ship still sits on its side in Georgia’s St. Simons Sound more than seven months after it wrecked and capsized.

The Unified Command hoped to remove the ship before hurricane season – which starts June 1 – but the coronavirus pandemic delayed progress.

Still, hundreds of crew members are working around the clock to salvage and remove the ship from one of the nation's busiest ports.

The Golden Ray in September when it capsized in the St. Simons Sound. (Fox News)

“We have completed the installation of the 80 pilings needed to install the environmental protection barrier," Kip Wadlow, the public information officer for the St. Simons Sound, told Fox News. "Also installed 6 of the 16 lifting lugs needed for lifting the pieces of the Golden Ray once the cutting process begins."

The ship became grounded in St. Simons Sound on Sept. 8, 2019, after departing the Port of Brunswick. At the time, the ship was holding 4,200 vehicles in cargo and 24 crew members were on board.

“During the rescue operation they were initially able to get 20 of the crew members off and 4 crew members were unaccounted for,” Matt Waller, the liaison officer for the St. Simons Response told Fox News.

He said the four missing crew members were eventually found nearly 30 hours after the ship capsized. There were no fatalities.

The U.S. Coast Guard and the National Transportation Safety Board are investigating the incident.

Although the capsize was not as severe as it could have been, it is known as an unprecedented shipwreck.

“There’s certainly been cases where a car carrier has had an incident, but this one is unique given one the environmental conditions, also it's located close to residential areas, and also right next to a navigation channel,” Waller said.

Because of the MV Golden Ray's size – nearly the length of two football fields – the plan is to cut it into eight large pieces. Each section will weigh about 4,500 tons.

“We’re continuing to monitor the position of the ship using digital GPS sensors; this helps us identify if the vessel is shifting or moving,” Wadlow said.

However, the outbreak of the coronavirus pandemic threw a wrench into their plans.

Wadlow said none of their workers have been directly affected by COVID-19, but the pandemic has hit their supply chain of the materials and equipment needed.

“We’re sourcing materials from around the world, including some of our lifting lugs, which are manufactured in Germany," he said. "When COVID-19 is impacting these other communities, that has led to a bit of a slowdown being able to get the materials we need to complete the removal process."

Before the coronavirus pandemic began, the Golden Ray had a positive impact on tourism.

Marcie Kicklighter, the manager of the Golden Isles Convention and Business Bureau, said the Golden Ray created a human-interest story that everyone was genuinely interested in.

“We have seen wonderful gains in tourism here. It’s hard for us to really attribute whether an uptick in tourism is due to the ship,” Kicklighter said.

The team leading the salvage says the Golden Ray incident is unlike any other. With hurricane season less than a month away, the team says they have to balance speed with safety.

“We are moving as quickly as we can as safely as we can to ensure the protection of our workers, the local community and our environment,” Wadlow said.

The salvage and removal team has developed a coronavirus plan that aligns with the CDC and the state of Georgia guidelines, including social distancing for their workers.

“We’re working 7 days a week, 24 hours a day when possible to remove the golden ray as quickly and safely as possible,” Wadlow said.