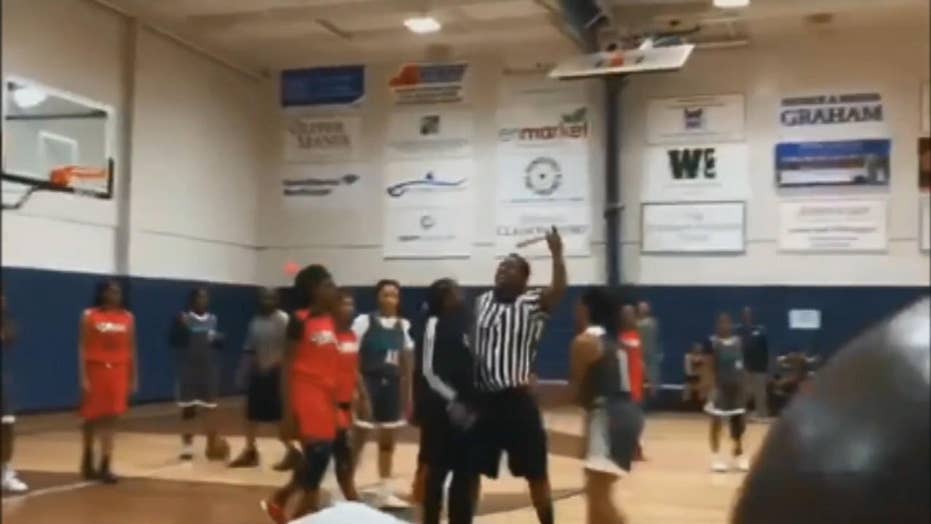 A high school basketball tournament in Savannah, Georgia erupted into chaos when the referee called a foul against one team.

A brawl broke out during a high school girls basketball game in Georgia and reportedly involved the referee and adults from one of the team’s organizations.

The Savannah Lady Warriors were facing off against the GLA Shockers from Eatonton over the weekend during a tournament at the Jenkins Athletic Club in Savannah, WTOC reported.

The heated moment was caught on video and appeared to show Marcus Fowles, who was refereeing the game, initially get into a dispute with a woman who was reportedly thought to be a parent of one of the Shockers players, the outlet said. The incident quickly unraveled after the referee, who spoke to WTOC, called a foul.

"When she came out of stands, I sit there and I blow the whistle, technical foul,” Fowles told the outlet. “You have to leave the gym. She tells me 'I don't have to go anywhere.'”

He also claimed that Darius Little, the director of the Shockers team, is the woman's husband and went on the court also, WTOC reported. Little would not confirm to the outlet that they were married.

Little shared a different perspective with WTOC about how the fight unfolded.

"It was not right for him,” Little told the outlet. “She didn't swing at him. What he did was push her and drew up his hand like he was ready to box her.”

Curtis Foster, the coach of the Lady Warriors, also shared his account of the incident with the outlet.

"She told him she wasn't going anywhere. Then, the gentleman came from behind,” Foster said. “The other coach came over and started stomping on him, so at that time, my assistant coach helped me grab one of the guys to get them off him.”

He said the situation “was ridiculous.”

“I've never seen anyone get beat down like that," Foster added.

The incident was reported to authorities on Monday, WTOC said.

Little told the outlet that the group shouldn't have reacted that way.

"I hold accountability for my organization for not keeping their composure and being humble and just letting the game get over and just pulling the kids and walking away," Little said.