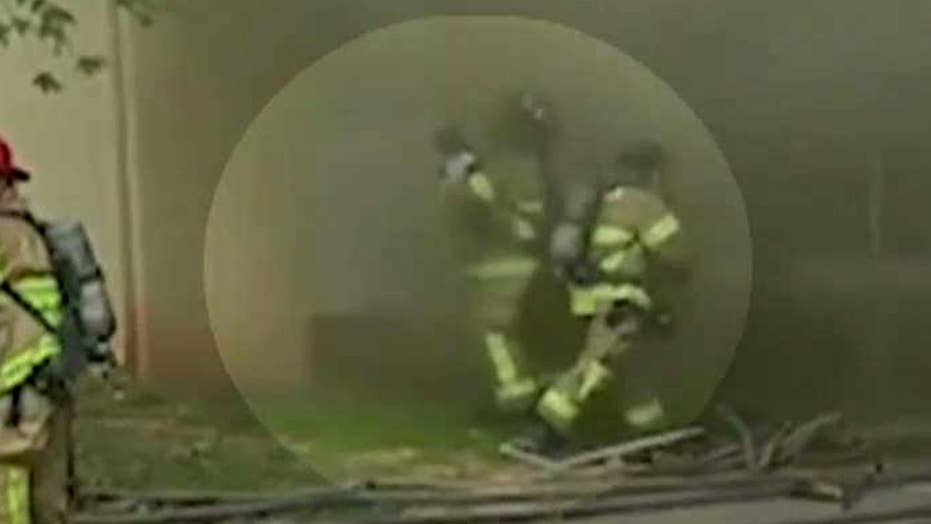 It happened in a flash. A father in Georgia, desperate to save his child from the smoke and flames quickly filling his apartment, tossed his baby from the second floor of a burning apartment building.

Fortunately, DeKalb County firefighter Robert Sutton, who was among the first firefighters to arrive at the Parks on Glenwood, caught the baby in one swift move.

CUBS FAN, 9, HAS PRICELESS REACTION WHEN PARENTS SURPRISE HIM WITH TICKETS

"He was a little guy, so when I heard his father yelling 'Help', and saw him hanging out the window with the baby in his arms, I just went into action. I just did what any of the other firefighters out here would have done," Sutton told Fox 5's Portia Bruner Wednesday.

"I just said 'Drop him.' He did and I am blessed to have been in a position to catch the baby," said Sutton, who grew up not far from the apartment complex. "It was my first time in a situation like that," said Sutton.

Plumber Larry Carter recorded the rescue on his cell phone. Carter and other contractors were doing renovations on the building next door when the fire erupted. He stopped to record the fire as the smoke started billowing from the windows.

Capt. Tom Burrell was visibly moved as he watch the video of the rescue with Bruner.

"I just hope that this helps people understood the hard work and training that goes into being a firefighter," Burrell said as he stood in front of the burned building Wednesday. "There's not really one thing that prepares you for what Firefighter Sutton and his colleagues encountered yesterday. It's good training. It's years of experience and having a good sense of situational awareness. I'm just really proud," he added.