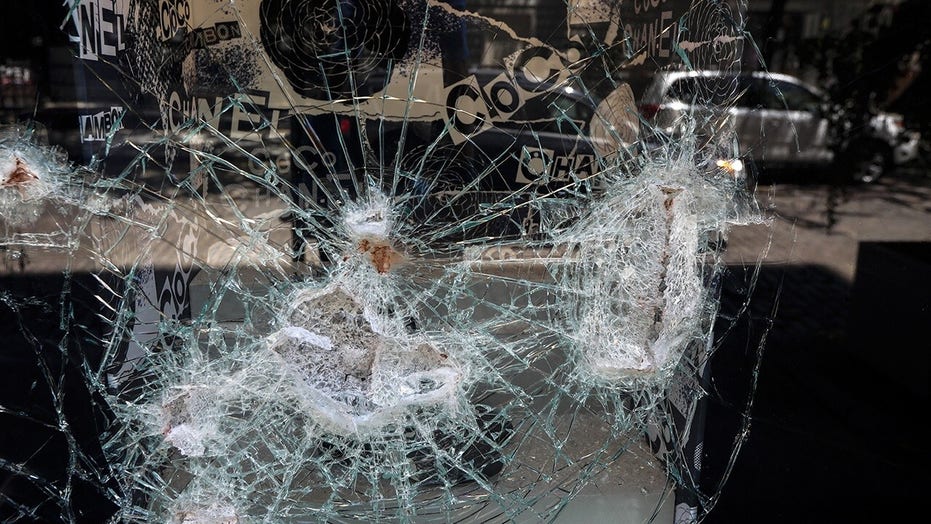 As riots continue to wreak havoc on cities across the country, officials have continued to point to "outside influencers," along with anarchists and opportunists, who have hijacked the otherwise peaceful demonstrations against police brutality following the death of an African-American man, George Floyd, in Minneapolis last weekend.

According to multiple U.S. intelligence sources, law-enforcement officials in various departments nationwide and analysts monitoring the activity, the playbook in every city is almost the same: the peaceful protests are organized, and a point place is designated for people to gather in the daylight hours.

But, as the night falls and thousands go home, the looting and discord are ignited by a fresh round of people camouflaged with dark clothing and masks, armed with spray paint for graffiti and sometimes homemade weapons, and their nefarious behavior continues well into the early hours.

Part of a flyer calling people in Los Angeles to "come out and protest" Monday night.

"The most important thing to realize is the difference between is between the protestors and the rioters. The protestors are mostly peaceful, and the rioters who come next are Antifa going into areas with Black Lives Matter [BLM] signs," said Lorenzo Boyd, an assistant professor for diversity and inclusion and director for the Center for Advanced Policing at the University of New Haven. "It is a mob mentality, really."

Many officials concurred that while they may be a small amount of crossover between the protesters and rioters, it is generally limited. And, while the umbrella of BLM is being used, elements seemingly aligned with Antifa have been commandeering the organization's name.

Images and footage online showed the looting and destruction were being committed by a mix of races and ethnicities, but a giant spotlight has been shone on Antifa as agitators.

And, baffling officials: the level of intelligence-sharing and organization involved from what appears to be the Antifa wing.

"We had no idea it was this sophisticated," one high-ranking source within the Minneapolis Police Department, who was not authorized to speak on the record, said. 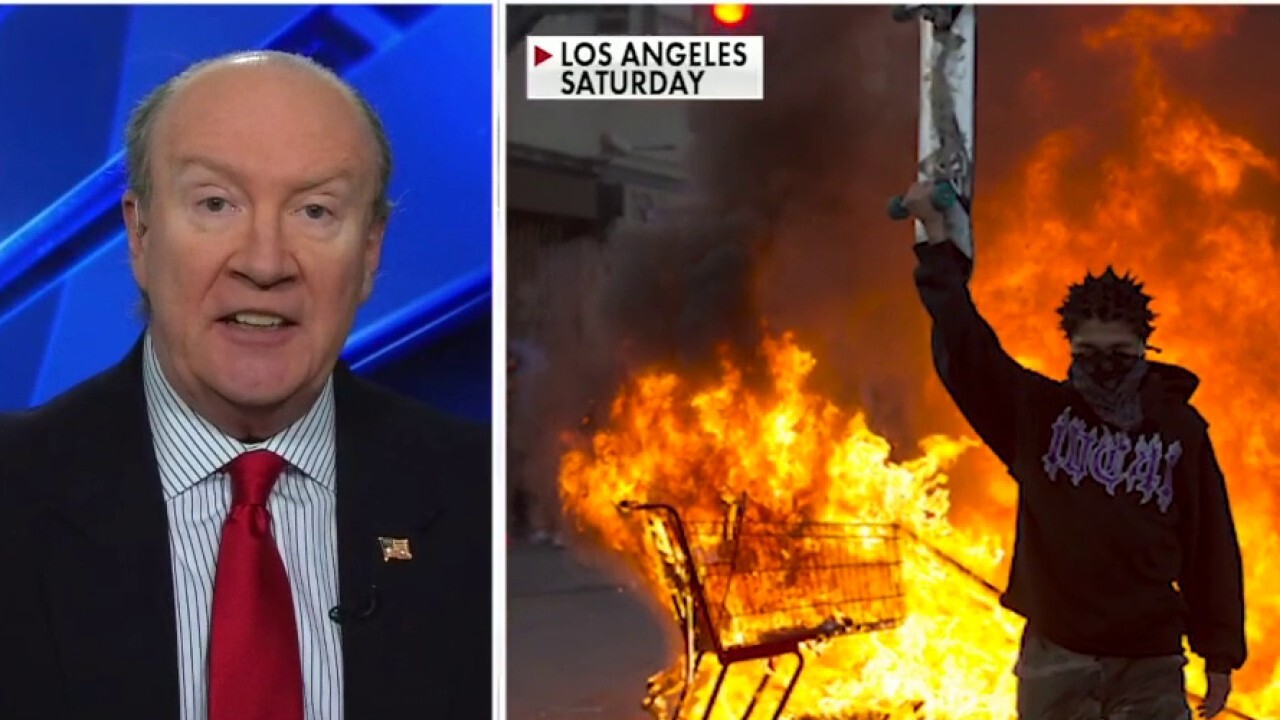 Andy McCarhty: Antifa are terrorists, we don't need to designate them

Those causing the trouble seemingly would coordinate through social media and encrypted apps on the backs of the peaceful protesters late at night, the insider continued.

"The rioters use different weapons like Molotov cocktails and slingshots, and even tennis rackets so they can launch rocks from a block away, and you can't see it coming," the source said.

There have been other tactics, as well.

"We will get a lot of police calls about the KKK being somewhere, but when we go to the place, no one is there," the source said. "But, even if it amounts to nothing, all those calls have to be documented."

President Trump this week has vowed to designate Antifa a domestic terrorist organization, and Attorney General William Barr has said that "groups of outside radicals and agitators are exploiting the situation to pursue their own separate, violent and extremist agenda," and that "the violence instigated and carried out by Antifa and other similar groups in connection with the rioting is domestic terrorism and will be treated accordingly."

Although Antifa is traditionally understood to be a leaderless movement, analysts and law enforcement on both state and federal levels have been working to piece together coordinating figures pulling strings.

"President Trump wants to designate Antifa a terrorist group, but Antifa has no structure or centralized leadership, but that doesn't mean that there aren't leaders now emerging," observed Tony Schiena, the CEO of security firm MOSAIC. "I don't believe it's a coordinated riot but do believe that groups are utilizing it to push their agendas and misguided individuals are buying into it and being opportunistic and looting which basically becomes copY-cat rioting."

In one case, Pittsburgh police on Sunday issued an arrest warrant for a man they believed played a key role in inciting violence in the city on Saturday night.

The suspect: 20-year-old Amazon employee Brian Jordan Bartels, who was facing charges of "institutional vandalism, rioting and reckless endangerment of another person." Bartel allegedly was identified in a video donning all-black and "breaking the windows out of a marked Pittsburgh Police vehicle Uptown, against the wishes of peaceful protesters who tried to stop him," police said.

A list of others arrested in Pittsburgh on Sunday night showed at least two apparently were minors, and the others ranged in age from 19 to 54, but most were in their twenties. Around one-third of those arrested were women.

Meanwhile, in New York, it is believed that the groups have operated using encrypted communications and seek external funding for bail money. One source connected to the NYPD pointed out that political and celebrity vows to bail out those arrested across the country have inflamed the situation and further emboldened the violence.

Moreover, rumors were being stirred up across social media to conjure up fear and anxiety in communities even in far-reaching counties such as Suffolk County in Long Island, a common terrorist tactic, the police source said, adding that federal and local police, in recent days, have infiltrated the various rioting clusters to ascertain further information below the radar.

"But, those doing the damage are from all walks of life, kids to educated adults. Some come in groups, and some come alone," the official continued.

One known Antifa offshoot in New York, as investigated by Fox News, came together for planning meetings regarding various social causes in early 2019 and was comprised mainly of university students, local writers and artists, some former U.S. military members and minority groups passionate about multiple causes ranging from LGBTQ rights and Palestinian rights to Native American and immigration issues. Ready-made "F-- the Police" signs stood at the ready whenever needed, and a few of the most vocal in the group typically advised newcomers on how to deal with such things as tear gas or police pushback.

The effort was led primarily by a university professor and self-proclaimed human rights activist with extensive experience in protest movements. Little vetting was done on those who joined the group, but when it came to discussing anything potentially criminal, all discussion went underground.

In Chicago, Mayor Lori Lightfoot has stressed that "there clearly was coordination" among the looting faction and that "they were clearly listening to our radio traffic."

"The number of U-Haul trucks that magically showed up in front of stores, car caravans that dropped people off and broke windows, and they were hustling the goods out into the backs of the cars," she added. "Absolutely, it was organized – there's no question whatsoever about that."

Weapons recovered in Minneapolis after a weekend of riots. (Provided by source to Fox News)

Furthermore, Richmond, Va., Police Chief Will Smith emphasized during a Sunday morning news conference that "we have people from across the country who have traveled many states to be here" and that they "know that this is an organized effort."

Several officials, including Minnesota Department of Corrections Commissioner Paul Schnell, have pointed to white-supremacy groups as also having penetrated the riots. He said Sunday that law enforcement was cognizant of their presence on the ground, but it remained unclear how many there were and if they belonged to a specific outfit.

Ian Bradbury, the president of Terra Nova Strategic Management, a Canadian advisory and strategy firm that has enabled the counter-violent-extremism sector to better resolve complex challenges, said that the most observable of those committing violence and riot behavior included local street gangs, local and out-of-state anarchists and Antifa groupings – using black bloc tactics centered on vandalism of public property and rioting – as well as unassociated individuals.

"Some far-right elements have been observed acting as provocateurs, but with only minor observable representation thus far in comparison to other actors. Should the destabilizing conditions continue, these observations may shift as more interests become involved," he asserted.

As for just how "outside" the rioters were, those on the ground contend it's been a mixed bag of locals as well as opportunists from rural areas and neighboring states. Several sources interviewed by Fox News indicated that there was little to prove an overwhelming outside presence, as most arrests in cities seemingly were those living in and around the area.

The aftermath of riots Friday in Minneapolis. (Brian Peterson/Star Tribune via AP)

But in the case of Detroit, as per Mayor Mike Duggan, many have traveled from out-of-state to contribute to the calamity. On Friday, he claimed 65 percent of those arrested were from outside the Detroit area and even well beyond Michigan's borders. That number jumped to 75 percent on Saturday night.

And, as Boyd pointed out, many of those arrested this weekend in Boston stemmed from outside the urban hub and were from New Hampshire, Vermont and rural pockets of Massachusetts.

Officials also were rushing to develop a clearer picture of the involvement of foreign actors and cyber instigators in the calamity, both in pushing narratives and as propaganda victories.

"Chinese propaganda has been quick to label the American government as incompetent as the U.S. deals with an intricate network of interstate activists using technology to exploit revolutionary lessons learned since Ferguson, and perfected in places like Portland, Oregon, against unprepared communities across America," global-risk analyst Dennis Santiago conjectured. "The Chinese clearly remain worried that their mishandling of the novel coronavirus outbreak will have severe repercussions from the global community as post-COVID-19 re-opening and realignment of supply chain dependencies plays out."

He also highlighted the role cyber has played in adding fuel to the fire.

"Social-media engines have had to contend with a new series of both artificial intelligence and expert-system robotic attacks from abroad in recent times, particularly pushing the Chinese narrative that the U.S. is an incompetent government," he said. "Born out of worry about the novel coronavirus, the extent to which it has was a contributor to domestic U.S. events remains to be seen. There are other... robotic-narrative campaigns sourced within the U.S. that are equally powerful. This is still an election year, and the presidential election is divisive."

Experts largely have concurred that the extended lockdown to squash the spread of the coronavirus, or COVID-19, created something of a "perfect storm" that thousands of looters have been able to exploit – either driven by pent-up frustration or loss of income.

But, with mass riots and little in the way of "social distancing," some analysts feared the worst was still to come.

"The riots have underplayed the COVID-19 threat," Schiena added. "We are potentially facing disastrous consequences with a potential severe spike in cases, forcing an extended lockdown which would damage the U.S. economy even further."