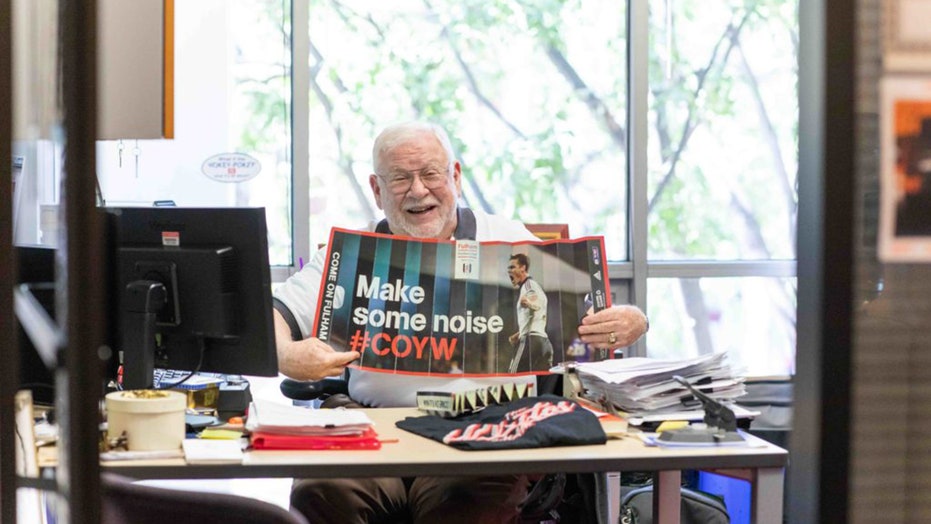 A soccer fan’s request for a personalized license plate celebrating his favorite team was granted Tuesday after scoring a free speech victory against the California Department of Motor Vehicles (DMV), which initially determined the slogan might be deemed offensive.

Jon Kotler, a lawyer and constitutional scholar at the USC Annenberg School for Communication and Journalism, has been a devoted fan of the London-based soccer team Fulham Football Club. He wanted to show his support with a vanity plate of the team's slogan: “Come on You Whites.”

But he ran into a roadblock when the DMV rejected his request for the vanity plate using an acronym for the team’s slogan, “COYW,” claiming it could carry “racial overtones" and “connotations offensive to good taste and decency.”

Harry Arter of Fulham celebrates scoring the second Fulham goal with teammates during the FA Cup Third Round match between Fulham FC and Aston Villa at Craven Cottage on January 04. The team is wearing its signature white jerseys. (Photo by Justin Setterfield/Getty Images)

The slogan is inspired by the white jerseys that Fulham soccer players wear. European soccer clubs are often referenced by their uniform colors: London club Chelsea F.C. is called The Blues, while Liverpool F.C. is nicknamed The Reds.

“The freedom to speak as one wishes in the face of government opposition to it is central to what it means to be an American,” Kotler said in a news release after the victory. “My only regret is that it took a lawsuit to force the state of California to do what the law required of it.”

Jon Kotler applied for a license plate that would read COYW, an abbreviation of "Come on You Whites," a slogan used by fans of London-based Fulham Football Club, referring to their signature white shirts. (Pacific Legal Foundation)

When the DMV refused to change its position -- even after Kotler provided news clippings and other evidence to show that the slogan was not racially charged -- the 78-year-old filed a First Amendment lawsuit, according to his lawyers at the libertarian-leaning nonprofit Pacific Legal Foundation.

The DMV has settled the lawsuit and will issue Kotler his vanity plate in an expedited manner, the firm said.

The DMV also agreed to acknowledge that the slogan “COYW” does not carry racial connotations and that the rejection was not meant to imply that Kotler was a racist, the firm said.