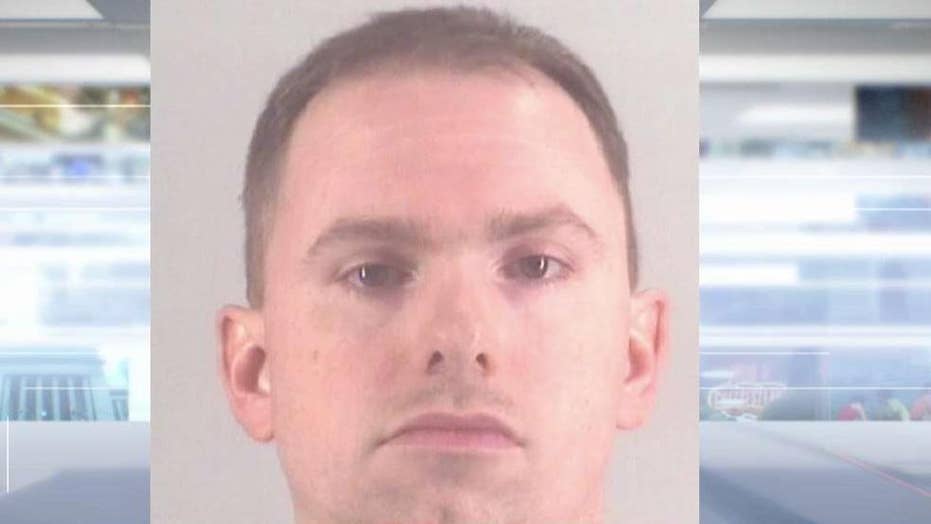 A former Fort Worth, Texas police officer has been charged with murder for firing into a home during a welfare check and killing 28-year-old Atatiana Jefferson; Casey Stegall has the latest.

The white Fort Worth police officer accused of shooting a black woman inside her home over the weekend, killing her, has been jailed on a murder charge, online court records revealed Monday.

The murder charge against Aaron Dean was made public hours after the officer resigned from the force. Bond was set at $200,000.

Atatiana Jefferson, 28, was gunned down early Saturday after police were summoned to her Fort Worth home to conduct a welfare check by a neighbor who reported seeing Jefferson's front door open. Bodycam footage released by police showed two officers canvassing the property before one officer, later identified by investigators as Dean, shouted, "put your hands up, show me your hands," and fired through a window.

Interim Police Chief Ed Kraus announced Monday that Dean was placed on detached duty and stripped of his badge and firearm after he was served with his written administrative complaint yesterday.

Aaron Dean was jailed on a murder charge Monday in the deadly Fort Worth shooting. (Tarrant County Corrections Center)

"My intent was to meet with him today to terminate his employment with the Fort Worth Police Department. However, the officer tendered his resignation this morning before we met," Kraus told reporters Monday. "Even though he no longer works for the city, we will continue the administrative investigation as if he did. The case will be completed and reviewed by the chain of command.

Bouquets of flowers and stuffed animals piling up outside the Fort Worth home on Monday, where a 28-year-old black woman was shot and killed by a white police officer. (AP)

"Had the officer not resigned I would have fired him for violations of several policies including our use of force policy, our de-escalation policy and unprofessional conduct," Kraus added.

Mayor Betsy Price, appearing next to Kraus, said Jefferson was "unjustly taken from her family" and that city leadership has set in place motions to bring a "third party panel of national experts" in to review the city's police department.

"To Atatiana's family: It’s unacceptable," she said. "There is nothing that could justify what happened on Saturday morning. Nothing."

Kraus also said he expected a "substantial update" by tomorrow on whether criminal charges will be filed against Dean.

Dean's letter read: "Effective immediately I am tendering my resignation from the Fort Worth Police Department." The letter was released by the state's largest police union, the Combined Law Enforcement Associations of Texas. The group’s executive director, Charley Wilkison, said that Dean has not yet hired an attorney but that one will be provided with financial support from the union.

The shooting also has led politicians to question the officer's use of force.

"It seems like this police officer made a very quick judgment to shoot her through this window and that makes absolutely no sense at all," Rep. Marc Veasey, a Democrat, told the Fort Worth Star-Telegram on Sunday night during a candlelight vigil at Jefferson’s home, which hundreds of people reportedly attended.

"Our welfare check turned into a death, and that should never have happened," Fort Worth City Councilwoman Kelly Allen Gray told the newspaper. "Our people, our citizens who call the police, should know the police are going to come and answer their cares and concerns in a way that does not result in a tragedy."

Raw video: A black Texas woman was shot and killed by a white Fort Worth police officer who was called to the woman’s home for a welfare check, authorities said.

Fort Worth police said in a statement that after "perceiving a threat, the officer drew his duty weapon and fired one shot, striking the person inside the residence." Officers then entered the house, located a firearm and started performing emergency medical care, investigators said.

However, the bodycam video released to media included blurred still frames showing a gun inside a bedroom at the home, The Associated Press reported. It's unclear if the firearm was found near Jefferson, and police have not said that the officer who shot her thought she had a gun.

Police Lt. Brandon O’Neil said yesterday afternoon that the officer had been on the force since April 2018. At a brief news conference at police headquarters, O’Neil confirmed that the officer did not announce he was a police officer before he fired the deadly shot and that the failure to do so was part of the department’s investigation.

O’Neil also said Jefferson's 8-year-old nephew was in the room with Jefferson when she was shot. He said representatives of the police department have spoken with the woman's family and "shared our serious and heartfelt concern for this unspeakable loss." Jefferson's family members have said she was watching her nephew at the time.

The Fort Worth Police Officers Association, in a statement released to media, announced it was "urging the Fort Worth police department to conduct a thorough and transparent investigation, and through that investigation, we hope to gain clarity and understanding of what exactly transpired."

"Police officers take an oath to protect and serve all citizens in our great city and it is every officers’ worst fear to use deadly force in the line of duty," it added. "We are thankful for our community leaders who seek to unite during times of grief instead of divide and we hope that collaboration and peace will help guide us forward."

Jefferson was a 2014 graduate of Xavier University in New Orleans and earned a bachelor's degree in biology, the university said.

"Our prayers and thoughts are with her family and friends as we gather as a community in prayer," President Reynold Verret said in a letter to the Xavier community. "As we wait for details of this incident to unfold, let us cling to our mission of justice and humanity and seek answers to this tragedy."

Her sister, Amber Carr, described the shooting as "another one of those situations where the people that are supposed to protect us are actually not here to protect us."

"You know, you want to see justice," she told KXAS, "but justice don’t bring my sister back."

Another one of her sisters, Ashley Carr, described Atatiana Monday as a "smart, ambitious, kind person with a nurturing spirit" that "any parent would be proud to call her their daughter."