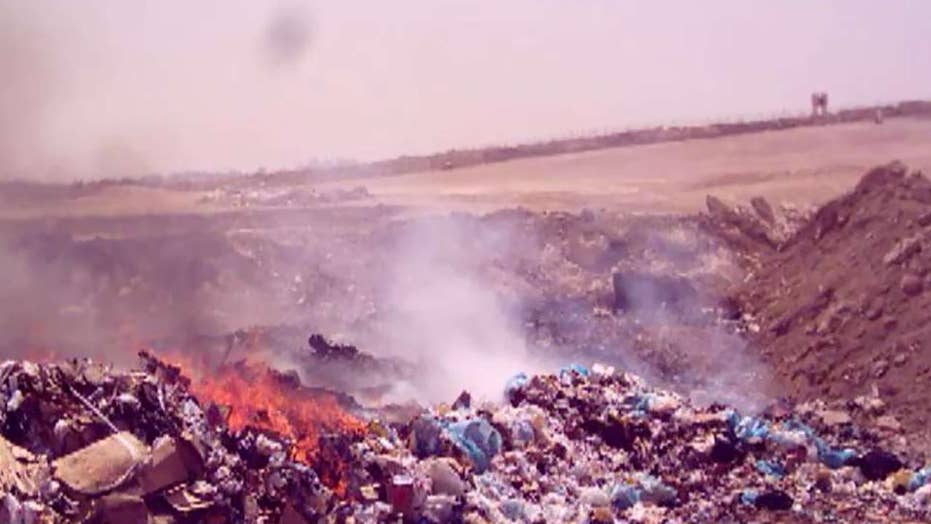 Fox News has discovered pits as large as football fields existed next to a number of military bases during the Iraq War; makeshift junkyards, many ignited by jet fuel, left to smolder 24 hours a day. More than 130,000 vets have reported exposure; Will Carr reports from Los Angeles.

INVESTIGATIVE UNIT EXCLUSIVE – The dangers of burn pit exposures at Forward Operating Base Marez in Mosul, Iraq, were first noticed when the U.S. military presence was at its height, but nothing was done to correct the problem, Fox News has learned.

A former Army major, who served as the base’s environmental officer back in 2004, said he warned Marez’s top brass of the dangerous chemical compounds that were being released into the air after medical waste, chemicals and trash were thrown into open-air garbage pits and set ablaze. But, he added, his warnings fell on deaf ears.

“They weren’t very receptive when I brought it up,” retired Maj. John “Doc” Nelson said in a recent interview with Fox News’ investigative unit. “We could never get an answer.”

“I’m worried about the burn pits becoming another Vietnam or Agent Orange,” he added, “and I don’t think these vets should have to wait for 25 years for someone to recognize that there’s a problem.”

During the wars in both Iraq and Afghanistan, the burn-pit disposal method was originally adopted as a temporary way to get rid of the massive amounts of waste and garbage generated at numerous bases. A range of materials went to the pits for incineration: plastics, batteries, appliances, medicine, dead animals, even human waste. The items were often set ablaze with jet fuel as the accelerant.

The incineration generated numerous pollutants including carbon monoxide and dioxin — the same chemical compound found in Agent Orange, which left many Vietnam vets sick after it was used as a defoliant in that conflict.

The 65-year-old Nelson says that he was able to see the dangers of the burn pits while serving at FOB Marez.

“It would literally darken the sky,” he said, recalling the large plumes of smoke that rose from the pit and hung over the base.

“I remember one day, I was standing back about 300 feet. I could still see the flames rising above the pit.”

Nelson alleges that the trash piled up at his base’s burn pit over the two years that he was there, and that the smoldering fires almost never went out.

Concerned with the safety of his fellow soldiers, Nelson raised the issue with the top brass at Marez, but he said he soon found out that bureaucracy and red tape prevented implementation of proper procedures.

“I told ‘em it’s not a matter of if, but when,” Nelson said referring to the potential for danger.

“That burn pit kept bothering me, because I could smell it and I could see it. It never stopped burning.

Fed up with the pace that it took to make headway on improving methods for waste disposal, Nelson, along with one of the workers for base contractor Kellogg, Brown and Root (KBR), took matters into their own hands. They gathered volunteers to pull hazardous materials out of the trash piles by hand before they could be added to the smoldering burn pits.

“We started putting pressure on the local level,” Nelson said. “We got some volunteers and we went in and started pulling items out of the pits.”

People who lived near the burn pits attribute medical issues to breathing in toxic smoke; Will Carr speaks with a former private contractor about her conditions.

Marez is the same base where KBR contractor Veronica Landry worked, also in 2004. As first reported on Fox News Channel, Landry recently filed a case with the Department of Labor’s Office for Workers’ Compensation Programs, and last month a judge decreed that open-air burn pits -- where thousands of chemicals were released into the air after trash and other wastes were incinerated at bases in Iraq and Afghanistan -- are connected to lung disease.

“My concern was that we had SOPs [standard operating procedures] that weren’t being followed,” Ray Gelinas, a former KBR contractor who assisted Nelson in the cleanups, said to Fox News. “You just never knew what was being thrown in there.”

It was around September 2004, when Gelinas and Nelson started going to the pits, that they discovered what was being thrown in.

Major Nelson, who served as Marez's environmental officer back in 2004, says that he warned the base's top brass of the dangerous chemical compounds that were being released in the air as a result of the burn pits. (Courtesy of John Nelson)

“That burn pit kept bothering me,” recalled Nelson, “because I could smell it and I could see it. It never stopped burning. I was told that it was burning for a whole year before I got there and a whole year while I was there.

“I started going down to the burn pit because I was growing more and more concerned with the amount of debris, so I started taking a look and I started seeing batteries, the cadmium batteries, the lead. All of that was burning. They were putting the oils and the paints and fuels. All of this stuff, and it was leading to this creation of toxicity and I was becoming concerned about it.”

Nelson says that they also found large amounts of medical waste, like IV drips, needles, bloody gauze and even appendages.

“They would wait until the middle of the night to drop it off,” he said. “The next morning we would show up and there was all kinds of stuff in there.”

According to a 2008 KBR memo on standard operating procedure for burn pits obtained by Fox News, items that were not to be disposed of in burn pits included: propane cylinders, fuel cans, paints, fuels, oils, chemicals, ammunition, explosives, combustibles, medical waste, metals, batteries and tires.

Nelson maintains that not only were all these things put into the Marez burn pits, but there were no protocols in place during his time there.

“Nobody thought. Nobody cared,” he said.

Nelson eventually rounded up volunteers to go and pull hazardous materials out of the trash piles by hand before they were added to the smoldering burn pits. (Courtesy of John Nelson)

Nelson and Gelinas tried to correct the situation by setting up systems to control the problem.

“We did what we could to help with what we had,” he said. “We worked with some way that we could to start controlling this problem. Of course, everything stayed at our level, we never got support from the upper echelons. I don’t think anybody understood what was going on because we were supposed to have incinerators in place.”

Nelson alleges that the incinerators were purchased to properly dispose of hazardous material at FOB Marez but they were never installed and were left to rust away at a storage facility.

A spokesperson from KBR declined to comment on Nelson’s claims, instead referring to a previous statement provided to Fox News.

“At the limited number of bases where KBR operated burn pits in Iraq and Afghanistan, KBR personnel did so safely and effectively at the direction and under the control of the U.S. military,” read the statement. “The government’s best scientific and expert opinions have repeatedly concluded there is no link between any long-term health issues and burn-pit emissions.”

Officials with the Department of Defense’s Central Command (CENTCOM) were unable to confirm for Fox News that incinerators were bought around 2004 for FOB Marez and other bases in Iraq and Afghanistan, saying that records were archived after three years. They said, however, that installation of any such systems might have been delayed due to procedural issues.

“As for installation, the contract with the service provider had to be modified before the incinerator could be installed,” read a statement from CENTCOM officials provided to Fox News.

Nelson alleges that incinerators were purchased to properly dispose of hazardous material at FOB Marez but were not installed. (Courtesy of John Nelson)

Nelson is also a survivor of a suicide bombing that occurred at a mess tent on Marez in 2004. As a consequence of his injuries, which included severe damage to his shoulder joints, and short-term memory loss, he had to retire. His permanent disabilities left him unable to continue practicing medicine when he returned to Maine in 2005. He was unsure what he would do.

Then he started helping a few vets in his community who were having difficulty getting medical assistance and coverage from Veterans Affairs.

“I liked helping them. It gave me some purpose,” Nelson said. “So I kept helping more and more vets.”

Nearly 15 years later, Nelson is still helping vets all over Maine, and even beyond the state's borders.

He opened an office in a building he owns on Main Street in Lincoln, about an hour north of Bangor. Vets come for his assistance in navigating the often-complex VA benefits system. He named his office after Medal of Honor recipient Master Sgt. Gary Gordon.

MSG Gordon, also a native of Lincoln, was killed in the Battle of Mogadishu in 1993. The engagement was the basis of the 1999 book “Black Hawk Down.” The center has pulled in volunteers to help with day-to-day office tasks as Nelson takes on more and more cases.

“I have always felt honored to help our veterans,” he said. “I care about them deeply.”

He also hopes that 150,000-plus veterans on the VA’s burn-pit registry get the assistance they need.

“I think it’s time for the VA to stop giving lip service and creating registries and start doing something with those registries," he said emphatically. "What is the research going to do for us … and how long do we have to wait?”