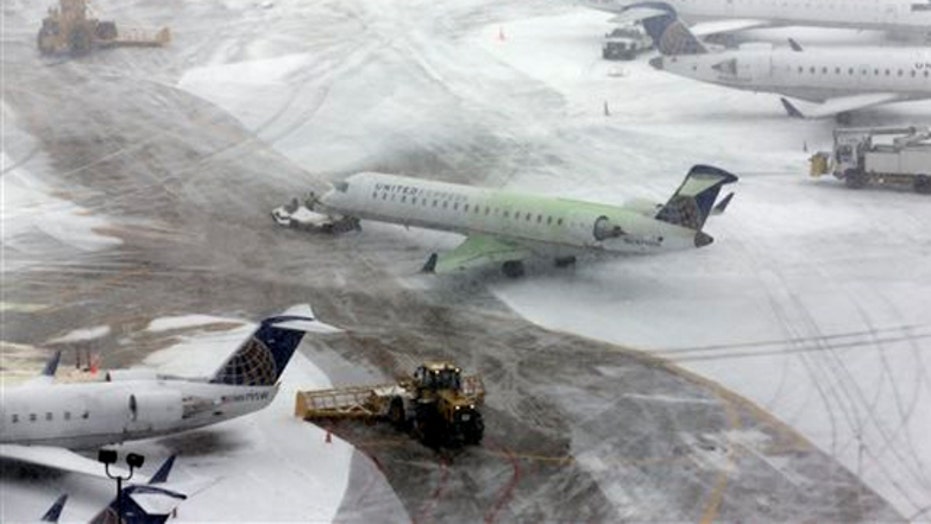 Winter weather cancels thousands of flight into and out of Northeast

Commuters up and down the Northeast experienced an uncomfortable ride to work Tuesday, as forecasters warned that so-called "flash freezing" could make roads dangerously slippery after a day of snow.

Arctic temperatures following Monday's snowfall are expected to bring minus 20 degree wind chills in parts of Pennsylvania, New York and New England, and minus 35 degrees in pockets near the Canadian border.

National Weather Service (NWS) forecaster Bill Simpson told the Associated Press the biggest concern was for areas where rain and slush had pooled on roads before temperatures plunged. "They are going to have a pretty difficult time when that slush freezes," he said.

The plummeting temperatures follow on the heels of a snow storm that dumped more than 19 inches of snow on Chicago and more than a foot on southeastern Wisconsin, deepened off the southern New England coast. It brought accumulations approaching 18 inches in the Boston area and around a foot of slushy wintry mix to Hartford, Connecticut, Providence, Rhode Island, southern New Hampshire and Vermont -- places still reeling from the up to 3 feet they got last week.

The area  is expecting another snowstorm on Thursday that may bring up to an additional six inches in the region, The Boston Globe reported. Another news site reported that the area may see another two feet of snow in the next 10 days.

New York City's snow totals ranged from around 3.6 inches in Central Park to 7 inches in the Bronx while Long Island got 3 inches to 10 inches.

The Philadelphia area received about an inch of snow before the precipitation changed to rain. Forecasters said portions of the Lehigh Valley got up 8 inches, and there was up to a foot in northern Pennsylvania. Much of New Jersey got several inches of snow while parts of northern Ohio received at least a foot.

In Boston, the snow postponed Tuesday's scheduled parade to celebrate the New England Patriots following their Super Bowl victory. The semifinals of the city's annual Beanpot college hockey tournament were pushed back from Monday to Tuesday for the first time in 32 years. School was canceled in Boston and some suburbs for Tuesday and Gov. Charlie Baker ordered a delayed start for nonessential state agency workers to allow more time for clearing roads.

Jury selection in the federal death penalty trial of Boston Marathon bombing suspect Dzhokhar Tsarnaev was postponed for a second day Tuesday, though testimony in the murder trial of former New England Patriot Aaron Hernanez was due to resume.

Massachusetts Bay Transportation Authority riders were warned to expect delays Tuesday because of the cold. On Monday, Boston's MBTA was running despite the heavy snowfall, with delays including one train that lost power south of Boston, temporarily stranding about 50 passengers.