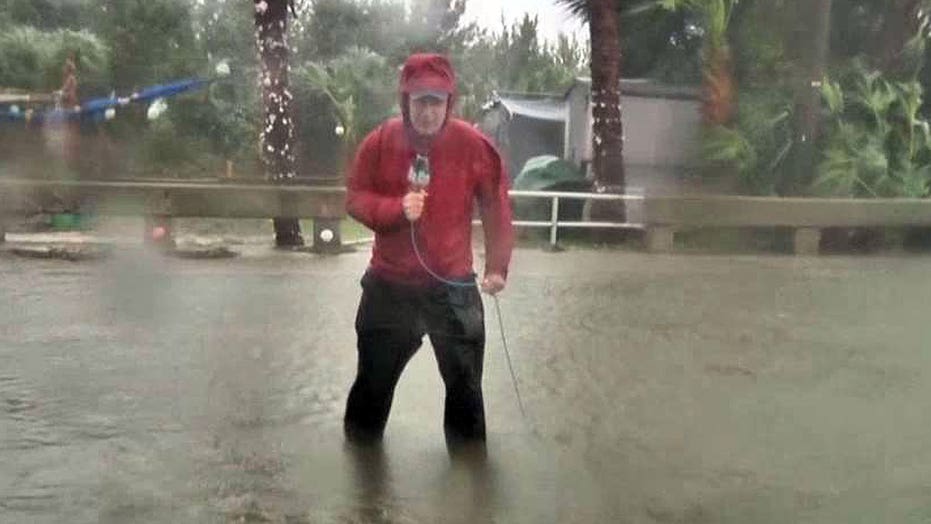 Heavy rain, flooding and wind along the Gulf Coast

DEKLE BEACH, Fla. – The first hurricane to hit Florida in more than a decade wiped away beachside buildings and toppled trees onto homes Friday before plowing inland on a path that could send it rolling up the densely populated East Coast with heavy rain, high winds and flooding.

Hermine quickly weakened to a tropical storm and was spinning inland along the North Carolina coast late Friday. But the National Hurricane Center predicted it would regain hurricane strength late in the weekend after emerging over the Atlantic Ocean. The system could then lash coastal areas as far north as Connecticut and Rhode Island through Labor Day.

The storm’s projected path prompted New Jersey Gov.  Chris Christie to declare a state of emergency Saturday for three counties on the Atlantic Ocean. “The impending weather conditions constitute an imminent hazard, which threatens and presently endangers the health, safety, and resources of the residents of Ocean County, Atlantic County and Cape May County,” he said.

In Florida, Hermine's main impact came in the form of power outages and damage from storm surges. A homeless man south of Gainesville died when a tree fell on him, Gov. Rick Scott said.

He later took to a Blackhawk helicopter to visit the coastal communities of Cedar Key and Steinhatchee hit hard by the damage from flooding and storm surge that crumpled docks and washed out homes and businesses.

Scott pledged that businesses would be eligible for help from the state. But it's unclear whether Florida will get any federal disaster assistance as the state begins to clean up from the storm.

An estimated 325,000 people were without power statewide and more than 107,000 in neighboring Georgia, officials said.

At 2 a.m. Saturday, the hurricane center said the tropical storm's center was about 60 miles west-northwest of Cape Lookout, North Carolina. Forecasters said the storm threatens a dangerous storm surge into Hampton Roads in southeast Virginia. Hermine had top sustained winds of 60 mph and was moving northeast at 22 mph.

Forecasters said the system could strengthen back into a hurricane by Monday morning off the Maryland-Delaware coast before weakening again as it moves north. Tropical storm watches and warnings were posted up and down the coastline.

Amtrak says it has cancelled or altered some service on the East Coast as the storm approaches.

Back in Florida, a storm surge at Dekle Beach damaged numerous homes and destroyed storage buildings and a 100-yard fishing pier. The area is about 60 miles southeast of St. Marks, where Hermine made landfall at 1:30 a.m. in the Big Bend area, where Florida's peninsula and panhandle meet.

Nancy Geohagen walked around collecting photos and other items for her neighbors after the storm scattered them.

"I know who this baseball bat belongs to," she said plucking it from a pile of debris.

An unnamed spring storm that hit the beach in 1993 killed 10 people who refused to evacuate. This time, only three residents stayed behind. All escaped injury.

In nearby Steinhatchee, a storm surge crashed into Bobbi Pattison's home. She wore galoshes and was covered in black muck as she stood in her living room amid overturned furniture and an acrid smell. Tiny crabs darted around her floor.

"I had a hurricane cocktail party last night and God got even with me," she said with a chuckle. Where her bar once stood was now only wet sand and rubble. Pattison and two neighbors managed to set upright a large wooden statue of a sea captain she had carved from wood that washed ashore in the 1993 storm.

In Keaton Beach, about two dozen people waited on a road just after sunrise Friday, trying to get to their homes. Police blocked the road because of flooding.

Dustin Beach, 31, rushed there from a hospital in Tallahassee where his wife gave birth to a girl Thursday night to see if his home still stood.

A hand painted sign on a boarded up bar is seen as Hurricane Hermine nears the Florida coast, Thursday, Sept. 1, 2016, in Cedar Key, Fla. (AP)

"When my wife got up this morning, she said, 'Go home and check on the house. I need to know where we're going after we leave the hospital,'" Beach said.

Cindy Simpson was waiting near her car, hoping her beach home and boats survived. "It's a home on stilts so I put everything upstairs. We have two boats in the boat house, and I hope they're still there," she said.

It was sometime after midnight when Alan Autry, 48, started hearing the large pines in his Tallahassee neighborhood start to crack and fall to the ground.

Then he heard one come down on the top floor of his house. The tree didn't initially crash through the roof, and Autry and his wife went to a neighbor's house. Sometime before dawn, the corner of his house collapsed from the weight of the tree.

"We've been married 13 years and this is our fifth hurricane," said Autry who moved from central Florida six years ago. "By far, this is the worst damage we've ever had."

Tampa and St. Petersburg escaped major damage. Up to 17 inches of rain fell in the area over the last two days.

The last hurricane to strike Florida was Wilma, a powerful Category 3 storm that arrived on Oct. 24, 2005. It swept across the Everglades and struck heavily populated south Florida, causing five deaths in the state and an estimated $23 billion in damage.

The Florida governor declared an emergency in 51 counties and said about 6,000 National Guardsmen stood ready to mobilize for the storm's aftermath. The governors of Georgia and North Carolina also declared emergencies.