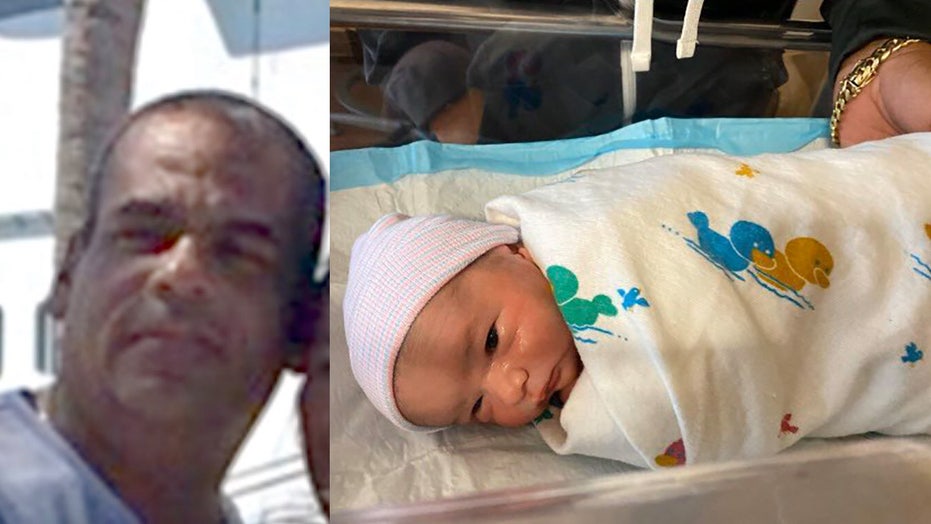 Three women shot dead in a Miami-area home earlier this week were identified late Wednesday after authorities found the man suspected of killing them dead in the woods from an apparent suicide.

Police are searching for the missing 1-week-old believed to have been kidnapped by his father after the triple-homicide, asking the public for information about a white van and a mysterious "blond woman" who might have the baby.

Police believe Ernesto Caballeiro, 49, murdered the women and then kidnapped his son, infant Andrew Caballeiro, fleeing in a white van.

The elder Caballeiro was found dead just past noon Wednesday in Pasco County in a wooded area near Blanton, a town 40 miles north of Tampa, Pasco Sheriff Chris Nocco said in a press conference. He appeared to have died from a single self-inflicted gunshot wound from a rifle, according to authorities. There was no sign of the baby.

Ernesto Caballeiro, 49, was found dead authorities, said Wednesday, a day after his newborn son was last seen at a home where three women were found dead. A search for the baby is ongoing. (Florida Dept. of Law Enforcement via AP)

“There was no indication that the child was in the area,” Nocco said at a press conference, adding that the child’s pacifier was found in the father’s vehicle nearby but bloodhounds did not find the boy. The Florida Department of Law Enforcement had issued an Amber Alert earlier Wednesday seeking information about the whereabouts of father and son. A witness reported a white van similar to the one mentioned in the alert on the side of the highway near Blanton. The father was found dead about 50 yards away.

Police received reports that a blond woman was seen riding with the elder Caballeiro in the white van earlier that day. Authorities are asking the woman to come forward if she has the baby.“I sit here and pray to God, that is true and that she has the baby,” Nocco said. “If that woman is out there, please come forward. I promise you, all we care about is little Andrew is OK.”

The Pasco Sheriff’s Office shared images of the van on Facebook. Authorities are now asking the public to report where they might have seen the van within the past 36 hours. The photos showed the van had a presidential campaign sticker for Sen. Bernie Sanders, and another saying “Outright Rock Records."

“A newborn, obviously without parental care, every minute counts,” Miami-Dade Detective Christopher Sowerby-Thomas said, according to the Miami Herald. “That’s why we’re reaching out to hospitals, schools and other safe havens.”

“Relating to the deceased subject in Blanton: Below are pictures of the suspect’s van. If you have seen this vehicle in the last 36 hours, please immediately call your local law enforcement. The van has specific damage and stickers to help identify it,” the Facebook update said. “Again, the suspect is deceased however, we are trying to gain additional information on the van’s travels.

Electronic billboards along major roads showed images of the father and son, as authorities deployed helicopters and K-9 units in their search, the Miami Herald reported.