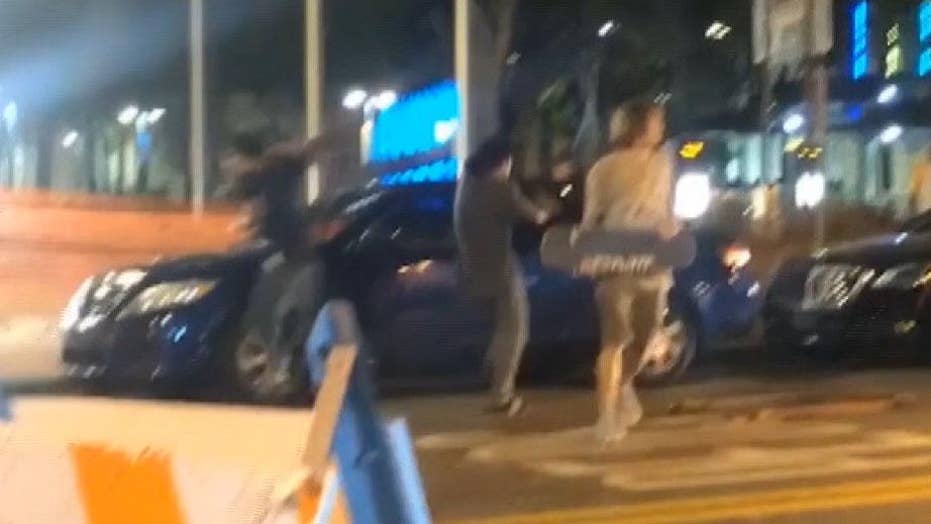 Multiple suspects attack a man using their skateboards in the middle of an Orlando street.

Authorities in Florida are asking the public for help in identifying a group of teenagers captured on video earlier this year attacking two men with skateboards.

The Orlando Police Department released cell phone footage Tuesday taken by a witness that shows the moment that several suspects -- possibly in their late teens to early twenties -- used their skateboards to attack the men.

The incident happened in May in the area of Central Boulevard and Court Avenue in Orlando, according to police.

"As of right now, we're releasing a 60-second clip of what's happened. We don't know maybe what happened before this video started. We may not know what happened after this video started," Orlando police spokesman Cory Burkarth told FOX35. "However, you can see on the video there are a number of witnesses who are at that scene that night downtown, and they watched what happened"

A group of teenagers were seen on video attacking two men with skateboards in Orlando back in May, according to police who recently released video of the assault. (Orlando Police Department)

Burkarth added that police believe witnesses in the area "had very good looks at who the individuals are."

The victims told officers different stories about how the fighting started.

Josue Sanchez said he and his friend, Brett Thompson, were talking to a group of women when the skateboarders tried to talk to the women, triggering the fight.

The altercation was then triggered after one of the skateboarders almost hit them while performing a trick, according to Thompson.

Thompson told police he lost consciousness and was taken to a hospital.