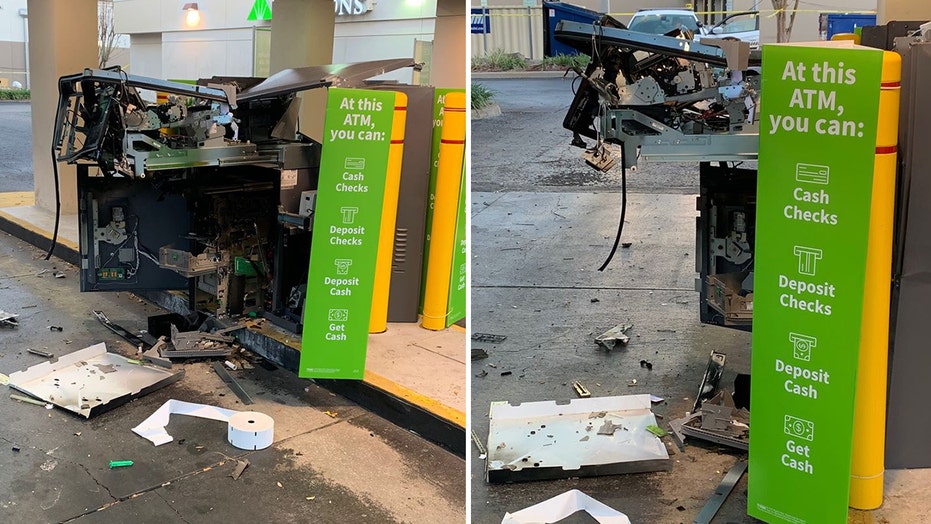 A robbery suspect in Florida apparently blew up an ATM and stole an unknown amount of money in the latest cash machine explosion to hit the area, investigators said Sunday.

The robbery unfolded between Saturday evening and Sunday morning at the Regions Bank on Bell Shoals Rd. in Valrico, east of Tampa, the Hillsborough County Sheriff’s Office wrote on Facebook.

Somebody painted the lenses of the surveillance cameras black before the explosion ripped apart the ATM, exposing its interior, deputies said.

The sheriff’s office released photos of the scene showing ATM debris in the street, without saying what might have triggered the explosion.

The sheriff's office didn't say what might have caused the explosion. (Hillsborough County Sheriff’s Office)

Deputies said they had yet to determine how much money was stolen.

It was unknown whether more than one suspect was involved, deputies said. No suspect descriptions were immediately available.

The incident was similar to two other cases that happened elsewhere in Hillsborough and Pinellas counties in recent months, Fox 13 Tampa reported.

The prior ATM explosion in Hillsborough County happened on Dec. 22, but the suspect in that incident failed to get any money, the station reported.

Deputies were investigating but said it is too early to say whether the incidents were connected.