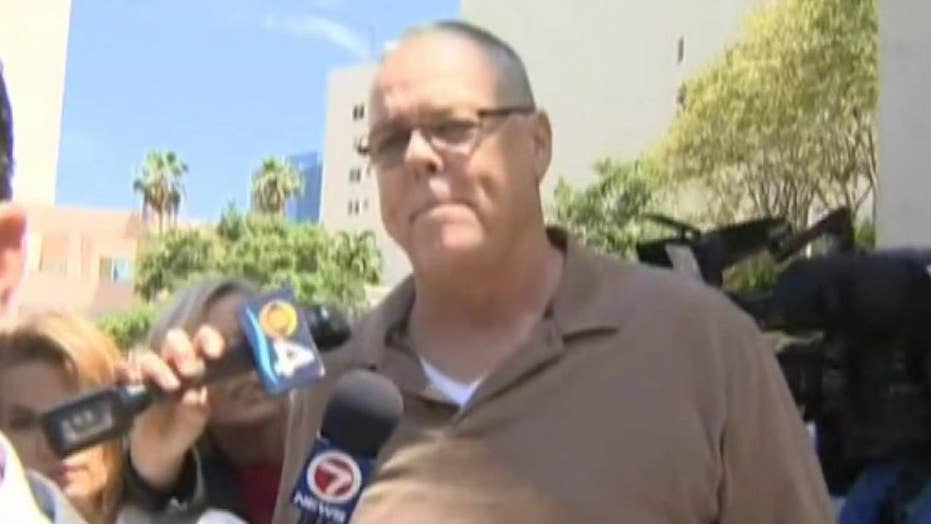 The former Florida sheriff's deputy charged with 11 criminal counts for failing to confront the gunman in the February 2018 Parkland school massacre was released from jail Thursday, according to reports.

Scot Peterson walked out of the Broward County Jail with his attorneys after Circuit Judge Elizabeth Scherer set his bond at $39,500, down from the initial amount of $102,000.

Peterson cannot possess a firearm or take any job involving children, said Scherer, who eliminated a previous requirement that Peterson wear a GPS monitor. His bond is secured by $330,000 in real estate holdings and he will be allowed to go to his home in North Carolina.

Peterson's attorney, Joseph DiRuzzo, has argued that his client should not face charges over his actions during the shooting because he was not legally a caregiver and had no direct responsibility for the welfare of the students at Marjory Stoneman Douglas High School.

“My client lives in North Carolina and has for approximately the last year, DiRuzzo told the judge, according to CBS Miami. "Before that he was a long time resident of Broward County. He worked for the Broward Sheriff’s Office for decades as a school resource officer. My client has no criminal history, my client is not a risk to the community, he is not a flight risk."

DiRuzzo said Peterson was abruptly arrested without warning earlier this week after an internal affairs “name-clearing” hearing at the Broward County Sheriff’s Office.

Peterson, 56, is charged with seven felony counts of child neglect, three counts of culpable negligence and perjury in the shooting that left 17 dead. If convicted, he faces a potential maximum prison sentence of nearly 100 years.

The charges stem from Peterson’s decision to remain outside the school  — where he was the assigned resource officer — while police say Nikolas Cruz, 20, fired 140 rounds from an AR-15 rifle.

Ryan Petty, the father of slain student Alaina Petty, said in a statement earlier this week, “Today marks another step in the search for accountability. … Peterson failed in his duty to protect lives that day, standing behind a cement pillar for 48 minutes while students and teachers were slaughtered.”

Cruz faces the death penalty if convicted of the killings. His attorneys have said he would plead guilty in return for a life sentence.

Scherer is also the presiding judge in the Cruz case, which is expected to go to trial early next year.