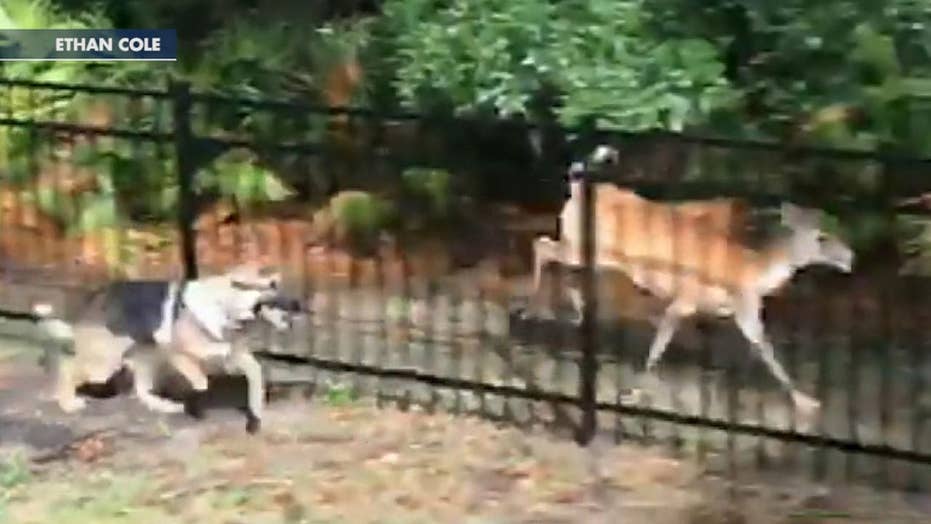 A Florida man captured video of his rescue dog making a new — and unlikely — best friend this week.

Ethan Cole was watching his German Shepherd, Ike, race along the fence around his mother’s Lakewood Ranch backyard. He then noticed a deer on the other side, running along with Ike in a game of tag.

The two animals chase each to one end of the yard and back again several times over the almost 2-minute video. A second pup, a pug, almost gets run over by the excited dog.

“I watched them for a while before I thought to start videotaping,” Cole told the Bradenton Herald. “It was really fun to watch. That deer could have taken off into the woods at any time. They were clearly enjoying each other.”

"He's a big clown. Not a mean bone in his body. He's just a goofy boy all around."

Cole and his mother adopted the dog a year and a half ago, WFLA-TV reported. Ike, now 2 years old, had been timid and shied away from people.

"[He was] very fearful when we got him. He still has some stranger danger issues," Cole told the station. "But he's a big clown. Not a mean bone in his body. He's just a goofy boy all around."

Ike’s new friendship may stand the test of time. Cole told the Herald the doe returned the following day, this time with her fawn in tow.