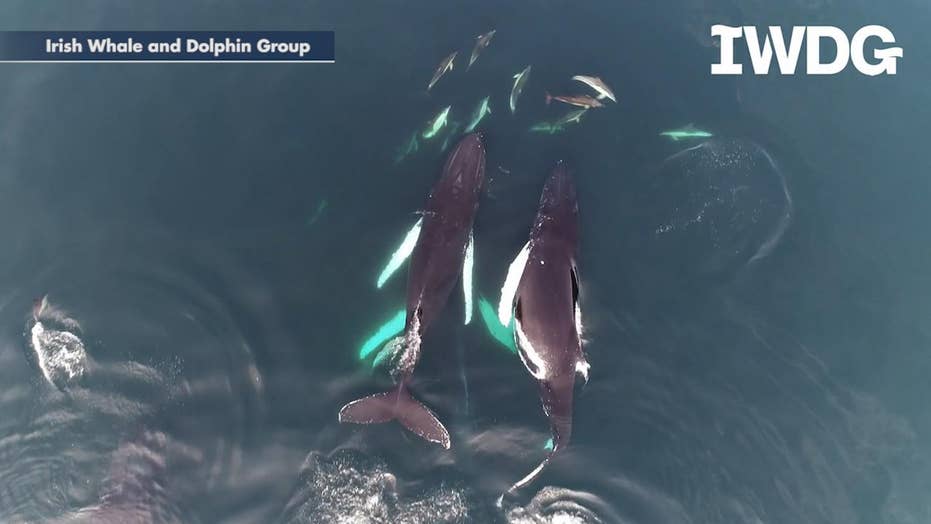 Humpback whales swim with dolphin pod off the coast of Ireland

Raw video: Irish Whale and Dolphin Group captures drone footage of six humpback whales interacting with a pod of dolphins off the coast of Cork, Ireland.

A whale watching group recently captured incredible footage of a group of humpback whales playing with a pod of dolphins off the coast of Ireland.

Four humpback whales are seen skimming the surface of the waters off the coast of Cork in the drone video as they shoot plumes of water out of their blowholes and into the air. A pod of dolphins joins the giant mammals, jumping and zigzagging around the behemoths.

After swimming together for a short while, all the mammals eventually plunge deep beneath the surface and disappear into the waters of the Atlantic.

The Irish Whale and Dolphin Group (IWDG) told Ireland’s RTE it recorded the drone video in order to gather data on the whales' size, migration patterns and breeding grounds in Irish waters.

"On this trip we connected with up to six humpback whales feeding and socializing in offshore waters," said Sean O’Callaghan, science officer with the IWDG. “This allowed us to collect the first set of aerial images and video that will be used to estimate the length and body condition of these iconic giants.”

The group said its WhaleTrack Ireland project is focused on the recovery and conservation of the species and they hope to include other whale species in the future.