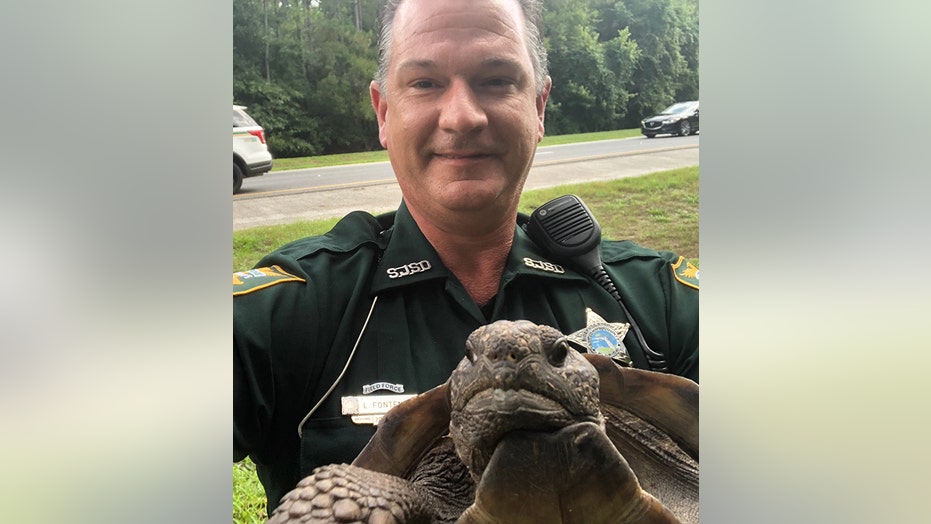 Slow and steady didn’t win the race this time.

A Florida turtle briefly “detained” for impeding traffic Friday was let off with a warning and a selfie, authorities said.

Deputy L. Fontenot conducted the traffic stop on the “Florida native” while on routine patrol along the Nocatee Parkway, the St. John’s County Sheriff’s Office wrote on Facebook.

“At the time of the stop, the suspect identified as "Gopherus Genus" (exact age unknown) failed to clear the roadway when ordered to do so, opting to continue his current activity of walking along the parkway,” the department wrote.

Fontenot “quickly detained” the gopher tortoise and had a “heartfelt” discussion about its slow and steady road behavior, the post said. The suspect was cooperative and the deputy decided to release the turtle in the woods nearby “on its own recognizance” – but not before snapping a picture of the meeting.

"Gopherus was cooperative during the remainder of my encounter with him, so I chose to use discretion and let him go with a warning,” Fontenot said. “In fact, our interaction was so positive, we posed for a selfie together!"

Vehicles are a large contributor to gopher tortoise deaths in the state, according to the Florida Fish and Wildlife Conservation Committee. They often burrow and forage along roads because they are “open and sunny.”

If drivers are tempted to assist a turtle in its crossing, the Humane Society says to “gently carry them across the road in the same direction they were headed.”