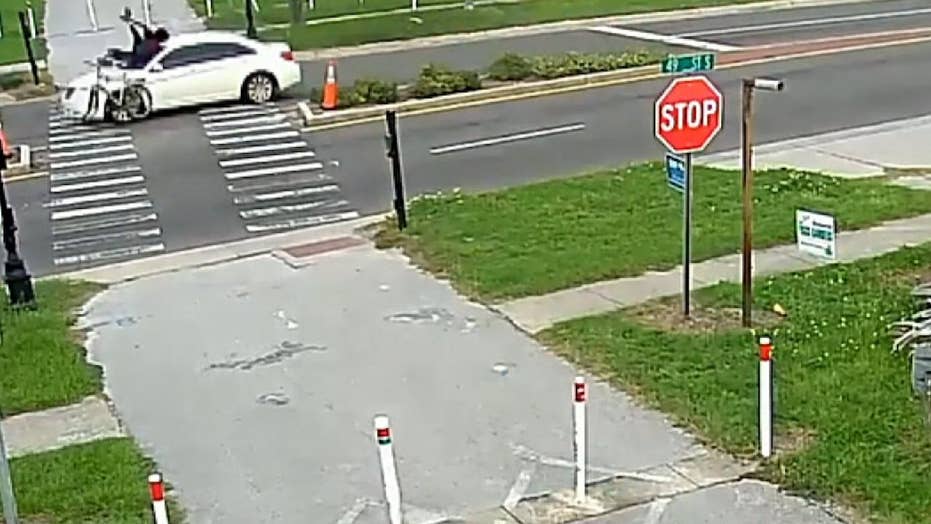 Raw video: Police are searching for the driver who fled the scene after hitting a bicyclist in St. Pete, Florida.

Police in Florida were searching for a suspected hit-and-run driver seen on video striking a cyclist, leaving him with broken bones, and driving away before police arrived at the scene earlier this month.

The cyclist was crossing the street on the Pinellas County Trail in St. Petersburg on Nov. 1, when a white Chrysler 200 sedan failed to stop and rammed the man, St. Pete police wrote on Facebook.

The cyclist suffered broken bones and other non-life threatening injuries.

HIT-AND-RUN DRIVER PLOWS INTO GROUP OF KIDS IN FRONT OF MASSACHUSETTS HOME, SPEEDS AWAY

“This wrist is just fractured, not bad, maybe a month or so to heal,” the man told Spectrum News.

The driver stopped to move the bike off the road but then drove away, police said. However, the man told the station that the driver also asked if he was OK before leaving.

ARMY VETERAN PUSHES WIFE OUT OF WAY BEFORE HE WAS STRUCK, KILLED IN HIT-AND-RUN CRASH, CALIFORNIA POLICE SAY

Street video showed the cyclist riding through a stop sign and into a crosswalk. The crosswalk included yield signs but it was unclear whether they were flashing at the time of the crash, WWSB-TV reported.

The man continued pedaling, appearing to throw up his hands as none of the cars in either lane stopped. Another white sedan sped through the crosswalk and missed the man, but the Chrysler followed behind and made direct contact, sending him hurtling through the air.

Police and the injured man have asked for the driver to come forward.

It was unclear whether police were pursuing charges against the driver.