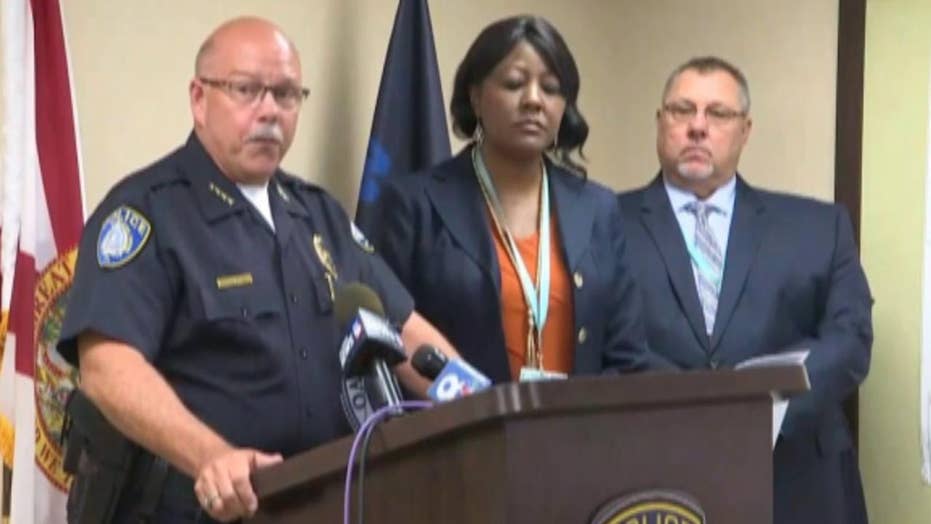 Officials brief the media about the arrest of an eleven-year-old and a twelve-year-old accused of a plot to attack middle school students with knives.

Two middle school students in Florida were arrested Tuesday after they concocted a "plot to kill students" via a variety of weapons, including a pizza cutter, police said.

The girls — ages 11 and 12 years old — "wanted to kill at least 15 people," Bartown Police Chief Joe Hall said at a news conference Wednesday. The two "were waiting in the bathroom for (an) opportunity to find smaller kids that they could overpower to be their victims."

Both girls were searched in a Bartow Middle School office, where a butcher knife was located on one of the students. Knives, scissors and a pizza cutter were also found, according to Fox 13.

The girls admitted to investigators that they were "Satan-worshippers." The girls, Hall claimed, said "they were willing to drink blood, and possibly eat flesh."

“As I sat there last night [and] watched these interviews, I do not believe this was a joke,” Hall said.

A butcher knife was located on one of the students when they were searched in the school office. (Fox 13)

After the girls were taken into custody, authorities reportedly searched their houses and discovered more additional attack plans. A hand-drawn map of the school was allegedly discovered with the words, "Go to kill in bathroom," written on top of it.

One of the text messages exchanged in a conversation found by authorities reportedly read: "We will leave body parts at the entrance and then we will kill ourselves."

A hand-drawn map of the school was allegedly discovered in the home of one girl with the words, "Go to kill in bathroom," written on top of it. (Fox 13)

In a statement posted to Facebook, Hall said no one was harmed in the incident, and thanked school staff for "thwarting this plot from becoming a tragedy."

The police chief said that all safety protocols put in place worked on Tuesday, and reiterated the key law enforcement phrase: "If you see something, say something."

"It worked in this incident," he said.