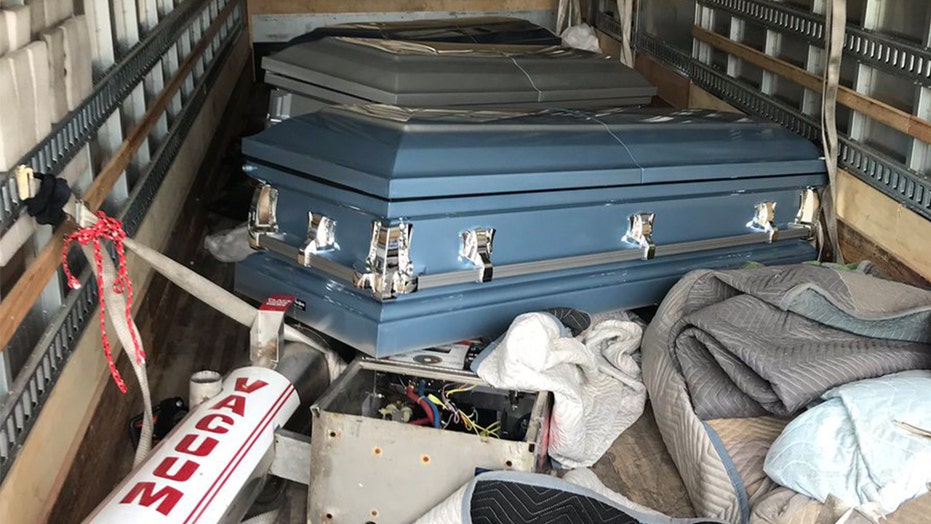 A man was arrested in Jacksonville, Florida, on Monday after he allegedly was driving a stolen box truck with stolen caskets inside, according to Florida Highway Patrol.

Troopers got a call from the Jacksonville Sheriff's Office on Monday morning asking them to be on the lookout for a Ryder truck that was reported stolen from a Jacksonville casket company, Sgt. Dylan Bryan with the Florida Highway Patrol told Fox News.

Troopers spotted the truck and tried to stop it but the driver took off, according to Bryan.

The truck was stopped after the suspect allegedly led troopers on a chase on Interstate 295. (Florida Highway Patrol)

He said for about 25 miles, the suspect, now identified as David Ayers, 39, led troopers on a chase on Interstate 295. Bryan said Ayers was driving below the speed limit, going around 55-60 mph the entire time.

“He was not driving in an erratic manner,” Bryan said.

He told Fox News the pursuit ended before noon on Monday after the truck finally got off the interstate onto Martin Luther King Jr. Parkway and encountered a red light. Troopers then were able to “quickly arrest” Ayers.

The troopers searched the truck and found three caskets inside as well as burglary tools, Bryan said.

Multiple caskets turned up inside the truck. (Florida Highway Patrol)

“At first I was shocked to see the caskets because obviously when you think caskets, you think of someone’s loved one,” Bryan said, adding that troopers “wanted to be respectful with those items” and “didn’t know what to expect.”

Bryan said he “never encountered this before in his 24 years of state service.”

He added, “Where the scene was, was actually two blocks from a funeral home so I walked down to the funeral home to obtain a funeral key, a tool to unlock and open funeral caskets.”

Bryan said he then went back to the scene with the key and when troopers opened the caskets they were relieved to find that they were empty.

Bryan said a payment system for a car wash vacuum and the actual vacuums were found in the truck as well. He said it appeared Ayers “ripped out car wash vacuum machines out of the car wash to get the money out.”

“There could be anywhere from 20 bucks to several hundred bucks in quarters in those machines, depending on how often the owner will empty out those coins,” Bryan added.

Ayers was charged with auto theft, fleeing and eluding an officer, and driving while license suspended or revoked. (Florida Highway Patrol)

He also said Ayers had some prior contact with law enforcement and that his driver’s license was suspended.

Ayers has been charged with auto theft, fleeing and eluding an officer, and driving while license suspended or revoked. Bryan said he also had two outstanding warrants, at least one from out of state, but did not elaborate.