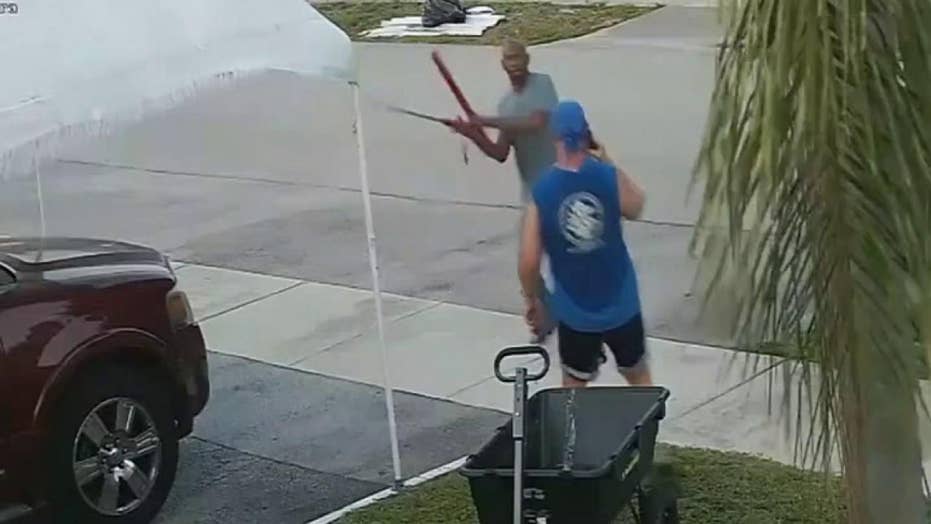 Raw video: Florida man pulls sword on another man during an argument over a trash pile

The jogger claimed he and the attacker had a disagreement over a plastic wheelbarrow found discarded in a pile of garbage, then attacked him with a sword.

A man in South Florida was determined to go down swinging when he unsheathed a sword and attacked a jogger for taking a wheelbarrow from a pile of trash he apparently had claimed, investigators said.

The jogger was running in Oakland Park on July 15 when he came across a pile of bulk trash on the side of the street, the Broward County Sheriff’s Office said.

In the pile he spotted a black heavy-duty cart and decided to take it home, seemingly upsetting the other man who thought he had first rights to the trash. The two “exchanged words” but the jogger quickly ran with the find to his home, police said.

He then realized the man had followed him carrying a slim red object.

Home surveillance footage showed the man removing a sword from a red sheathe and swinging at the jogger. The two wrestled over the cart as the jogger dodged the sword. The man left empty-handed when the jogger told him a security camera was recording them, police said.

The jogger, who later identified himself as Todd Beavers, told WSVN-TV he was “shocked” the man had tried to kill him over a cart.

“When he pulled out the sword, I thought, 'What am I doing?' I thought, 'Is he really going to do this?'" Beavers, who wasn’t hurt, told the station.

Beavers left the cart sitting in the front yard immediately following the incident, police said. Minutes later, a woman who apparently knew the suspect, according to detectives, dragged the cart away while hurling insults at Beavers.

Police were searching for both the sword-wielding man and the woman.