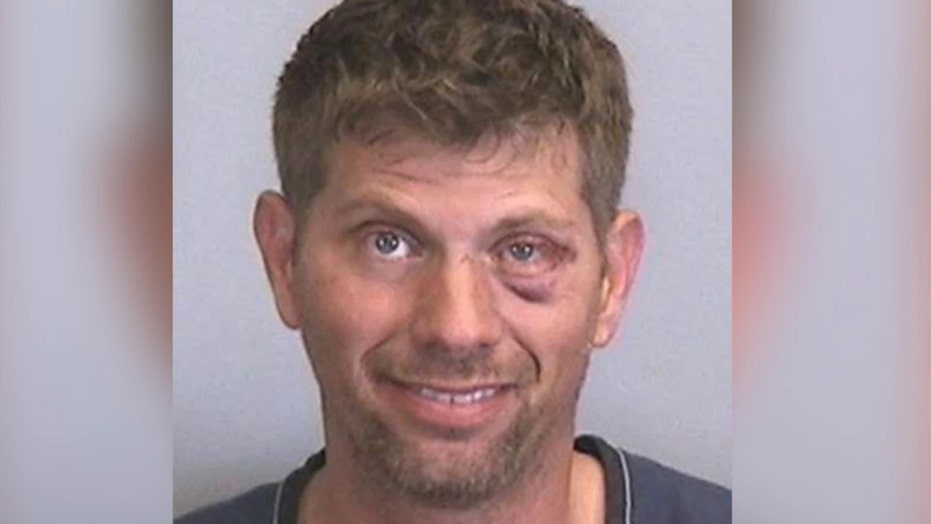 A Florida man was arrested after he reportedly hanged the service dog of a disabled Navy veteran before punching the man's children when they wouldn’t help dispose of the animal, reports say.

Robert Leroy Edwards, 38, was charged with torture inflicting pain/serious physical injury resulting in death after police say he killed Richard Hunt’s black lab by wrapping an electrical cord around the dog’s neck because it was barking, WFLA reported.

Hunt told the outlet that his emotional support dog “Midnight” was staying with his son in  Manatee County on Wednesday when he got a disturbing call.

Robert Leroy Edwards, 38, was also charged with child abuse without great bodily harm, simple battery and contributing to the delinquency of a minor in addition to the animal abuse charge. He is currently being held in the Manatee County Jail on a $62,000 bond.   (Manatee County Jail)

“When I got the call, my son was screaming in the phone, he’s hanging my dog,” said Hunt. “So this was taking place as I was on the phone.”

Edwards then woke Hunt’s other son, who is 16. The teen was sleeping in the home when Edwards asked him to help hide Midnight’s body. When the teen refused, Edwards allegedly punched him in the face, the New York Post reported.

Hunt’s older son went to see what was going on and was attacked by Edwards.

“It’s so terrible what he did to that dog. I keep thinking about how my dog suffered and how she looked at him and cried and whimpered to try and get away and he just - terrible. What kind of person can do that? It’s disgusting,” Hunt told WFLA.

“He needs to have the book thrown at him and if the book’s not heavy enough we need to find more books.”

According to inmate records, Edwards also was charged with child abuse without great bodily harm, simple battery and contributing to the delinquency of a minor in addition to the animal abuse charge. He is currently being held in the Manatee County Jail on a $62,000 bond.

Edwards was renting a room in the home of Hunt’s son at the time of the attack, WFTS reported.