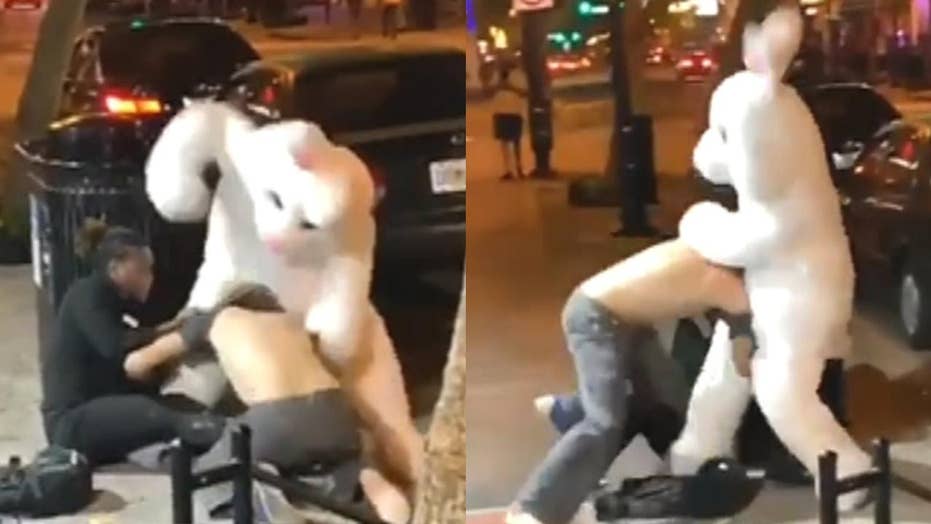 A Florida man, who went viral last year after video captured him in a street brawl with another man while dressed as the Easter bunny, has donned the costume again – this time, in an attempt to avoid a hit-and-run arrest, authorities said.

FLORIDA MAN IN EASTER BUNNY COSTUME CAUGHT IN VIRAL BRAWL IS WANTED IN NEW JERSEY, HAS HISTORY OF ARRESTS

Antoine McDonald, 21, drove his motorcycle through a stop sign and crashed into a carport, which collapsed and damaged a car before he fled the scene on Jan. 16, the Florida Highway Patrol said.

When deputies responded, a neighbor said he had spotted McDonald limping across the yard, the Orlando Sentinel reported, citing an arrest report. Deputies went to McDonald’s home and saw a gray car leaving the driveway.

McDonald was charged with leaving the scene of a crash involving property damage, driving with a suspended license and operating a motorcycle without a license, according to jail records. (Seminole County Jail)

They discovered McDonald, wearing the bunny costume, in the backseat, the report said. Deputies told McDonald to remove the costume before arresting him, but the 21-year-old maintained his innocence.

“I wasn’t in any crash. I’m the Orlando Easter bunny, Google it,” McDonald told deputies, according to the report.

McDonald was booked at the Seminole County Jail and charged with leaving the scene of a crash involving property damage, driving with a suspended license and operating a motorcycle without a license, according to online jail records.

He became a minor video sensation last April when he wore the costume during a fist-fight with a man who allegedly spat on a woman in an Orlando street.

But the attention from the viral encounter exposed a long rap sheet and led to his arrest in connection to a September 2018 burglary in New Jersey.