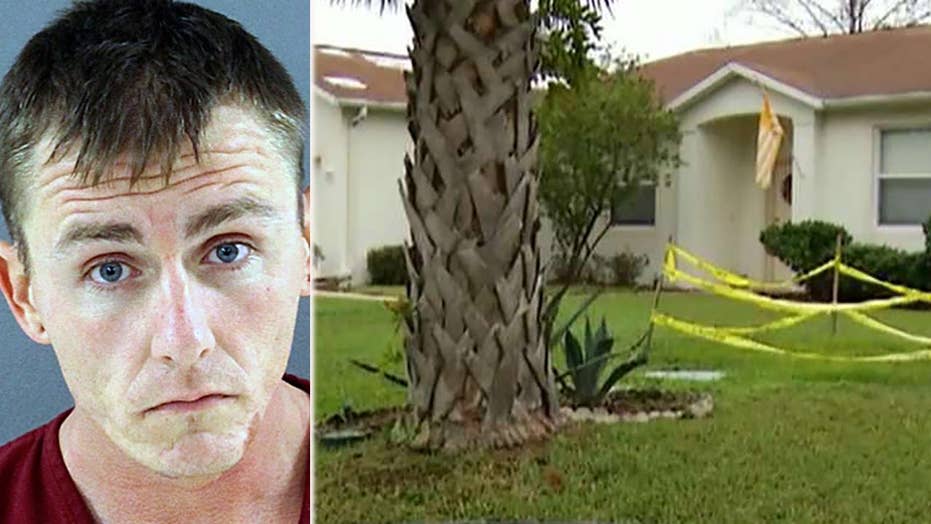 Authorities say a man rigged the front door of his home in plot to electrocute his estranged wife.

A Florida man rigged the front door of his home in a bizarre plot to electrocute his estranged pregnant wife, authorities said Friday.

Michael Wilson, 32, of Palm Coast, intended to cause his wife great bodily harm with the booby trap, authorities said. He was arrested Thursday in Knoxville, Tenn., on charges of attempted aggravated battery on a pregnant person and theft of a firearm.

“This is one of the most bizarre domestic violence cases I have seen in my career,” Flagler County Sheriff Rick Staly said. “Not only did this man plan to electrocute his wife, but he could have injured a deputy or any person attempting to enter this residence. Thankfully this man was found and taken into custody before he could cause the harm he intended.”

Deputies went to the home Tuesday in response to a 911 call from Wilson’s father-in-law.

He had contacted authorities about suspicious statements made by his son-in-law regarding not letting a child touch the front door of the house, Staly’s spokeswoman Brittany Kershaw said.

She said that deputies observed that the front door appeared to be barricaded and there were burn marks near the door handle. When a deputy kicked the door it gave off a large spark.

“Based on observations made by the deputies on scene, it was apparent that the suspect rigged electrical devices to the top door lock and lower door handle in an attempt to electrocute and cause serious bodily injury or even death to whomever attempted to unlock and open the front door of the residence,” she said.

The Daytona Beach News-Journal reported that when the father-in-law, Jon Flositz, went to the house with his wife, they found the word “Hi” and a drawing of two eyes written in lipstick on the home’s sliding glass door.

He had gone to check on the house at his daughter’s urging, Florida Times Union reported.

Ashley Wilson, 29, told investigators after his arrest that she filed for divorce Dec. 6 and that he had been committed to a mental health facility at the end of November, according to the paper. She said he hadn’t returned home since then.

She said a little more than a week ago, he called her apologizing for his absence and wanted to be together again. She invited him to Knoxville while visiting family for Christmas, the paper reported.

She told investigators she got him a room at a hotel and he arrived Dec. 21 but left without explanation two days later. That was followed by text messages to her accusing her of cheating on him, the Times Union reported.

She didn’t speak with him until the next day Christmas Eve and said she calmed him down. He told her he had gone to visit family in Ohio, and she let him know he was welcome back in Tennessee where he returned that day.

According to the police report, she said when he returned one comment he made particularly alarmed her. She said he told her when she goes home to “make sure you use the front door because the garage door is not going to open” and to make sure their daughter wasn’t with her because he didn’t want her getting hurt, the paper reported.

She then contacted her parents about her concerns.

The police report also says Wilson constructed the booby trap with chairs, tape, a shower-type rod, electrical cords, wiring cut from a bedroom lamp and a battery charge with clamps, according to the paper.

The News-Journal reported that in the house deputies found pictures of a sonogram on the kitchen table and sticky-note love letters in the bedroom with a photo album showing Wilson and his wife together.

The paper also reported that a deputy discovered a Facebook account with Michael Wilson’s name and photograph in which the profile status had been changed to “widowed.”

The gun charge stemmed from the alleged theft of a gun belonging to his father-in-law.

Wilson was being held on $150,000 bail and faces extradition to Florida.