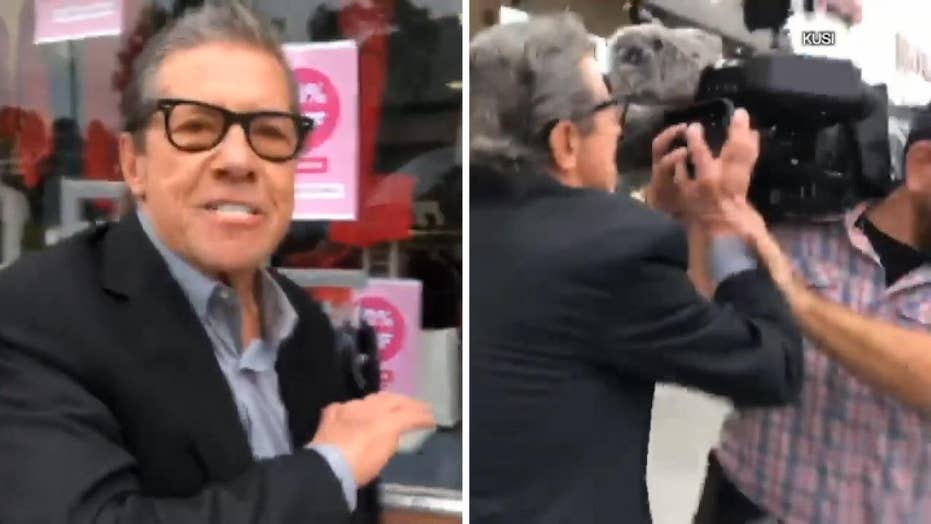 Shop owner investigated by La Mesa police for alleged lewd behavior attacks several members of the media in front of his store.

A store owner in California who was already the focus of a sexual harassment investigation is now facing additional charges after getting into a physical altercation with members of the local media outside his business on Monday.

The La Mesa Police Department said Sunday it was investigating reports of lewd behavior involving Peter Carzis outside his store, Peter's Men's Apparel, after a video of the alleged harassment was posted on social media over the weekend.

"La Mesa PD is aware of the video posted on the La Mesa Happenings group and will be following up with any potential victims," police tweeted.

A screengrab of the video released by police on Sunday appeared to show Carzis with his hands up a woman's skirt while outside his business in La Mesa.

When Carzis was approached by local news media outside his storefront on Monday, the 77-year-old was captured on video pushing reporters and photographers while shouting obscenities at them.

One reporter said Carzis shoved her camera equipment to the ground before then also pushing her, according to FOX5 San Diego.

Video from KUSI News also showed him continuing to strike, threaten and yell other profanities at members of the local media before going into his store and locking himself inside.

Members of the community said that over the past year, there have been a growing number of complaints against Carzis. One woman who asked not to be named told FOX5 she had an inappropriate encounter with the store owner.

"Then he pinched my stomach, grabbed my stomach and said, 'You need to lose weight,'" she told FOX5. "Then I go home and I'm just in tears because I've never been fat-shamed like that."

Another resident, Matthew Wietzke, told CBS8 that Carzis has been "catcalling" and "cussing at people" walking by his store. "It takes away from the family vibe of this place," Wietzke said Monday.

FLORIDA MAN ATTEMPTS TO HIDE UNDERWATER FROM COPS, GETS ARRESTED AFTER COMING UP FOR AIR, POLICE SAY

Court records obtained by FOX5 showed Carzis was involved in a criminal case in 2013, and two civil suits for harassment: one filed by a woman in 2013 and another by a man in 2015.

On Monday night, the La Mesa Police Department said that officers took a crime report for misdemeanor battery and felony vandalism regarding the incident with the media outside the store.

"Mr. Carzis was no longer on the scene when officers went to talk to him and his whereabouts are currently unknown, so he has not been arrested," police said in a statement to CBS8. "We are currently attempting to locate him so we can continue the investigation."

In regards to other videos on social media involving Carzis, LMPD Lt. Greg Runge told NBC7, the 77-year-old also is facing misdemeanor counts of battery and lewd acts in public in connection with separate incidents on Saturday.

Anyone with information on those encounters is asked to contact La Mesa Police at (619)-667-1400.