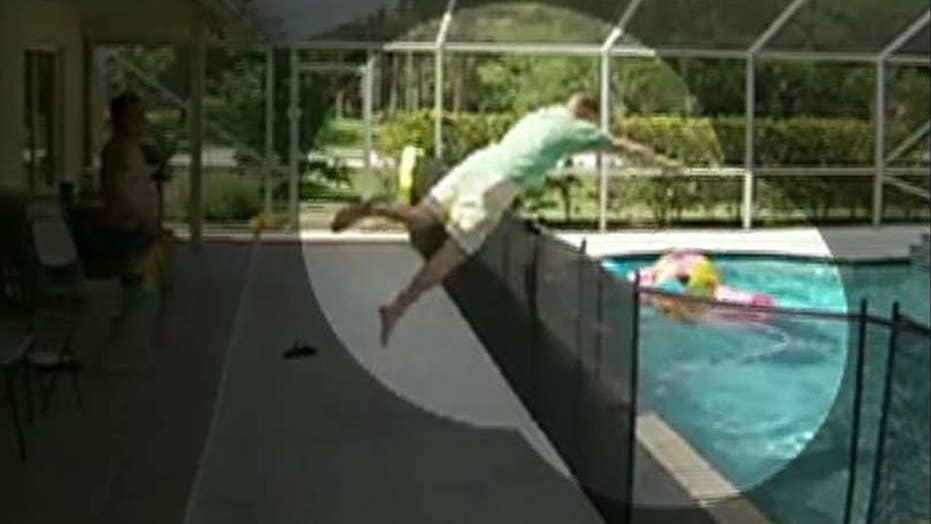 Florida dad dives over pool fence to save son from drowning

Albert Passavanti says his instincts kicked in after his son tumbled into the swimming pool while he was chasing a ball.

A Florida dad is being hailed as “Superman” after a quick-thinking and daring rescue to save his toddler son who fell into a pool on Sunday was captured on dramatic video.

Albert Passavanti and his family were relaxing at a pool in Palm Beach when his 1-and-a-half-year-old son, Rocco, wandered to the water’s edge.

Video captured from a camera shows Rocco quickly scamper inside the open 4-foot fence that surrounds the pool and reach for an inflatable ball floating in the water. When he tumbles in Passavanti – who was watching his son from the shade – jumps up, sprints toward the pool and performs a diving leap over the fence to rescue Rocco.

“It didn’t even cross my mind to go around, it was point A to point B,” he told FOX29. “The second you see it; you get Superman strength and just have to go for it. Whatever you got to do.”

Anna Stewart, manager of the Drowning Prevention Coalition of Palm Beach County, told the station that while she understands why a parent would jump in after their child, it could be dangerous.

“You can drown also, but we know parents are going to do what they’re going to do, right? They’re going to go in and save their children,” she said, recommending that parents bring a floatation device to help them stay above water.

Unsupervised water activity is the number one cause of drowning in the U.S., according to the Drowning Prevention Coalition.

Passavanti is warning parents to take preventative measures, like making sure fences around pools are securely shut and getting swimming lessons for children.