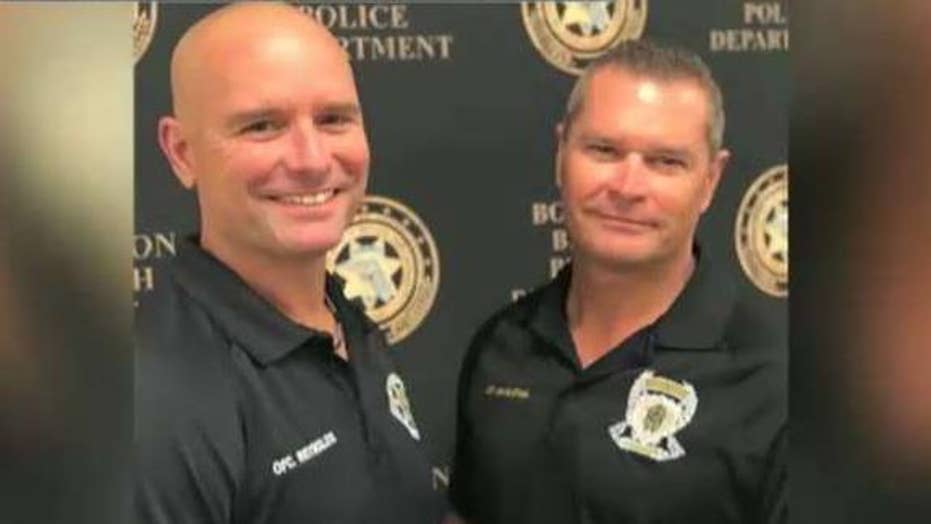 Two law enforcement officers in Florida discover they are related after one of the officers who was adopted as a baby takes a DNA test.

Two Florida police officers, with no connection to one another, were united after a DNA test determined the men were half-brothers.

David Stull, of the Orange County Sheriff's Office, and Eric Reynolds, of the Boynton Beach Police Department, first met last month after Stull reached out to Reynolds in an email, revealing the pair's connection.

“Good morning, my name is David Stull. According to 23andMe, we are half-brothers. I was adopted as an infant and have very little knowledge of my family history, so I have no way of knowing the validity of this," Stull wrote in the email, according to a Facebook post from the police department.

Reynolds had submitted his DNA to 23andMe three years before learning about Stull, police said. He wanted to know about his family's history and health, and "was curious about the possibility of unknown relatives, but never imagined this."

The two, who live just a few hours away from each other in central Florida, met for the first time on July 20. They told the Palm Beach Post they "hugged it out" and took a "shot of vodka" to calm their nerves.

Reynolds, right, said the fact they're both law enforcement officers is "in the DNA." (Boynton Beach Police Department)

The brothers shared the same biological father who didn't know of Stull until recently, according to the news outlet. Stull was born in New Jersey by a mother who he says was in her late teens when she gave birth to him. He was adopted and raised by a "loving" military family, he said.

Reynolds said meeting Stull "was like meeting a clone of me."

“It was overwhelming and exciting and bit of sadness at the same time," he said. "We’ve been texting all the time. We’re alike in so many ways. I have someone I can talk to, trust as brothers and cops. It feels great.”