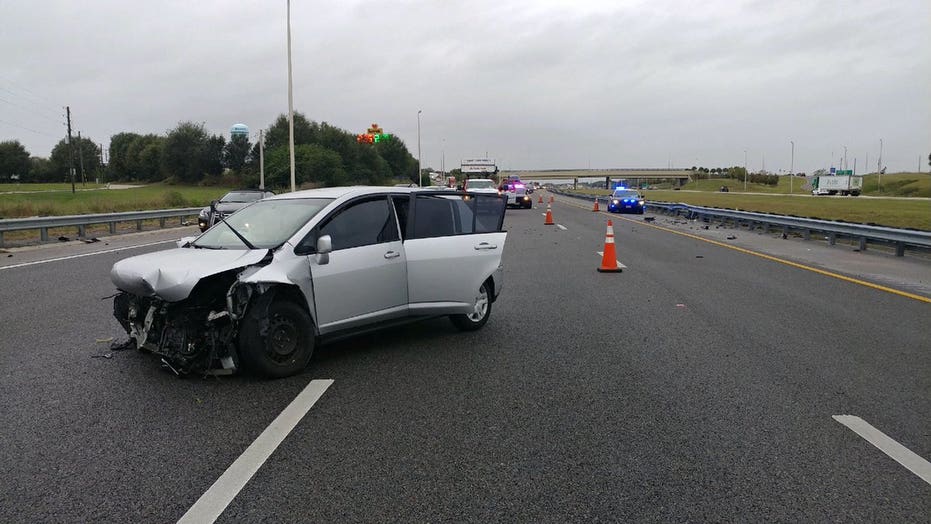 A 3-year-old boy killed Sunday in a hit-and-run crash on a Florida interstate was sitting unrestrained in a passenger’s lap instead of a child seat, authorities said.

The crash occurred on the eastbound I-4 in Polk County around 2 p.m. when a white sedan hit the 2011 Nissan carrying the victim, the Florida Highway Patrol (FHP) said.

The boy, identified as Josiah King, was one of five people in the vehicle when a white sedan merged from the left lane and struck the left rear side of the Nissan driving in the center lane, the Orlando Sentinel reported, citing the FHP.

Investigators are looking for the white sedan that hit the 2011 Nissan and left the scene. (Florida Highway Patrol)

Josiah’s 21-year-old mother, Yahkirioth Swain, lost control of the vehicle and hit the guardrail at the center median, according to local reports.

HIT-AND-RUN DRIVER PLOWS INTO GROUP OF KIDS IN FRONT OF MASSACHUSETTS HOME, SPEEDS AWAY

The 3-year-old, who was on the lap of a passenger in the backseat, died of his injuries at Lakeland Regional Health Medical Center, WFLA-TV reported. Swain and the other passengers, ages 7, 14, 17, and 27, were all wearing their seatbelts and suffered minor injuries.

A 3-year-old sitting on the lap of a passenger in the backseat of a 2011 Nissan died following a hit-and-run crash Sunday, authorities said. (Florida Highway Patrol)

The driver of the sedan failed to stop following the crash.